Fort Defiance ( Navajo: Tséhootsooí) is a census-designated place (CDP) in Apache County, Arizona, United States. It is also located within the Navajo Nation. The population was 3,624 at the 2010 census. [3]

The land on which Fort Defiance was eventually established was first noted by the U.S. military when Colonel John Washington stopped there on his return journey from an expedition to Canyon de Chelly. [4] Fort Defiance was established on September 18, 1851, by Col. Edwin V. Sumner to create a military presence in Diné bikéyah (Navajo territory). Sumner broke up the fort at Santa Fe for this purpose, creating the first military post in what is now Arizona. [4] He left Major Electus Backus in charge. [4]

Fort Defiance was built on valuable grazing land that the federal government then prohibited the Navajo from using. As a result, the appropriately named fort experienced intense fighting, culminating in two attacks, one in 1856 and another in 1860. The next year, at the onset of the Civil War, the army abandoned Fort Defiance. Continued Navajo raids in the area led Brigadier General James H. Carleton to send Kit Carson to impose order. The fort was reestablished as Fort Canby in 1863 as a base for Carson's operations against the Navajo. General Carleton's "solution" was brutal: thousands of starving Navajo were forced on a Long Walk of 450 miles (720 km) and interned near Fort Sumner, New Mexico, and much of their livestock was destroyed. Following completion of this campaign in 1864 the fort was abandoned once again and it was burned by remaining Navajo, with only its walls remaining. The Navajo Treaty of 1868 allowed those interned to return to a portion of their land, and Fort Defiance was reestablished as an Indian agency that year. In 1870, the first government school for the Navajo was established there. 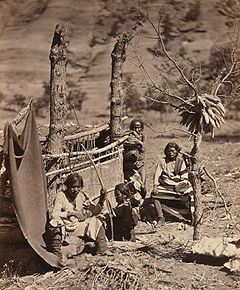 Today, the site of Fort Defiance is populated by buildings dating from the 1930s to the present day used by various governmental agencies including the Bureau of Indian Affairs, Indian Health Service, and the Navajo Nation. The largest of these buildings was the Fort Defiance Indian Hospital until 2002.

The Navajo Nation operates Tséhootsooí Diné Bi'Ólta', a Navajo language immersion school for grades K-8 in Fort Defiance, Arizona. Located on the Arizona-New Mexico border in the southeastern quarter of the Navajo Reservation, the school strives to revitalize Navajo among children of the Window Rock Unified School District. Tséhootsooí Diné Bi'ólta' has thirteen Navajo language teachers who instruct only in the Navajo language, and no English, while five English language teachers instruct in the English language. Kindergarten and first grade are taught completely in the Navajo language, while English is incorporated into the program during third grade, when it is used for about 10% of instruction. [10]