The Las Vegas Monorail is a 3.9-mile (6.3 km) driverless monorail mass transit system located adjacent to the Las Vegas Strip, in Clark County, Nevada, United States. It connects several large casinos in the unincorporated communities of Paradise and Winchester, and does not enter the City of Las Vegas. It is owned and operated by the Las Vegas Monorail Company. In 2013, total annual ridership was roughly 4.2 million, down from a pre- Great Recession peak of 7.9 million in 2007. [5] The monorail is a registered not-for-profit corporation, allowed under Nevada law since the monorail provides a public service. The State of Nevada assisted in bond financing, but no public money was used in construction. [6] [7]

The Las Vegas Monorail began service as the MGM Grand-Bally's Monorail in 1995. This system ran between the MGM Grand and Bally's hotels using two used Mark IV monorail trains that had operated on the Walt Disney World Monorail. Built through a partnership between the two hotels, the MGM-Bally's system's construction was contracted to VSL Corporation. The grand opening party for the monorail featured showgirls from Bally's famed show, Jubilee!, helping groups to the monorail. Characters from The Wizard of Oz greeted the groups on the MGM side. The two trains each ran back and forth on each beam, and were stored at a maintenance building near the Bally's station (this building still stands today, but it has been severed from the beam). [8]

Former logo of the monorail

In 2002, the original system was closed to begin its conversion to the current Las Vegas Monorail system. The beam was extended from Bally's station (now the Bally's & Paris station) north to the Sahara Hotel and Casino. The track was extended south beyond the MGM station to provide for track switching for the trains, as well as a starting point for a potential future southern extension. The original trains were replaced with nine new Bombardier Mark VI monorail trains.

During testing and commissioning, the monorail suffered several malfunctions that delayed the start of passenger service for almost a year. The most serious of these problems related to parts falling from the monorail to the ground under the tracks. [9] After many delays, the finished Las Vegas Monorail opened to the public on July 15, 2004 with the completion and testing of "Phase 1".

On September 8, 2004, more problems with falling parts led to the closing of the monorail for nearly four months. It reopened on December 24, 2004. A number of repairs were made to the monorail cars during this shutdown. Each time the monorail system required major engineering changes, it underwent a lengthy "commissioning" process to confirm the effectiveness and safety of the repairs. Officials reported that each day the monorail was down cost the system approximately $85,000 in lost fares. [10]

Transit Systems Management officials cited the successful handling of crowds during the 2005 Consumer Electronics Show as proof that the system can handle a major convention.[ citation needed] [11]

On February 2, 2005, the monorail system was shut down due to problems with the electrical system. Reportedly,[ citation needed] [12] a short circuit required replacement of a 30-foot (9.1 m) section of the power rail. The system reopened about 12 hours later.

On November 1, 2005, the County Commission approved a study into the feasibility of an airport extension.

On January 13, 2010, the Las Vegas Monorail filed for Chapter 11 bankruptcy protection. The filing would not affect system operations and will have no impact on the monorail’s hours of operation or service to its customers. [14]

The Las Vegas Monorail again filed for Chapter 11 bankruptcy protection in September 2020, amid the COVID-19 pandemic. [1]

The monorail (Phase 1 of the overall project) begins at the MGM Grand near the south end of The Strip, and runs roughly parallel to the Strip on its eastern side. The monorail passes next to the Convention Center and the Westgate Las Vegas, both with stations, before ending at the Sahara hotel at the north end of the Strip. The ride takes about fifteen minutes to travel its total distance of 3.9 miles (6.3 km).

The monorail generally runs behind the eastern Strip side hotels and casinos, a long block away from the Strip. Usually, it requires a walk-through a casino to get to the Strip, emerging upon the Strip in front of the property. This lack of a direct presence on the Strip along with ticket prices has been a factor in the rather slow acceptance of the monorail. [9]

The Las Vegas Monorail used to be known as the MGM Grand-Bally's Monorail. [18]

The Las Vegas Monorail generates revenue from ticketed passengers and from corporate sponsors. Branding rights for the seven stations and the nine trains are available, and the sponsorship prices are in the millions of dollars. Hansens Beverage sponsored the first monorail train, featuring its Monster Energy drink. [19] Nextel Communications created a totally themed pavilion by branding the largest station, adjacent to the Las Vegas Convention Center. [20] Since the Sprint-Nextel merger in late 2005, Nextel Central has been rebranded as Sprint Central. However, in late February 2008, the Sprint Nextel Corporation terminated its sponsorship contract.[ citation needed]

The Las Vegas Monorail was designed by Gensler of Nevada, engineered by Las Vegas-based Carter & Burgess (now Jacobs Engineering Group, Inc.) and constructed by Granite Construction, Inc. of Watsonville, California, one of the largest civil contractors in the United States.

A one ride ticket costs $5. These, alongside unlimited ride tickets good for one and three days can be purchased with cash or major credit cards at ticket booths and machines. QR-coded tickets may be purchased online and scanned at the gates, and these offer 1-5 and 7 day unlimited fares. Nevada residents may purchase one ride fares for $1 or a 20-ride ticket for $20. There are no child fares, although passengers aged 5 and under ride free.

Stations listed from north to south: 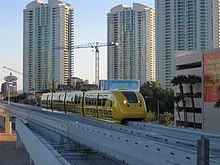 The monorail uses nine Bombardier MVI trains that have four cars in each of the fully automatic trains. The guideway is built to the " ALWEG" track standard. For the first seven years, the line only ran as the MGM Shuttle, between MGM and Bally's stations. During this time, two ex- Walt Disney World Mark IV monorail trains were used. [23] [24] [25] [26] [27] Though the Las Vegas and related train equipment appear superficially similar to the original ALWEG design (as exemplified by the Seattle system), their suspension and propulsion systems differ substantially. A Seattle train may be walked end-to-end which is impossible on a Las Vegas or Florida train. The ALWEG Mark VI system used in Las Vegas Monorail consists of two inline large truck tires per car that support the load over the concrete guideway with a rectangular cross section and eight guide tires that straddle the guideway from both sides. [28] The total capacity of the four-car trains is roughly equivalent to two articulated buses at 80 seated and 160 standing passengers. [29] The maximum speed is 50 miles per hour (80 km/h), although that speed is only reached during one short straight segment of the line.

Phase 2, a 2.3-mile (3.7 km) long extension along Main Street to Downtown Las Vegas was planned, with new stations at the Stratosphere Hotel, Charleston Boulevard, Bonneville Avenue and Main Street Station. Construction was planned to begin in 2005 with service starting in 2008. However, the anticipated funding from the federal government was not allocated in 2004, so the plans were put on hold. On January 27, 2005, the federal government announced that it would not provide money for the $400-million project.

The plan was to open the system in January 2004, and for it to cover its debts and operating expenses by attracting 19 to 20 million riders. Since the system was not only delayed in opening, but later shut down for four months, income was not as great as organizers had hoped. This reportedly is a contributing factor for the government's denial of Phase 2 funding.

Phase 2 was revised to instead extend the monorail system south from the MGM Grand Station to McCarran International Airport. [30] Providing monorail service to the airport has been an unpopular idea with limousine and taxicab operators in the city, as trips to and from the airport form a major portion of their business. [31] Several hotel and casino owners on the Strip continue to support the project, and are more supportive of an extension to the airport than one to downtown Las Vegas. [32]

On December 7, 2006, Clark County commissioners granted permission for the proposed extension to McCarran Airport. Funding had not yet been identified. [33]

On September 9, 2008, the monorail company provided details of the proposed expansion to the Las Vegas Convention and Visitors Authority board. The intended airport extension would begin at the new Terminal 3, with the first stop near Terminal 1, turn north on Swenson Street, then continue west on Tropicana Avenue before turning north at Koval Lane to meet up with the existing system behind the MGM Grand. [34] This route was proposed to be built with private funds and would have added approximately four miles to the existing route, doubling the length of the system.

When the monorail company announced details of the extension in September 2008, the airport extension was to be built with private funds and was expected to be built by 2012. [34] However, as of March 2011, the Las Vegas Monorail Company was still in the planning phases of the proposed extension to McCarran International Airport with a proposed stop on the UNLV campus. [35]

The monorail company announced in May 2015 that it is proposing instead an extension to the Mandalay Bay Resort and Casino and an infill station at the Sands Expo & Convention Center. [36] Subsequently, the Regional Transportation Commission of Southern Nevada announced that a new underground light rail system under the Las Vegas Strip, which would connect Downtown Las Vegas with the airport, is in the long-term planning phase. [36]

In March 2018, the Clark County Commission approved a proposed extension to Mandalay Bay, putting the monorail closer to the soon to be constructed Allegiant Stadium. The monorail company planned to start construction on the extension in June 2018 and have it completed by September 2020, in time for the completion of the stadium and Las Vegas Raiders inaugural season in Las Vegas. [37] In November 2018 it was confirmed that two new Monorail stations would be built; one at Mandalay Bay and another at the MSG Sphere with completion by 2021. [21] In May 2019, it was revealed that lack of funding has delayed the start of construction on a Mandalay Bay extension. [38] As of March 2020, there is no timetable to begin construction on an extension nor a completion date.