From Wikipedia, the free encyclopedia
Stadium in Las Vegas, Nevada

Cashman Field is a soccer stadium in Downtown Las Vegas, Nevada. It is primarily used for soccer as the home field of Las Vegas Lights FC of the USL Championship. It was formerly the home of the Las Vegas 51s Minor League Baseball team of the Triple-A Pacific Coast League. The field is adjacent to Cashman Center, an exhibit hall and theater operated by the City of Las Vegas. [8] The complex is named for James "Big Jim" Cashman and his family, who have been Las Vegas entrepreneurs for several generations. 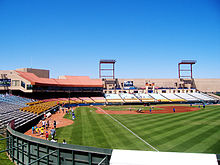 Cashman Field opened in 1983 as the home field of the new Las Vegas Stars, [9] the former Spokane Indians of the Triple-A Pacific Coast League, who had relocated to Las Vegas following the 1982 season. The symmetrical field boasted dimensions of 328 feet (100 m) down the left and right field foul lines, 433 feet (132 m) feet to center field, and 364 feet (111 m) feet to the power alleys in right-center and left-center fields. The ballpark opened with a maximum seating capacity of 9,334. Its first professional baseball game was a Major League Baseball (MLB) exhibition held on April 1, 1983, in which the San Diego Padres faced the Seattle Mariners in front of 13,878 fans. The Cashman Field attendance record of 15,025 was set on April 3, 1993, for an exhibition game between the Chicago White Sox and Chicago Cubs.

Its final professional baseball game was played on September 3, 2018. With the 51s trailing 3–2 in the bottom of the ninth inning and a runner on base, first baseman Peter Alonso hit a walk-off home run to left field giving Las Vegas a 4–3 win over the Sacramento River Cats. [11] The 51s (renamed the Aviators) moved to Las Vegas Ballpark in Summerlin in 2019. [12]

In July 2017, Las Vegas Lights FC, a team in the league then known as the United Soccer League and now as the USL Championship, was announced to begin playing at Cashman Field in 2018. Lights FC played their first game on February 10, 2018, an exhibition match against the Montreal Impact of Major League Soccer (MLS) in front of a crowd of 10,383 people. [13] Cashman Field previously hosted MLS exhibition games between the LA Galaxy and San Jose Earthquakes, dubbed the California Clasico in 2016 and 2017. [14] [15]

The original configuration of Cashman Field is more suited for soccer than other former baseball parks. With center field at a right angle and all the foul territory behind first and third base at equal distance, the field is in a square shape and seats are close to the field for soccer. [16] The Lights began renovations to make Cashman Field a soccer-specific stadium in April 2019 after the Aviators baseball team formally gave their 60-day lease termination notice that made the Lights the primary tenant. [17] [18]

In addition to Triple-A baseball, the stadium hosted the Oakland Athletics' first 16 home games of the 1996 season due to renovations taking place at the Oakland–Alameda County Coliseum.

The field hosted the Big League Challenge from 2001 to 2003, a home run derby for star Major Leaguers after the conclusion of the MLB season.

In 2017, the stadium hosted the Mexican Baseball Fiesta, a series of two games between the Naranjeros de Hermosillo and the Águilas de Mexicali of the Mexican Pacific League.

Cashman Field had been suggested as a temporary stadium in the city's efforts to woo either a Major League Baseball expansion team, or an existing team desiring to move. The stadium would have served as home field until a permanent facility could be built. It had come up in the city's talks to lure the former Montreal Expos, Florida Marlins, and Oakland Athletics. However, the park would have needed considerable expansion, particularly in seating capacity, in order to host a team. The substantial costs which would be incurred in expansion and construction of a new stadium, as well as MLB concerns over Las Vegas' legalized gambling, have so far kept the city's proposals from achieving success.

Though the original Cashman Field hosted several American football teams in the 1960s (including the UNLV Rebels football team, the Las Vegas Cowboys of the Continental Football League in 1969 and at least one American Football League exhibition), it ceased doing so around 1971 with the opening of Sam Boyd Stadium, which was designed for football.

The stadium was also considered for use as the home stadium for the Las Vegas Locomotives of the United Football League starting in 2011; however, the team remained at Sam Boyd Stadium in Whitney for that season's only home game. The team again announced negotiations with Cashman for the 2012 season but decided again to remain at Sam Boyd for at least the first two games of the season. [20] The league ceased operations before the season's other two home games, which Sam Boyd had not yet agreed to host, could take place.

Several concerts were held at the field such as Jerry Cantrell and Metallica on September 12, 1998. [21] [22] Other concerts have included The Beach Boys, [23] Earth, Wind & Fire and The Doobie Brothers [24]

During the last years of the 51s' stay at Cashman Field, players and staff from both the 51s and visiting teams criticized the facility. While it had been state-of-the-art when it opened, by the turn of the millennium it was considered far behind the times.

Players complained that the field was hard on their backs and knees. The bullpens and clubhouse were also considered second-class. The weight room was smaller when compared to other Triple-A stadiums, with infielder Ty Kelly calling it "basically just a room... not an actual weight room". The batting cage was also a point of concern for the players. It was a single lane, which was only accessible by walking out of the clubhouse to the parking lot. Johnny Monell described the cage as one likely to be found at a high school facility and not up to par for a Triple-A stadium. [25]

During a 51s game on August 22, 2015, the stadium sewage system backed up, causing raw sewage to flow into the dugouts. The smell was so strong that players were forced to watch the rest of the game from chairs on the field. [25] Team president and chief operating officer Don Logan said, "It's disappointing that Vegas has the worst facility in our league when we have such a great town with the greatest hotels, the greatest dining, the greatest shopping. It's not becoming of this community to have a place like this." [25]

Pacific Coast League commissioner Branch Barrett Rickey expressed his concerns about the feasibility of the continuous usage of Cashman Field as a Triple-A ballpark. In a letter to the Las Vegas Convention and Visitors Authority which owned and operated the facility, he wrote that ensuring that the upgrades necessary to keep Cashman at something approaching Triple-A standards would require spending "many tens of millions of dollars" that would still not be enough to make the stadium "an optimal long-term solution." He also added that Cashman's days of useful life were "well behind it," and that most MLB teams opted to place their top affiliations in "far less appropriate markets" than Las Vegas rather than deal with Cashman's shortcomings. [26] In 2019, Cashman was replaced as a baseball park by Las Vegas Ballpark in Summerlin.

Redevelopment and the future of Cashman Field

In 2017, the Las Vegas Convention and Visitors Authority, which had been the primary operators of Cashman Center and Cashman Field, turned over all operations to the City of Las Vegas. [27] Since that time, the city has attempted to redevelop and revitalize the site, even soliciting ideas from the public. [28] In 2018, the site was considered for a proposed stadium for the National Football League's Oakland Raiders during the team's relocation bid, however it was beat out by a larger site closer to the Las Vegas Strip. The city, so far, has been unsuccessful in its attempt to redevelop the site, with the convention halls and theater remaining closed, and only Cashman Field hosting events.

On June 5, 2019, the Las Vegas City Council voted to begin negotiations with the Renaissance Group to redevelop the Cashman Center and adjacent land also owned by the city to feature a new 25,000-seat soccer stadium as well as retail, hotels and residences. [29] If an agreement is reached within the 180 day time limit (expiring on December 3, 2019), Lights FC owner Brett Lashbrook has agreed to sell the team to Boston-based Baupost Group in effort to make the Lights a Major League Soccer expansion franchise. Under the Renaissance Group's proposal, Cashman Field's current playing field would remain as a practice field for the Lights FC.

The original Cashman Field was built in 1947 on a site at Las Vegas Boulevard and Bonanza Avenue. [30] The stadium was used for football and rodeos before the first baseball game was held on May 21, 1948. [30] The stadium was designed primarily for football, rodeo, concerts and boxing with one large grandstand. For baseball this meant all the seats were along first base line. The stadium was home to the Las Vegas Wranglers from 1947 to 1952 and again from 1957 to 1958. [30] Boxing matches were also held at the facility. [31] The first professional football game in Las Vegas was held at the stadium in 1964 when the American Football League then- Oakland Raiders played the then- Houston Oilers. [32]