From Wikipedia, the free encyclopedia
This article is about the current MGM Grand in Las Vegas. For the first casino hotel with that name, see Bally's Las Vegas.

Located on the Tropicana – Las Vegas Boulevard intersection, pedestrians are not allowed to cross at street level. Instead, the MGM Grand is linked by overhead pedestrian bridges to its neighboring casinos: to the south across Tropicana Avenue, the Tropicana, and to the west across the Strip, New York-New York.

The property was originally the site of the Golf Club Motel during the 1960s. [1] In 1972, Tom Wiesner co-founded Southwest Securities Development Company, and later founded Wiesner Investment Company. [2] In November 1973, Southwest Securities Development was planning the Airport Marina Hotel, to be built at the site of the 170-room Golf Club Motel, which was located near McCarran International Airport. Southwest planned to renovate the motel structure and add a 14-story addition with 518 rooms. Fred Harvey Company would serve as the operator of the hotel, its restaurants, and other areas of the resort. Fred Harvey had previously opened hotels in other parts of the United States under the Airport Marina name. Southwest also planned to construct a 28,400 sq ft (2,640 m2) casino that would operate separately from Fred Harvey. [3]

The 700-room Marina, located at 3805 South Las Vegas Boulevard, was built by Wiesner Investment Company and was opened in 1975. [2] [4] In 1989, Wiesner and his partners sold the Marina to Kirk Kerkorian, [5] who also bought the Tropicana Country Club, located behind the Marina and across Tropicana Avenue from the Tropicana and San Rémo hotels to obtain the site that would become the home of the MGM Grand. Kerkorian saw the Marina as a stable and solidly built resort, and decided not to destroy the hotel, but to build around it. [6] During that time, the Marina was known as the MGM-Marina Hotel. [7] [8] [9]

The Marina closed on November 30, 1990, and ground was broken for the new casino hotel complex on October 7, 1991. The Marina hotel building still exists as the west wing of the main hotel building. [7] [8]

When the latest MGM Grand opened on December 18, 1993, it was owned by MGM Grand Inc. At that time it had an extensive Wizard of Oz theme, including the green " Emerald City" color of the building and the decorative use of Wizard of Oz memorabilia. After entering the casino's main entrance, one would find themselves in the Oz Casino facing Emerald City. Dorothy, the Scarecrow, the Tin Man, and the Cowardly Lion were seen in front of the city. The Emerald City attraction featured an elaborate yellow brick road walk-through, complete with the cornfield, apple orchard, and haunted forest, as well as audio-animatronic figures of Dorothy, the Scarecrow, the Tin Man, the Cowardly Lion, and the Wicked Witch of the West. It would end at the door of the city, leading inside for a performance of "The Wizard's Secrets". When MGM Grand began its extensive refurbishment in 1996, the Oz Casino was the first to go. The Emerald City was completely demolished, and the Emerald City Gift Shop was moved to a new shopping section of the casino. The store remained open until early 2003.

When the MGM Grand opened, the intention was to create a destination hotel in the Las Vegas area by including the MGM Grand Adventures Theme Park behind the casino. The plan was to make the Las Vegas Strip more family friendly by providing activities for those too young to linger inside the casino. The theme park performed poorly and did not reopen for the 2001 season. The site was redeveloped as a luxury condominium and hotel complex called The Signature at MGM Grand, opened in 2006.

The resort's original entrance consisted of a giant lion head, made of fiberglass and blocky in appearance, with visitors entering through the lion's mouth. [10] The lion was a cartoon-like version of MGM's logo, Leo the Lion. The MGM Grand performed unusually poorly with Asian gamblers in its first years of existence; a study by the management found that many Chinese patrons found it bad luck to walk through the jaws of a lion and avoided the hotel as a result, part of why the entrance was renovated to remove this feature. [11] [12]

The Las Vegas Monorail was built to connect MGM Grand to the Bally's hotel-casino in 1995. The coming-out party for the monorail, on behalf of Bally's, consisted of showgirls and guys from Bally's famed show, Jubilee!, helping groups to the monorail. Characters from The Wizard of Oz greeted the groups on the MGM side. The track was later updated to become the southernmost section of the Las Vegas Monorail. The MGM Grand station was refurbished, the trains were replaced with Bombardier M-VI's, and the track was extended beyond the southern station to provide for track switching for the trains, as well as a starting point for a potential future southern extension to the monorail line.

In May 1996, MGM Grand Inc. announced a 30-month, four-phase renovation of the resort that would cost more than $250 million. The project would include replacing the property's lion entrance with a six-story gold lion structure. The first phase was to begin in June 1996, and would focus on the resort's restaurant, food court and arcade area, with the addition of several new restaurants. The second phase would include the $15 million reconstruction of the lion entrance. Other changes would include a 300,000 sq ft (28,000 m2) convention center, to be built at a cost of $60 million; a $60 million retail and entertainment complex, including theme restaurants and nightclubs, to be built adjacent to the theme park; a new entrance, to be built along Koval Lane at a cost of $5 million, scheduled to begin in mid-1997; a $30 million renovation of 52 suites on the penthouse level; and $11 million to upgrade parts of the casino. The final phase would incorporate a $17 million entertainment theme at the resort's vehicle entrance on Tropicana Avenue. Other changes would include a $15 million renovation of the resort's Emerald City entertainment area, and an additional 2,000 parking spaces to be added at a cost of $13 million, for a new total of 11,000 spaces. [13] [14] Terrence Lanni, the chairman of MGM Grand Inc., said he wanted customers to "feel like guests coming to a premiere of one of the world's greatest movies. When we're completed, every aspect of this property will bespeak entertainment." [14] The former restaurant, retail and arcade area was redesigned into the Studio Walk, an area resembling a Hollywood sound stage and featuring various restaurants and shops. [10] 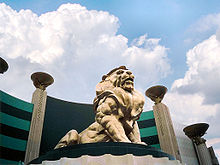 A statue of Leo, the MGM lion

Demolition of the lion entrance began on May 13, 1997, and was expected to take two weeks, while the $250 million renovation project was expected to be finished by late 1998. The new facade was expected to cost $40 million to construct. [10] [15] In November 1997, the property installed 18 promotional and entertainment LED screens, including 15 outside the resort. [16] Installation of the lion statue was underway in December 1997, with the addition of a 5,000-pound paw. Assembly of the 100,000-pound statue was expected to be finished later that month. [17] The statue weighs 50 tons, and at 45 feet (14 m) tall, on a 25-foot pedestal, [17] is the largest bronze statue in the U.S. [18] The new facade also included 11 statues of winged Atlas-like men holding 16-foot diameter bowls. The statues were made of bronze-finished fiberglass and accompanied the lion statue, [19] along with LED screens and water fountains. [18] Work on the statue and accompanying fountains was expected to be finished in February 1998. [20] The resort's 380,000 sq ft (35,000 m2) conference center opened in April 1998. [21] The conference center, a pool, and a spa were constructed on 15 acres of land previously occupied by a portion of the theme park and a parking lot. [10]

MGM Grand, with sign promoting it as The City of Entertainment, now removed

In 2000, in an attempt to appeal to a more "mature" clientele, the hotel underwent a major renovation, and almost all traces of the Oz theme were removed. The theme is now more of the Art Deco era of classic Hollywood, and the hotel started billing itself as The City of Entertainment. More recently, the resort has used the phrase "Maximum Vegas", referring to the vast amount of activities MGM Grand offers its guests.

On April 26, 2000, MGM opened a new satellite registration/hotel check-in center at McCarran International Airport. This was the first of its kind opened by a hotel company at any United States airport. [22] However, this airport check-in center appears to have closed in late 2013.

In 2005, MGM opened the West Wing, a renovation of the original Marina Hotel rooms.

In October 2011, MGM began a renovation in which all of its rooms and suites in the main tower were fully renovated, along with the casino floor and other public areas. This has provided the hotel with a more contemporary room design. The work was completed in September 2012.

In June 2017, MGM Resorts International held a groundbreaking for a 250,000 sq ft (23,000 m2) expansion of the resort's convention conference center, for a total of 850,000 sq ft (79,000 m2) upon completion. [23] [24] The expanded conference center was topped off in January 2018, [25] and was opened in January 2019. It was built at a cost of $130 million. At the time, the hotel had a 90 percent occupancy rate. That month, plans were announced by MGM Resorts to eventually redevelop the resort's entrance on Las Vegas Boulevard to provide easier pedestrian access. The redeveloped area would include restaurants and retail space accessible to pedestrians, but was not expected to begin construction during 2019. MGM Resorts also planned to eventually redevelop the hotel's entrance on Tropicana Avenue in the years to come. [26]

In January 2020, MGM Resorts announced that it would sell the resort to a joint venture consisting of MGM Growth Properties and The Blackstone Group. MGM would own 50.1 percent of the joint venture, and Blackstone would own the remainder. The MGM Grand would be leased to MGM Resorts, which would continue to operate the resort. [27] [28] The deal was finalized a month later. [29]

A parody of the MGM Grand was featured in the BMX video game Mat Hoffman's Pro BMX 2. Leo the Lion was replaced with dragons.

The MGM Grand was among many casinos at which the MIT Blackjack Team gambled in the book Bringing Down The House.

The MGM Grand is the home base of David Whele in Dominion.

The MGM Grand is very well known to be the prior location of rapper Tupac Shakur before his assassination. He was reported to be watching the Bruce Seldon vs Mike Tyson boxing match with his collective members including Suge Knight.

The Lion Habitat in the MGM Grand

The slot machines at the MGM Grand range from 1¢ to $1,000 and include progressive slots, video poker, and multi-game machines. There is a special High Limit Slots area, featuring slot machines with payouts up to $500,000.

The race and sports book is a state of-the-art betting area that features thirty-six 60-inch plasma TVs, along with twenty-four 42-inch plasmas. Bets are offered on a range of sports including soccer, football, boxing, MMA and more. They are also the first room to offer what they call "SkyBoxes". These boxes can hold up to ten guests and come with beverage servers and complimentary food. [33]

The Mansion at MGM Grand

The hotel rooms are located in several buildings including:

The Signature at MGM Grand

The Signature at MGM Grand is a condo hotel project by MGM Mirage and Turnberry Associates, who teamed up to build the three currently open Signature at the MGM Grand towers. The 38-story, 475-foot (145 m) tall structures have 576 all-suite units each and were priced from $450,000 to more than $2.0 million. Signature is located on the property where the MGM Grand Adventures Theme Park once stood. Each tower has its own private pool with cabanas as well as access to MGM Grand pools. Additional guest/owner amenities at The Signature include a Starbucks, meeting rooms, exercise room, bar and restaurant. Each tower is connected with walkways including moving walkways for the connection to the MGM Grand.