From Wikipedia, the free encyclopedia
This article is about the hotel. For other uses, see The Mirage (disambiguation).
Casino hotel in Las Vegas, Nevada

The Mirage is a 3,044 room Polynesian-themed casino resort located on the Las Vegas Strip in Paradise, Nevada, United States. The resort was built by developer Steve Wynn and is currently owned and operated by MGM Resorts International.

The original marquee sign in front of the Mirage is the largest free standing marquee in the world. The resort is connected by a free tram to the Treasure Island Hotel and Casino neighboring the hotel's property to the north.

Built environment: The Mirage seen from The Venetian, 2008, showcasing the Beatles-themed Love show.

The Mirage was built on a portion of the site formerly occupied by the Castaways, which closed in 1987 to make room for the new resort. [1] The Mirage was built by developer Steve Wynn and designed by architect Joel Bergman[ citation needed] and interior designer Roger Thomas. [2] Landscape architect Don Brinkerhoff worked on an artificial volcano located in front of the resort. [3]

The Mirage was proposed with an initial cost of $565 million. [4] Financier Michael Milken helped finance the project by selling $525 million worth of mortgage bonds. [5] The Mirage was the first resort that was built with the money of Wall Street through the use of junk bonds.[ citation needed] The project went over budget, [4] and was the most expensive hotel-casino in history, with a construction cost of $630 million. [6] The hotel's distinctive gold windows get their color from actual gold dust used in the tinting process.

The Mirage's construction is considered noteworthy in that Wynn had set a new standard for Vegas resorts, and is widely considered to be the father of today's Las Vegas. Prior to The Mirage's opening, the city was experiencing a decline in tourism that began in the 1970s, especially around the time that the state of New Jersey legalized gambling and tourists (in particular those on the East Coast) began to frequent the casinos of Atlantic City. Also, this was a time when Las Vegas was no longer considered a fashionable destination, so a new, high-profile, project was necessary to jump-start the ailing industry. [4] Wynn planned for the resort to feature boxing matches to compete against the Las Vegas Hilton and the adjacent Caesars Palace. [7]

The project's working name was the "Bombay Club". [8] Wynn initially considered naming the resort the Golden Nugget, [4] after his Golden Nugget hotel-casino in downtown Las Vegas. However, Wynn and others involved with the new resort knew that it would need a different name. Otherwise, they believed that the two properties would become known as "the old one" and "the new one". Wynn chose "The Mirage" because of the resort's South Pacific theme. In 1988, to avoid confusion, Wynn purchased the rights to the Mirage name from two other businesses, the La Mirage Casino and the Mirage Motel. Both businesses received $250,000 to change their names. [7] [4] 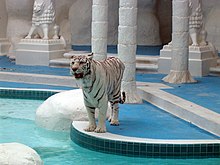 A white tiger in the Mirage habitat.

The Mirage, initially scheduled for an opening in early December 1989, [7] was opened early on November 22, 1989. [4] At the time of its opening, The Mirage was the largest hotel in the world, with 3,044 rooms. The hotel tower, standing 29 stories, was built out in a Y-shape design, a concept that was later copied by Las Vegas' Treasure Island, Monte Carlo, and Mandalay Bay resorts. The hotel's top five floors were used exclusively for high roller rooms and penthouse suites. The Mirage was the first new resort to be built on the Las Vegas Strip in 16 years, [5] after the completion of the MGM Grand in 1973. [4] When it opened, The Mirage was the first casino to use security cameras full-time on all table games. [9]

Starting in February 1990, The Mirage was the venue for the Siegfried & Roy show, held in the resort's 1,500-seat showroom. [5] The two headliners combined magic and the use of wild animals. The show closed in 2003 after performer Roy Horn was critically injured by Montecore, one of the 650-pound white tigers used in the show.

In 1993, The Mirage hosted an extended run of the Cirque du Soleil show Nouvelle Expérience in a tent in The Mirage parking lot. It was during this time that Steve Wynn decided to invite Cirque to create Mystère for the soon-to-be-built Treasure Island resort next door. Finally returning to where they began in Las Vegas, Cirque du Soleil has a permanent production at The Mirage, Love. [10]

In March 2000, Danny Gans started performing at the resort. Prior to that time, Gans performed at the Rio Hotel and Casino. [4] Gans took over the marquee in 2004, becoming the resort's main entertainment attraction. In December 2006, the Beatles-themed REVOLUTION ultra-lounge opened. It was the first time Cirque du Soleil was involved in the development of a nightlife venue, operated by The Light Group.

Gans left The Mirage in February 2009 to star in a show at the Encore Las Vegas. [12] In 2009, ventriloquist and 2007 America's Got Talent winner Terry Fator began a 5-year run at the hotel.[ citation needed] Also in 2009, The Mirage was featured on The Amazing Race 15, where one team member had to bungee the other into the air to grab a bouquet of flowers presented in the Love theater.

In November 2012, The Mirage casino became the second Las Vegas casino to offer Geoff Hall's Blackjack variant Free Bet Blackjack, after the Golden Nugget Casino. [13] In 2014, The Mirage was featured in The Amazing Race 24, where teams had to replace the lightbulbs in the letter 'I' in 'Mirage'. [14]

In 2015 MGM Resorts International announced that it would place the Mirage and other properties into a real estate investment trust. MGM would continue to operate The Mirage. [15] 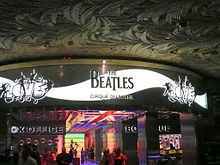 Love entrance at the Mirage