It originally opened in 1959 as the 180-room Flamingo Capri motel, located adjacent to the Flamingo hotel and casino. Ralph Engelstad purchased the property in 1971, and added a casino the following year. In 1977, the hotel had 650 rooms, after the completion of its Imperial Palace Tower. The resort was later reopened as the Asian-themed Imperial Palace in 1979.

Several additional hotel towers were added during the 1980s, bringing the resort's room count to an ultimate total of 2,637, after the completion of a fifth and final hotel tower in 1987. At the time of Engelstad's death in 2002, the resort had 2,600 employees and was the second-largest privately owned hotel in the world.[ citation needed] In 2012, the resort was renamed as The Quad. The resort was renamed again as The Linq in 2014, after a $223-million renovation.

The property began as the $2-million, 180-room Flamingo Capri motel, owned by George E. Goldberg and Bill Capri. The motel was built directly north of the Flamingo Hotel and Casino, where Capri was an employee. The motel began construction in May 1959, [3] with a planned completion date of August 15, 1959. [4] Douglas Honnold and John Rex, both of Beverly Hills, California, were the architects. Maurice N. Aroff of Beverly Hills was the general contractor. [4] The Flamingo Capri opened in 1959. [5] The original Flamingo agreed to provide hotel services to guests at the Capri. [3] [4]

Ralph Engelstad purchased the motel in 1971, and added a casino in 1972. [3] Prior to the addition of a casino, the motel had 250 employees. [6] In 1973, four motel buildings from the Flamingo Capri were relocated and converted to become part of Engelstad's other property, the Kona Kai motel. [7] Engelstad's construction company added a three-story wing at the east end of the motel, as well as a northern addition, [3] both of which opened in 1974 along with the Shangri-la pool. [3]

By 1976, the motel was being operated as part of the Best Western hotel chain, while retaining the Flamingo Capri name. The new Imperial Palace Tower, which raised the number of rooms from 300 to 650, was completed in July 1977. [8]

The property re-opened as the Asian-themed Imperial Palace Hotel and Casino on November 1, 1979, [3] with the number of employees increasing to 1,000. [6] Merlin J. Barth was the architect of the resort, [9] which was themed after an Asian palace. [10] Engelstad chose the Oriental theme, and Barth chose blue tile imported from Japan for the roof of the resort, having been influenced by Japanese temples. The interior heavily featured the Oriental theme as well, and included carved dragons and giant wind chime chandeliers. [6]

In 1984, a couple from Missouri were assaulted in their guest room by a man dressed as a hotel employee. They were beaten, bound and gagged, and the wife was raped. The assailant was never caught. The couple sued the Imperial Palace, claiming that the hotel did not provide adequate security. The lawsuit lasted until at least 1989, with allegations that hotel employees destroyed evidence relating to their security practices. The case was ultimately settled on undisclosed terms. [20]

The lawsuit would lead indirectly to more trouble for the casino. In 1988, several employees, angry about being placed on leave as punishment for talking to the plaintiff attorney, began speaking to the Gaming Control Board and local media about two Nazi-themed parties Engelstad had held at the Imperial Palace. The parties were held in Engelstad's so-called "war room", which featured a large collection of World War II Nazi memorabilia, including a portrait of Engelstad in the likeness of Hitler. A national controversy ensued. Engelstad claimed the collection was purely of historical interest, and not meant to glorify the Nazis. The Gaming Control Board recommended that Engelstad lose his gaming license and be fined $200,000 for reflecting poorly on the reputation of the Nevada gaming industry. An agreement was ultimately reached whereby Engelstad kept his license, but paid $1.5 million in penalties. [20]

In 1987, the Governor's Committee for the Handicapped named the Imperial Palace as "Employer of the Year" for its extensiving hiring of handicapped people. [24] A three-phase expansion began in August 1987 and concluded in July 1989. [21] [25] The three-phase expansion included the addition of a new Olympic-size swimming pool, a heated spa, and a poolside bar. [6] The final phase of the expansion – including a race & sportsbook, and fitness center – extended the resort to the sidewalk along Las Vegas Boulevard. The sportsbook was completed in September 1989, [6] and a drive-through option was created in 1991, making the Imperial Palace the first casino in Las Vegas to offer such a feature. The drive-through sportsbook, located on Koval Lane behind the hotel, became popular among customers. [26] In 1991, the President's Committee on Employment of People with Disabilities named the Imperial Palace "National Employer of the Year" for its hiring of disabled people. [25] In 1993, an independent 24-hour medical facility serving guests and employees was opened.[ citation needed] In the 1990s, the Imperial Palace's gaming school operated on the main casino floor. [27] [28] In 1997, Engelstad opened a second Imperial Palace in Biloxi, Mississippi. [3]

As of 1997, the Imperial Palace was the 10th largest hotel in the world and the world's largest privately owned hotel. [6] When Engelstad died in 2002, the casino ownership transferred to the Ralph Engelstad and Betty Engelstad Trust. The casino operated as its own limited partnership, Imperial Palace LLC, under the Trust's oversight. At the time of Engelstad's death, the resort was the second-largest privately owned hotel in the world, with nearly 2,700 rooms and 2,600 employees. [3]

On August 22, 2005, Harrah's Entertainment announced plans to purchase the property. The acquisition was completed on December 23, 2005. During a conference call with investors on November 20, 2005, the Chairman for Harrah's, Gary Loveman, noted that both the Imperial Palace and neighboring O'Sheas Casino "are going to require very substantial modifications or complete tear-downs and rebuilds" in order to make room for an expansion of the nearby Harrah's and/or Flamingo hotel-casinos. [29] However, since then, Harrah's has invested millions of dollars into refurbishing both the hotel rooms and the casino itself.

In July 2009, Harrah's announced new plans for the area around the Imperial Palace, O'Sheas, and Flamingo casinos, confirming that the Imperial Palace will not be demolished at this time. Harrah's planned to add approximately 20 restaurants and bars between O'Sheas and the Flamingo. [30] 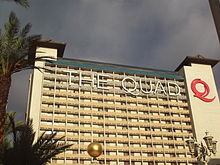 In July 2014, Caesars announced that the Quad would be again renamed The Linq Hotel & Casino [34] in order to join the Linq Promenade, the adjacent shopping and entertainment center that opened in January 2014, following a $223-million renovation of the property. [35] The hotel and casino were renamed on October 30, 2014. [36] 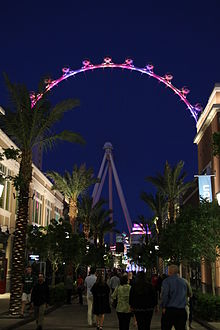 The Linq Promenade is an open-air retail, dining, and entertainment district located between The Linq and Flamingo resorts that began a soft open in January 2014.

In November 2017, Caesars Entertainment announced the intended addition of Fly Linq, expected to be the first and only zipline on the Las Vegas Strip. [38] Construction of the $20-million zipline was underway in April 2018. [39] [40] The Fly LINQ attraction features 10 side-by-side zip lines. [41] Fly Linq opened at The Linq Promenade on November 9, 2018. [42]

O'Sheas Casino reopened in December 2013, attached to the Linq's casino floor and to its shopping promenade. [43] [44] 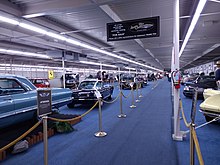 The Auto Collections was a collection of classic vehicles on display at the resort until 2017. [45] The museum opened on December 1, 1981, [3] [46] known then as the Antique and Classic Auto Collections. [13] [47] The museum initially consisted of Engelstad's own private car collection, [45] worth over $10 million at the time of the opening. [46] The exhibition was located in an air-conditioned facility on the 5th floor of the resort's parking garage. [48] [49]

Don Williams and Richie Clyne took over operations of the museum in 1999. [50] Under their management, the museum began offering its vehicles for sale and trade on February 1, 2000. [51] Approximately 200 vehicles were kept in storage nearby. Vehicles would be taken out of storage to take the place of those that had been sold in the exhibit. Approximately half of the vehicles in the collection were owned by Williams and Clyne. [52] The Auto Collections closed on December 30, 2017. [45] [53] Rob Williams, the general manager and a part-owner, said about the closure, "It's time; it's basically that simple. We've had a great run here … It's just time to close it down and move on to our next endeavors." Although visitor attendance had slightly declined, it was not a reason for the closure. [45]

The exhibit was located in 125,000 sq ft (11,600 m2) of space. The collection was the world's largest classic car showroom, with more than $25 million worth of inventory on display and for sale. More than 250 antique, classic, muscle and historically significant cars were on display and nearly all were for sale. Prices varied dramatically depending on many factors and ranged from as low as $30,000 to several million dollars for the especially rare pieces in the collection. Some of the cars presented included those once driven by famous celebrities or utilized by state officials, such as the 1955 Lincoln Capri Convertible owned by Marilyn Monroe, the 1939 Chrysler Royal Sedan formerly belonging to Johnny Carson or the 1962 Lincoln Continental Towne Limousine serving President John F. Kennedy.

Frank Marino's Divas Las Vegas was a drag revue starring Las Vegas' longest-running headliner, Frank Marino, [55] who hosted the revue as his most famous impersonation, Joan Rivers. [56] The show moved to the Imperial Palace from the Riviera Hotel and Casino in 2010, and ran for eight years, until it was shut down in July 2018 due to controversy involving a charity scandal. [57]

Beginning in 2003, [58] the casino had approximately eight blackjack tables on the lower level that featured celebrity impersonators as dealers. These impersonators, which included Joliet Jake from the Blues Brothers, Elvis Presley, Michael Jackson, Cher, Shakira, Roy Orbison, Zac Brown, Shania Twain, Britney Spears, Buddy Holly, and others, alternated dealing cards and performing a song on a small stage in the center of the tables. The Dealertainers pit was discontinued as of September 8, 2014. [58]