Las Vegas station was a passenger railroad station in Las Vegas, Nevada. It is connected to the rear of the Plaza Hotel & Casino and was in service from 1971 until the demise of the Desert Wind in 1997. [1] 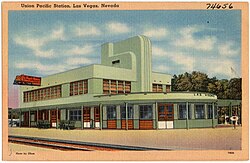 Prior to the construction of the casino, part of the site was used for a Streamline Moderne train station. [2] Constructed in 1940, the station was upgraded with neon lights in 1946. [3]

The station served several Union Pacific trains a day, due for Los Angeles to the west and Salt Lake City, then Chicago and St. Louis to the east. In 1954 early morning departures, the City of Los Angeles and the City of St. Louis headed to Los Angeles headed from the station, and afternoon and evening trains, the Challenger and the Gold Coast-Pony Express departed for Los Angeles. [4] All of these trains, save for the Gold Coast, lasted until Amtrak assumed responsibility for the Union Pacific's passenger operations in May 1971.

This station was demolished in 1971 and replaced by the Union Plaza Hotel, which included a small waiting room to be used as a station for Amtrak trains.

Passenger service returned briefly in 1976 with Amtrak's Las Vegas Limited and in 1979 with the Desert Wind.

Before the discontinuation of the Desert Wind train route on May 10, 1997, Amtrak's Las Vegas station was located at the Plaza. The station and ticket windows were directly connected to the hotel. It was the only train station in the U.S. located in a casino.

In 2005 DesertXpress Enterprises LLC was formed in an attempt to restore passenger rail service to Las Vegas, though their Las Vegas terminal is planned to be a newly-constructed station. [5]