From Wikipedia, the free encyclopedia
Casino located on the Las Vegas Strip in Paradise, Nevada 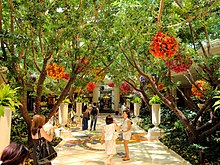 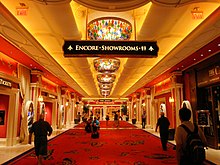 Wynn Las Vegas, often simply referred to as Wynn, is a luxury resort and casino located on the Las Vegas Strip in Paradise, Nevada, United States, on the site of the old Desert Inn Hotel. The US$2.7-billion resort is named after casino developer Steve Wynn and is the flagship property of Wynn Resorts. The resort covers 215 acres (87 ha). It is located at the northeast corner of Las Vegas Boulevard and Sands Avenue, directly across The Strip from the Fashion Show Mall.

The Wynn Plaza shopping complex, a large expansion of the Wynn Las Vegas and Encore Las Vegas, opened November 9, 2018. [3] The shopping complex moves the Wynn properties closer to Las Vegas Boulevard. Tenants include upscale stores such as Balmain, Celine, Kiton, Stella McCartney and restaurants including Urth Caffé and Cipriani. Wynn Paradise Park was planned to be built on the site of a golf course adjacent to Wynn Las Vegas and Encore Las Vegas. The 20-acre lagoon, boardwalk, waterfront meeting space, and other features was expected to draw additional traffic to the hotels. The project was abandoned in November 2018. [4] Instead, Wynn Las Vegas revamped its 18-hole championship golf course, which reopened in October 2019. [5]

Steve Wynn first revealed plans of a 45-story, 2,455-room, and 514-foot resort and four-acre lake in August 2001. The project did not have a formal name and would be built on the site of the Desert Inn. The project's name was revealed on October 19, 2001, as "Le Rêve", meaning "the dream" in French.

To make way for the resort, the Desert Inn's main tower was imploded on October 23, 2001. The rest of the Desert Inn was imploded on November 17, 2004. The project included the redesigning of the historic Desert Inn golf course, which was renamed the Wynn Golf Club. The remainder of the property was acquired by purchasing private residences that were generally located along Paradise Avenue. While some owners sold early on, others held out. This resulted in numerous legal actions between the various parties. In the end, the site acquired totaled 215 acres (87 ha).

In June 2002, Steve Wynn filed for an IPO to help fund the project. Wynn hired Marnell Corrao Associates to design and build the resort. The resort was built at a cost of $2.7 billion, which made it the largest privately funded construction project in the nation. The name of the resort was changed from "Le Rêve" to "Wynn Las Vegas" on June 23, 2003.

Wynn Las Vegas opened on April 28, 2005, the same day as Steve Wynn's wife, Elaine Wynn's birthday, the 55th anniversary of the original Desert Inn opening, and five years from the day Wynn purchased the Desert Inn site. Early advertising for the resort featured exterior images of the hotel tower, with Wynn standing on the roof, just above his signature logo. The initial commercial aired in local markets during the 2005 Super Bowl, eventually being nationally broadcast as opening drew near. A "teaser" website for the resort included both the commercial and a "making-of" video.

The hotel runs a quarterly magazine, called "WYNN", and is available in all guest rooms at both Wynn and Encore, as well as online.

Wynn dealers are represented by the Transportation Workers Union. [12]

Since Wynn's completion, the resort and other hotels on the Strip has been shown in many films and television shows based on Las Vegas.

The resort is notably featured in the 2009 film 2012, where the film's main characters flee a destroyed Las Vegas by narrowly flying a plane similar to the Antonov An-225 between the crumbling Wynn and Encore towers as they collapse onto one another.

In addition, the Encore Theater was home to Beyoncé's sold-out I Am... Tour, which was featured in I Am... Yours: An Intimate Performance at Wynn Las Vegas, filmed from July 30 to August 2, 2009.

An action comedy film Paul Blart: Mall Cop 2 starring Kevin James was entirely filmed at the casino. It is the first film ever shot on the property of Steve Wynn by his permission. [13] Other films shot at Wynn include Frank & Lola, The Squeeze, Sinatra 100: An All-Star Grammy Concert, Garth Brooks’ Holiday Special, and The House. [14] 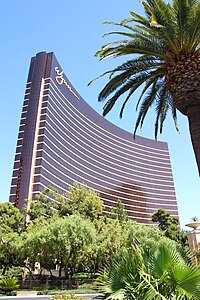 The Wynn as seen from the Las Vegas strip

In contrast to previous hotels built by Wynn, including Bellagio, The Mirage, and Treasure Island, the Encore Esplanade Fountain is a relatively subdued Las Vegas Strip attraction to draw in passers-by. At its opening, the Wynn was the tallest hotel building on the strip (a record which lasted two years). It was the first Vegas casino to feature a car dealership ( Ferrari- Maserati). [15] Other firsts:

In a departure from the trend established by The Mirage, which opened sidewalk attractions to draw in customers, Wynn Las Vegas is constructed so that visitors enter the building to view the attractions. The main attraction is a large, curtain waterfall behind a mountain that faces the strip. The waterfall falls into a 3 acres (1.2 ha) lake.

The first production show to open was Le Rêve. Le Rêve is set in a 1 million gallon water-oriented theater where no seat is more than 40 ft (12 m) from the stage. The production was created by Franco Dragone.

Le Rêve was the working name of the resort before it was changed to Wynn Las Vegas. "Le Rêve" means "The Dream" in French, and the name of the centerpiece painting that Steve Wynn owned, Le Rêve by Picasso.

Avenue Q, a Tony Award-winning puppet and people musical which enjoyed considerable success on Broadway, was the second production show to open at Wynn. It debuted on September 8, 2005, in the 1,200-seat Broadway Theatre and closed on May 28, 2006.

Spamalot, a Tony Award-winning comedic musical based on Monty Python and the Holy Grail, opened for previews on March 8, 2007, at Grail Theater (formerly Broadway Theatre). The official run began on March 31, 2007, and starred John O'Hurley as King Arthur through September 26, 2007. The show closed on July 13, 2008.

On April 17, 2008, Wynn Resorts announced that Mirage headliner Danny Gans would move to the resort in February 2009. [18] Gans moved into the theater formerly used by both Avenue Q and Spamalot, which was renamed Encore Theater and is marketed as part of the Encore expansion. Gans performed there until his death on May 1, 2009.

The Wynn Golf Course was the only golf course on the Las Vegas Strip, built on the site of the former Desert Inn course. It was designed by Steve Wynn and Tom Fazio, who previously worked together on the Shadow Creek Golf Club, in an exclusive neighborhood in nearby North Las Vegas. [21] It closed in December 2017 to make way for a new development on the land into the resort's proposed $1.5 billion Paradise Park. [22] The course was re-opened in October 2019.

The Tower Suites at Wynn Las Vegas consists of all suites in the separated southernmost section of the main tower. These 296 rooms, all suites have a private driveway with Rolls-Royce house cars and chauffeurs, as well as a private entrance with koi pond, a separate check-in area and elevators, and a private pool area. The hotel has since become popular among celebrities and the very wealthy. In 2006, The Tower Suites at Wynn Las Vegas was evaluated independently from the rest of the property by Mobil Travel Guide for their 2007 ratings. It was awarded the first ever Mobil Five-Star rating awarded to a hotel in Las Vegas and has since received numerous other five-star awards, making the Tower Suites one of the finest boutique hotels worldwide. [23]

On April 28, 2006, Wynn celebrated its first anniversary by beginning construction of a second hotel tower. [24] Called Encore, the tower was a $2.3 billion, 2,034-room hotel project adjacent to the existing resort and on the remaining frontage of Las Vegas Boulevard. Encore opened on December 22, 2008.

In early 2018, it was announced by the then-chairman of Wynn Resorts Steve Wynn that the company plans to purchase the property located across the street from where Wynn Las Vegas and Encore is located where the New Frontier Hotel and Casino used to be located before its demolition in 2007. [25] The new hotel, called Wynn West, is planned to be a 2,000-3,000 room hotel. It will connect to the currently existing Beach Club outside Encore and Wynn Las Vegas by an "air conditioned umbilical hallway" that will travel across Las Vegas Boulevard. The chairman said that he is "going to get those... buildings up as fast as I can because I want to capture more of the absolutely inevitable visitor and tourist traffic that Las Vegas will experience in the next 15 to 20 years" when asked about his projects. The newly appointed CEO of Wynn Resorts Matt Maddox plans to move forward with the plans to build Wynn West. [26] He said that development of Wynn West is "still in the top of the first inning". He is confident that the Wynn design team will flourish, even without Steve Wynn, who resigned from his position after being accused of sexually harassing employees. The team has architects Roger Thomas and DeRuyter Butler, who were a part of the teams that developed The Mirage, Treasure Island Hotel and Casino, The Bellagio, and Wynn Las Vegas.