Paradise Palms began in 1960 by Paradise Development spearheaded by founders Irwin Molasky and Merv Adelson. Groundbreaking was held March 21, 1960, with Molasky, Adelson, Clark County Commissioner Harley Harmon and financier Nathan Adelson present. Paradise Palms helped open up the Paradise Valley to development, bringing sewer, water, power and telephone down Maryland Parkway and Desert Inn Road. Touted as an $8 million project, Paradise Palms was originally slated for 300 homes, later expanded to 1,000 residences on 720 acres. Homes were visioned by Molasky to be “designed for the better life, placing a newer and higher standard of living within the reach of the vast majority.” Master planning was done by TME Engineering Services Corporation of Los Angeles, CA who had gained fame planning the communities of Lakewood and Palos Verdes Estates. Curved streets were laid out ending in cul-de-sacs with the intent to “add to the privacy and quiet of every home.” Paradise Palms would go on to win the American Builder magazine award for one of the best planned communities in the U.S.

The original models were located off Cayuga Parkway, and made their debut on July 3, 1960, with 77 homes built between 1960 and 1961. Designed by local architect Hugh Taylor, each home was touted to be of "contemporary design for modern desert living.” Starting at $25,000, 3 and 4 bedroom plans were designed with a central hall plan that allowed access to any room without passing through another. Taylor designed each home with a variety of roof lines (shed, flat, gable) and elevations featuring unique decorative block work. Other sides of the Taylor-designed home were finished in a Masonite siding with a light basketweave finish. The interior designs were by world-renowned designer C. Tony Pereira, who took care to ensure that color would be an integral part of the community. Other features of the homes included a fully landscape yard complete with palm tree, optional swimming pools, wall-to-wall wool carpeting, vinyl asbestos kitchen flooring, natural wood cabinetry, fireplaces and large sliding glass doors overlooking the terrace and pool areas.

In 1961, Paradise Development hired the young architectural firm of Palmer & Krisel fresh from their success building hundreds of successful tract homes for Alexander Homes and other custom projects in Palm Springs, California. Local legend has it that Molasky was acquaintances with Bob Alexander, and after visiting Racquet Club Road Estates in Palm Springs, borrowed a sales brochure that served as inspiration for the Taylor-designed plans. The Paradise Palms Model 1 was actually derived from the Palmer & Krisel Racquet Club Road Estates plans, while the Model 2, 3 and 4 were derived from other Palmer & Krisel-designed neighborhoods found throughout southern California, Arizona and Texas.

On November 3, 1961 the Plan-O-Ramic model home center opened on Dakota Way featuring all Palmer & Krisel-designed homes built by Paradise Homes. Each of the original 9 different model homes were displayed, while a folded plate roofed sales pavilion with playground and lookout tower dubbed “Inspiration Point” sat at the end of Dakota Way, accessed from Desert Inn Road. The pavilion was later removed and replaced by a custom home in 1968. Each of the eight original models used a clever numeric nomenclature system that was derived from the home square footages. Model 1s measure 1150 square feet, Model 2s were 1250 square feet, Model 3s were 1300 square feet and so on. With the exception of the Plan-O-Ramic model home center, all Model 1, 2 and 3s are located north of Desert Inn Road, while Models 5, 6, 7 and 8 (and later 11, 12 and 14) were located south of Desert Inn Road. Interior design was also provided by C. Tony Pereira, and models were furnished in both contemporary and provincial styles. At the time of closeout, each model was sold fully furnished.

In 1963 other Palmer & Krisel-designed homes were added to the mix, including the model 11, 12 and 14. These homes were slightly larger and started at a higher price point than others in the community. 1963 was also the advent of the ‘Hawaiian’ elevation on Palmer & Krisel homes. The Hawaiian elevation was designated with an ‘H’ after model numbers, and came with lava rock accents, horizonal siding, pyramidal or hipped roofs with shake shingles, and exaggerated crossed beams designed to emulate outriggers oars. Models 4-8, 11, 12 and 14 were offered in Hawaiian elevations, with the Model 12 proving to be the most popular. Both the Hugh Taylor and Palmer & Krisel-designed homes were built by Molasky and Adelson’s company Paradise Homes. Roughly 400 Palmer & Krisel built homes are found in Paradise Palms. Several Palmer & Krisel homes along Eastern Avenue have been demolished for commercial development, while others along both Eastern Avenue and Desert Inn Road have been converted to commercial uses. Other builders were added to Paradise Palms in 1963, including California-based Americana Homes, Tropical Estates by Vallee Development, Stellar Greens by D.L Bradley, Miranti Homes and in 1964 Fontainebleau Estates by Eastern Enterprises.

Americana Homes offered traditional mid-century styled homes, a dramatic contrast to Paradise Homes’ offerings. They are characterized by their larger floor plans with 3 to 5 bedrooms each. Five plans were offered, with three traditional elevations each utilizing stone or long, horizontal brick accents. Americana was the first builder to employ the use of two-car garages as standard, as only carports were offered by Paradise Homes. Additional features that make Americana Homes unique were walk-in closets, wood paneling in living rooms, wood beamed ceilings in family rooms and the use of heavy shake roofs. Approximately 63 Americana-built homes can be found in Paradise Palms, west of Spencer Street between Twain Avenue and Cherokee Drive and between Tioga Way, Geronimo Way and Cochise Lane.

Tropical Estates by Vallee Development was built by California transplants Lee and ‘Val’ Valente. Built as semi-custom homes, the exteriors of Tropical Estates are defined by low-slung ranch-style architecture, unique breeze block patterns and private courtyards at the front of homes. These homes epitomized early 60s luxury, with skylit interior planters in living rooms and master bathrooms, sunken roman tubs in master baths, formal dining rooms and custom masonry fireplaces. Tropical Estates was built in two phases located adjacent to the western edge of Paradise Palms, south of Pawnee Drive and east of Algonquin Drive and contains roughly 110 homes. Lee and Val also built the ‘Casino House’ on Cochise Lane, complete with a swimming pool in the shape of a ‘V,’ and lived in the home for a few years before selling to Ash Resnik.

Stellar Greens by DL Bradley were semi-custom modern ranch homes offered in 1 and 2-story variants. Nine different plans were offered with 19 different exterior elevations. Bradley homes were luxury offerings with two-car garages, unique stone, board and batten or brick accents, natural gas appliances and fireplaces and large floorplans. Roofs were flat, hipped, gable, or flat/gable combinations with heavy shake shingles, while construction was frame with a medium-sand stucco finish. Interiors of the homes were defined by the use of terrazzo flooring, built-in kitchen appliances (toaster, blender and can openers), large fireplaces, walls of sliding glass doors on the rear of homes, sunken roman tubs in master bathrooms with windows overlooking a small private outdoor garden enclosure, and soffit lighting in living rooms. Stellar Greens is located off Mohigan Way, west of Eastern Avenue and consisted of 47 homes.

Between 1964 and 1965, Eastern Enterprises constructed Fontainebleau Estates north of Desert Inn Road between Pawnee Drive and La Canada Drive. Fontainebleau Estates utilized two different floorplans spread over 115 homesites. Several distinct elevations were offered between the two plans to assure buyers that each home would be distinctive from their neighbors. Each home offered the option of a two-car garage or carport, double-doored entries, brick, stone, board and batten or horizontal lap siding accents, medium-finish sand stucco finishes on side and rear elevations, wood frame construction and varied gable or gable/flat roof combinations. Breeze block accents were used at carports and entries. Interiors featured wood burning fireplaces, walk-in closets, sunken living rooms and built-in clothes hampers. Paradise Palms also provided custom home lots for residents to build the home of their choice on. Custom lots were generally located amongst production home lots fronting the Stardust Country Club, along Spencer Street, Papago Lane, portions of Mohigan Way and on portions of Cherokee Lane and Algonquin Drive. Custom homes were built primarily between the 1960s and 1980s.

Upon opening of the Plan-O-Ramic model home center, a private community park was opened on the south side of Chippewa Drive, between Sioux Way and Nahattan Way. The private park featured a baseball diamond, tennis courts, basketball courts, a playground and a full-time recreation director. A formal home owner’s association oversaw maintenance of the park, but neighborhood legend has it that homeowners grew tired of paying a $3 monthly assessment. In the 1970s the park had become filled with weeds suffering from neglect. The association was disbanded, and in 1978 builder Ray Kanal built 14 Spanish and American-traditional styled homes on the site of the former park.

On February 8, 2017 a portion of Paradise Palms became the first historic neighborhood in unincorporated Clark County. Working with Commissioner Chris Giunchigliani and the Nevada Preservation Foundation, residents made a grass-roots effort to take advantage of the Clark County’s Historic Neighborhood Overlay Ordinance. The Paradise Palms Historic Neighborhood Overlay District was adopted as a zone-change and affects just over 200 homes within the original portion of the community, bounded by Desert Inn Road to the north, Spencer Street/Seneca Drive to the east, Commanche Drive to the south, and Oneida/Nakona to the west. Future expansions are planned with the goal of designating all homes in Paradise Palms as historic. 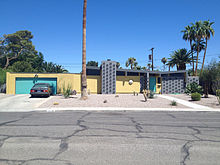 Paradise Palms is located in both the Winchester (north of Desert Inn Road) and Paradise (south of Desert Inn Road) Townships of unincorporated Clark County, NV. Located two miles east of the Strip, Paradise Palms is bounded by Golden Arrow Drive to the north, Eastern Avenue to the East, Viking Road/Twain Avenue to the south, and Algonquin Drive/Nakona Lane/Oneida Drive/La Canada Drive to the west.

Over the years it has hosted LPGA Championship Events and PGA Tournament of Champions. And it was supposedly a Rat Pack hangout back in 'the day.' The golf course was purchased in 2007 by a group led by real estate investor John Knott III. [1] It is currently managed by Harrah's Resorts.

The home used to portray Frank Rosenthal's estate for the movie Casino is at the end of Cochise Street between the #1 and #18 fairways (although his actual home was within the Las Vegas Country Club Estates).

Paradise Palms notable residents (with their addresses) include: [2] 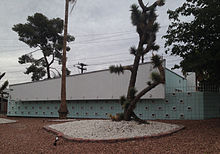