From Wikipedia, the free encyclopedia
District of Las Vegas in Nevada, United States

Symphony Park is a 61-acre site situated in downtown Las Vegas. The downtown area is located just a few miles north of the Las Vegas Strip and centrally within the Las Vegas Valley.

Once housing a Union Pacific rail yard, Symphony Park currently is being master developed for mixed-use by the city of Las Vegas, which is also the landowner. Symphony Park is home to the Cleveland Clinic Lou Ruvo Center for Brain Health, Smith Center for the Performing Arts and the Discovery Children's Museum.

Symphony Park is the only project in the state of Nevada to be accepted into a national pilot program for green neighborhood developments. Symphony Park was awarded gold certification under stage 2 of the U.S. Green Building Council’s Leadership in Energy and Environmental Design for Neighborhood Development. (LEED®-ND)

The Smith Center for the Performing Arts Named in honor of Fred W. and Mary B. Smith and opened in March 2012, this performing arts center offers a blend of performances including dance, music and Broadway shows. It is home to resident companies, Nevada Ballet Theater and the Las Vegas Philharmonic Orchestra, and also houses the Las Vegas Metro Chamber of Commerce. The Smith Center includes a 2,050-seat main hall, a 300-seat Cabaret Jazz club that overlooks a park and the 200-seat Troesh Studio Theatre. The facility has been rated among the top five U.S. venues for overall attendance. (Ranked by Venues Today, a leading international trade publication.)

Cleveland Clinic Lou Ruvo Center for Brain Health The Frank Gehry-designed Center for Brain Health is an institution dedicated to researching and finding cures for Alzheimer's, Huntington's, Parkinson's, Amyotrophic Lateral Sclerosis (ALS) and other forms of memory disorders. Its clinic, which opened during the summer of 2009, provides assistance for both patients and caregivers. The facility also houses the Keep Memory Alive Event Center, which made its debut in May 2010, where a variety of programs are held.

DISCOVERY Children's Museum Symphony Park has been home to the DISCOVERY Children’s Museum at the Donald W. Reynolds Discovery Center since March 2013, when it relocated from a smaller facility in another downtown location. The center focuses on science and nature, art and culture and early childhood development with 26,000 square feet of interactive, hands-on exhibits. The 3-story museum is complete with nine interactive galleries featuring traveling exhibitions, daily programs, demonstrations and cultural programming. 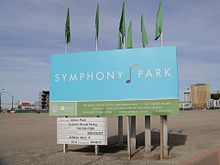 October 4, 2000 City Council holds the agreement that allows the City to exchange 99 acres in the Las Vegas Technology Park plus $2 million for the 61.5 acres.

October 18, 2000 City Council approves the agreement between PAMI and the City of Las Vegas for the acquisition of the 61.5-acre parcel located at Grand Central Parkway and Bonneville.

January 2005 Mayor announces gift of land on site to Ruvo for Alzheimer's Clinic ($1.4 million or 2 acres).

August 2007 Only project in Nevada accepted into Leadership in Energy and Environmental Design for Neighborhood Development (LEED®-ND) pilot program developed by the U.S. Green Building Council.

November 2007 City Council approves a $1.71 million agreement with the Whiting-Turner Contracting Company to handle pre-construction services for The Smith Center For The Performing Arts.

March 2012 The Smith Center for the Performing Arts debuts.

Prior to the construction and opening of T-Mobile Arena, Las Vegas officials envisioned a $400 million arena with about 20,000 seats, large enough to house an NBA team, with additional retail throughout. It would have gone on the northeastern edge of Symphony Park, close to the Smith Center for the Performing Arts. [1] The project was envisioned to be a private/public partnership between the city of Las Vegas and the Cordish Cos. [2]

The project later morphed into a soccer stadium to attempt to attract a Major League Soccer franchise. [3]