Allegiant Stadium [10] is a domed stadium located in Paradise, Nevada, United States. It serves as the home stadium for the National Football League (NFL)'s Las Vegas Raiders and the University of Nevada, Las Vegas (UNLV) Rebels college football team. It is located on about 62 acres (25 ha) of land west of Mandalay Bay at Russell Road and Hacienda Avenue and between Polaris Avenue and Dean Martin Drive, just west of Interstate 15. Construction of the $1.8 billion stadium began on November 13, 2017, and its temporary certificate of occupancy was issued on July 24, 2020, with a full certificate of occupancy anticipated around August 1. The State of Nevada, however, would not have allowed events with fans in August, due to the COVID-19 pandemic. [11] [12] Raiders officials have noted this will be a "substantial completion" date meaning not every element of the stadium will be finished, but enough will be done to host football games, concerts and other events. [13]

The first event at the new stadium is scheduled to be a Monday Night Football game between the Raiders and the New Orleans Saints on September 21, 2020.

In January 2016, reports emerged that Las Vegas Sands was considering developing a stadium in conjunction with Majestic Realty and UNLV, on a 42-acre (17 ha) site on Tropicana Avenue owned by UNLV. [14] UNLV had been in the market for a new stadium to replace Sam Boyd Stadium since at least 2011. [15] Raiders owner Mark Davis visited Las Vegas on January 29 to tour the site and meet with Sands chairman Sheldon Adelson and other local figures. [16] The Raiders, who had been trying to get a new stadium built for the team since the 1980s, had just missed out on relocating to Los Angeles that same month with the Rams and Chargers moving into a new stadium in Inglewood, California and were at an impasse in Oakland. In order for the team to relocate to Las Vegas, a new stadium was required, since Sam Boyd Stadium was undersized for the NFL and there were no other professional-caliber stadiums in Nevada.

On March 21, 2016, when asked about Las Vegas, Davis said, "I think the Raiders like the Las Vegas plan," and "it's a very very very intriguing and exciting plan." Davis also met with Nevada Governor Brian Sandoval about the stadium plan. On April 1, 2016, Davis met with UNLV officials and toured Sam Boyd Stadium to evaluate whether it could serve as a temporary home for the team.

In the spring of 2016, the board of directors of Las Vegas Sands rejected Adelson's stadium proposal. Adelson decided to move ahead with the stadium as an individual investment, pledging $650 million of his personal wealth to the project. [20]

The viability of the Tropicana Avenue site was called into serious question in June 2016, when Southwest Airlines objected to the location because its proximity to the northern end of one of McCarran Airport's runways could negatively affect the safety and capacity of air traffic at the airport. [21] The list of potential locations soon expanded to nine candidates, including the sites of the Wild Wild West casino, the Wynn golf course, the Riviera casino, the Las Vegas Festival Grounds, and Cashman Center. [22] By September, the list was narrowed to two possibilities: the Bali Hai Golf Club, south of Mandalay Bay, and a vacant lot on Russell Road, just west of Interstate 15. [23]

On August 25, 2016, the Raiders filed a trademark application for "Las Vegas Raiders" on the same day renderings of a proposed stadium design were released. [24] On September 15, 2016, the Southern Nevada Tourism Infrastructure Committee unanimously voted to recommend and approve $750 million for the Las Vegas stadium plan. [25]

Majestic Realty revealed in October 2016 that it had withdrawn from the stadium project. [26]

In October 2016, Sandoval called a special session of the Nevada Legislature to consider the stadium and other tourism-related proposals. [27] The funding bill for the stadium was approved by a 16–5 vote in the Senate and by 28–13 in the Assembly, and was signed into law by Sandoval on October 17. [28] [29] [30] [31] The bill allowed Clark County to increase its hotel tax to raise the $750 million in funding. [32] 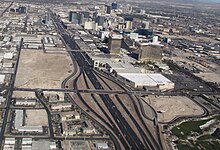 2015 view of the stadium site, adjacent to Mandalay Bay and Interstate 15.

The Raiders filed relocation papers on January 19 to move from Oakland to Las Vegas. [33] On January 26, 2017, the Raiders submitted a proposed lease agreement for the stadium. It was reported that the Raiders had selected the Russell Road site as the stadium location, the team would pay one dollar in rent, and that they could control the naming rights for both the stadium and plaza and in addition keep signage sponsorship revenue. [34]

Days after the Raiders' announced proposal, Adelson dropped out of the stadium project, pulling his proposed $650 million contribution. [35] Shortly after this announcement, Goldman Sachs, which had planned to finance part of the project, withdrew as well. As a result, the Raiders were expected to increase their contribution from $500 million to $1.15 billion. [36]

On March 6, the Raiders revealed Bank of America would lend $650 million to replace the Adelson portion of the funding. [37]

NFL owners voted to approve the move by a margin of 31–1 on March 27. [38] [39] [40] The next day, the Raiders and the Las Vegas Stadium Authority began accepting deposits for season tickets for the new stadium. [41] The Raiders announced that they planned to remain in Oakland until the stadium was complete.

The Raiders closed the purchase of the land for the stadium at the Russell Road site on May 1. The purchase price was reported at $77.5 million. [42] On May 11, it was announced that in a joint venture Mortenson Construction and McCarthy Construction would be the developers for the stadium. Mortenson previously worked on U.S. Bank Stadium in Minneapolis. The stadium authority approved a stadium lease with the Raiders on May 18. [43] The lease was to be for 30 years with four successive extension options of five years each. [44]

On September 18, construction activity began on the stadium site with site preparation. [45] A groundbreaking ceremony was held on November 13. [46] [47] The ceremony featured NFL Commissioner Roger Goodell, Raiders owner Mark Davis, his mother Carol Davis, various Raiders legends including Howie Long, Jim Plunkett, Tom Flores and Ray Guy, Las Vegas and Nevada politicians such as Governor Brian Sandoval, Las Vegas Mayor Carolyn Goodman, Clark County Commissioner Steve Sisolak and stadium authority head Steve Hill. The event was hosted by George Lopez and included other celebrities like Carlos Santana, longtime Vegas icon Wayne Newton and Howie Dorough and Nick Carter of the Backstreet Boys. It also featured a tribute to the victims of the nearby 2017 Las Vegas shooting, including a performance by Judith Hill and the Las Vegas House of Blues Gospel Choir performing ‘Rise up’ and the lighting of 58 beams of light, symbolizing the 58 victims killed in the attack. [48]

In January, construction crews began blasting caliche rock with dynamite to excavate and create the stadium bowl. [49] On February 3, the Raiders opened a 7,500-square-foot (700 m2) stadium preview center at Town Square, located a few miles from the stadium site, featuring interactive exhibits and team memorabilia, with plans for simulations of views from individual seats and a large-scale stadium model. [50]

On August 27, Clark County gave the stadium a new address, rechristening it from its original 5617 Dean Martin Drive address to 3333 Al Davis Way. [51]

It was announced on May 24, 2019, that 20 additional suites would be added to the stadium in the south end zone, with six suites on the main concourse and 14 suites in the lower suite level, one section above the main concourse. The suites were added in an effort to make the stadium more attractive for a Super Bowl. [52]

Clark County officials declared that the stadium met its substantial completion date on July 31, 2020, meaning it could issue a certificate of occupancy and officially begin leasing the venue to the Las Vegas Raiders. Work would still continue, with the project closeout scheduled for October 2020. [53]

The budget for development of the stadium is estimated at $1.8 billion. Of this, $78 million was spent to purchase the land, $1.33 billion is estimated to be spent on construction, $123 million on furniture, fixtures, and equipment, $234 million on design and engineering, and $31 million on utilities and infrastructure. [54] [55] Some reports gave a budget of $1.9 billion, which also included $100 million to build a separate Raiders practice facility. [56]

The financing for the project is expected to come in the form of $750 million in public funding and $1.1 billion from the Raiders. [57] The public portion of the funding will come from municipal bonds issued by Clark County, backed by the proceeds of a special tax on hotel rooms in the Las Vegas area, which took effect in March 2017. [58] The Raiders' contribution was expected to include a $650 million loan from Bank of America, $200 million from the NFL's stadium loan program, and $300 million from sales of personal seat licenses at the stadium, naming rights for the stadium, and sponsorships. [59]

Local government cannot receive any rent or revenue sharing from the stadium, because such an arrangement would not be compatible with the tax-exempt status of the bonds. [60] Proponents instead argued that the public financing would be justified by increased economic activity and tax revenue related to the stadium. [61] Critics have argued that the economic projections were based on overly optimistic assumptions. [62] [63]

A total of $645 million in construction bonds sold out in 90 minutes in April 2018, representing Clark County's contribution to the project beyond room taxes already collected. [64]

For Allegiant Stadium, Mark Davis retained the same architecture firm, MANICA Architecture, that had designed the previously proposed Carson Stadium near Los Angeles. [65] [66] Davis retained much of the look from the Carson stadium because he "fell in love with the overall design of it". [67] The stadium is a 10 level domed stadium with a transparent ETFE roof, silver and black exterior with light up strips installed by YESCO and large retractable curtain-like side windows facing the Las Vegas Strip. [68] The north endzone area in front of the retractable windows contains a large torch that houses a flame in honor of Al Davis, the late long-time owner of the Raiders. [69] The torch is 85 feet (26 m) tall and is currently the largest 3D printed object in the world. [70]

The stadium has a roll-in natural grass field similar to the one at State Farm Stadium in Glendale, Arizona. [71] While the Raiders play on the grass field, UNLV prefers to play on an artificial turf surface. The artificial turf is placed directly on the stadium's concrete floor, and the tray holding the grass field is designed so that it can roll in and out without disrupting the turf underneath it. [72]

The stadium replaces Sam Boyd Stadium and serves as the home of both the Raiders and the UNLV Rebels football program. The first UNLV football game at the stadium was scheduled against the California Golden Bears for Saturday, August 29, 2020; [73] however, that game was canceled when the Pac-12 Conference, home to California, announced that its teams would only play conference games in the 2020 season due to the COVID-19 pandemic. [74] A September 12 home game against Arizona State has also been canceled for the same reason. As of July 25, 2020 [update], UNLV's October 10 home game against Mountain West Conference rival Wyoming has not been canceled. The Rebels' non-conference home game on September 5 against the Louisiana Tech Bulldogs is also still on the schedule, but that contest will take place at Sam Boyd Stadium.

The stadium will host the annual Las Vegas Bowl which moves from Sam Boyd Stadium and features the Pac-12 against a team from the Big Ten Conference or Southeastern Conference. [77] [78]

David Beckham visited Las Vegas in 2016 to advocate for the stadium as a possible home for his Major League Soccer expansion team, [84] although he ultimately announced the launch of the team with a stadium in Miami. [85] In 2019, it was revealed that Vegas Golden Knights owner Bill Foley was engaged in discussions with MLS to land a team to play in the stadium. [86]

The stadium was submitted as a potential site for the 2026 FIFA World Cup, but was later withdrawn from consideration. [87] [88]

On August 5, 2019, the Raiders announced the team had reached an agreement with Summerlin-based Allegiant Air's owner, Allegiant Travel Co., for the naming rights for the first 30 years of the stadium's use beginning in 2020. [10]