From Wikipedia, the free encyclopedia
Hall of fame in Las Vegas, Nevada

The Burlesque Hall of Fame (BHOF) is the world's only museum dedicated to the history, preservation, and future of the art of burlesque. Located in the Las Vegas Arts district at 1027 S Main st. #110, BHOF is a tourist destination and non-profit 501 (c)(3) educational organization offering tours of its vast Collection of costumes, memorabilia, props and ephemera from burlesque's heyday through contemporary practice; classes for individuals and groups at all levels including beginner; movie screenings; research access for students and journalists; and a gift shop.

Formerly known as Exotic World, the museum began as the personal collection of striptease artist and founding member of The Exotic Dancers' League of America Jennie Lee. After her death in 1990, her friend and fellow entertainer, Dixie Evans, created the museum in Helendale, California, and launched the "Miss Exotic World" Competition in 1990.

In 2006, The Burlesque Hall of Fame relocated from Helendale to Las Vegas, NV, to establish itself as a permanent tourist attraction and exhibition space for its collection. After nearly a decade in the Emergency Arts building in the heart of a revitalized Downtown Las Vegas, the museum moved to Las Vegas' Arts district in 2018.

This Miss Exotic World competition is in its 29th year (as of 2019), and has grown to become The Burlesque Hall of Fame Weekender, a four-day convention held annually in Las Vegas that includes class, vending, museum tours, pin-up safaris, and four nights of showcases: Movers, Shakers, and Innovators; The Titans of Tease Reunion (now in its 68th year); The Miss Exotic World Competition; and Icons and All-Stars.

Retired dancer Jennie Lee started collecting burlesque memorabilia when she owned the Sassy Lassy nightclub in San Pedro, California. After Lee was diagnosed with breast cancer, she and her husband moved to an abandoned goat farm in Helendale, California, located in the Mojave Desert about one third of the way between Los Angeles, California and Las Vegas, Nevada.

Lee intended to create a burlesque museum, found a burlesque school and run a bed and breakfast, and the goat farm site had enough room to contain her growing collection. Only the museum got started within her lifetime.

After Lee died in 1990, Dixie Evans took over the farm and turned it into The Exotic World Burlesque Museum, aided by Lee's widower, Charlie Arroyo. Lee's memorabilia formed the core of the collection, but people from around the world soon started to donate items to Exotic World. The collection grew large enough to fill the entire farm.

In late 2005, the museum was temporarily closed for inventory and renovations in the wake of Arroyo's unexpected death and significant weather damage to the museum facilities. Although the museum was not open at the time of the annual Miss Exotic World Pageant in 2006, the pageant was nevertheless held at an alternate venue, the Celebrity Theater in Las Vegas. In 2006, the Burlesque Hall of Fame relocated from Helendale to a temporary space in The Las Vegas Emergency Arts building.

The Hall of Fame relocated to a permanent premises in S Main Street, Las Vegas in April 2018. [1]

The Burlesque Hall of Fame does not have a formal induction process. The museum is dedicated to celebrating and honoring the entire history of burlesque. A "Living Legend of the Year" award is presented annually during the BHOF Weekender to a performer who has made a significant contribution to burlesque history. BHOF also presents a "Sassy Lassy" award to a person who has contributed significantly to the promotion and preservation of the art of burlesque.

Living Legend of the Year recipients include:

The museum includes costume elements and props such as feather boas, fans, gloves, garter belts, gowns, shoes, pasties, g-strings, and jewelry. Many of these items are specially made for use in striptease routines. 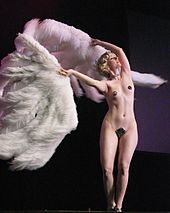 Exotic World hosts the annual Miss Exotic World pageant on the first Saturday of every June. Each year a Neo-burlesque performer is crowned Miss Exotic World in a contest often referred to as the Miss America of burlesque. Winners receive both the title and a trophy.

Evolving from annual celebrations for the Exotic Dancers League union, Dixie Evans initiated the Miss Exotic World pageant in 1990 as a way to draw people to the museum. She garnered attention by sending out a press release claiming that "Lili St. Cyr, Tempest Storm, Blaze Starr and 30 other alumni of burlesque will all be invited to attend this reunion." While technically true, none of those invitees attended that year. However, the release garnered press attention for the pageant, which was successful enough to become an annual event.

Each contest features burlesque performances by both stars from burlesque's golden age and younger women involved in the New Burlesque scene.

First runner Up Second Runner up