Meadows Mall is a shopping mall in Las Vegas, Nevada on 84 acres (34 ha). [2] It is a two-story enclosed mall with 960,000 ft² of space. The mall has 118 stores and 5 anchors. It is surrounded by 4,900 surface parking spaces in four different color-coded lots (Red, Blue, Yellow and Green). Its anchor stores are Curacao, a Dillard's clearance outlet, J. C. Penney, and Macy's.

Dayton-Hudson Corporation (now Target Corporation) began planning the mall in 1973. That year and again in 1974, the Las Vegas City Commission voted against the mall as some members felt that the project should be moved to a better location. In early 1974, Dayton-Hudson won a district court order which required the city to grant a necessary zoning variance. The City Commission appealed the ruling to the Nevada Supreme Court. In 1975, the Supreme Court forced the City Commission to grant the variance. [3]

Groundbreaking took place in May 1976, and construction took more than two years, at a cost of $20 million. Ernest W. Hahn Inc. was the general contractor. More than 1,200 people worked on the mall during construction. The mall was designed by architectural firm Charles Kober & Associates, which chose desert colors and tones for the building. [3]

The mall opened in 1978, at a time when The Boulevard Mall was the city's only other major indoor mall. [4] In September 1978, after the mall's opening, Dayton-Hudson announced that the mall would be sold as part of corporate downsizing. At the time of opening, the mall included 7,600 parking spaces and two anchor stores: Diamond's and The Broadway. Sears and JCPenney stores were scheduled to open in 1979, thus completing the mall. Approximately 3,000 people were expected to ultimately be employed at the mall. [3] The mall's name is derived from the English word for Las Vegas: Meadows.

Dillard's opened at the mall in 1984. [5] In December 1993, the mall was temporarily evacuated after a teenage boy made bomb threats with what ultimately turned out to be a fake bomb. [6] The mall received a renovation in 1995, which included the expansion of its Dillard's store. [7] Later that year, the executive director of the Las Vegas Indian Center criticized the mall's carousel for featuring a carving of an American Indian head on the back of one of the ride's horses, calling it "culturally offensive". [8] On March 1, 1996, a no-smoking policy was instituted inside the mall due to requests from customers. [9] A partial renovation took place in 1997, [2] and included a new overflow parking lot added near the mall's JCPenney store. At the time, the mall was composed of 123 stores, and included one restaurant and a 14-vendor food court. [10] That year, the mall designated parking spaces near its entrances as "Stork Parking," reserved for expectant mothers. [11]

General Growth Properties acquired the mall in May 1998. At that time, the mall contained 951,000 sq ft (88,400 m2). [12] By May 1999, General Growth Properties had increased the mall's occupation to 95 percent. [13] In June 2003, General Growth Properties began a multimillion-dollar renovation that would include brighter indoor lighting, tile flooring, a new color scheme, a new stone facade, exterior paint, and enhanced landscaping, [14] as well as three new escalators and upgrades to the food court. [15] The company felt that the mall, with its dated 24-year-old presentation, needed a contemporary look to compete. The mall remained open during renovations, with most of the work being done during night hours. [2]

With 99 percent of the renovations complete, the mall celebrated its grand reopening on November 21, 2003, with a ribbon-cutting ceremony that morning, followed by live jazz performances and a live children's show featuring Strawberry Shortcake. Several new stores had been added during the renovations, which included new bathrooms and a revamping of the food court. The mall contained 947,370 sq ft (88,014 m2) at the time. [4] [16] In conjunction with Valley Hospital Medical Center and the Summerlin Hospital, the Meadows Mall added the 1,640 sq ft (152 m2) Healthy Living Play Area in November 2004, as a way to educate children about healthy lifestyles. [17] [18]

In December 2004, a man was arrested on eight counts of illegally accessing people's credit card accounts after falsely telling them that he was a millionaire family member of the non-existent Meadows family, whom he claimed were the owners of the mall. [19] Tomfoolery, a 24-hour restaurant and bar with five slot machines, opened on the mall's second floor in April 2005. Tomfoolery was approved for 10 additional slot machines in August 2005, despite opposition from local families. [20] On March 9, 2007, the mall remained open during a police and SWAT search for a suspect who fled into the mall after a traffic stop. [21] 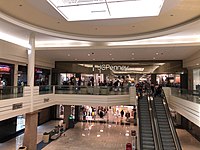 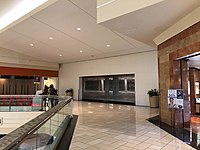 In 2014, Dillard's closed the 100,000 sq ft (9,300 m2) first floor of its 180,000 sq ft (17,000 m2) store in the Meadows Mall, and converted its second floor into a clearance outlet for unsold merchandise from other Dillard's stores. [5] [22] [23] In March 2015, the Las Vegas Review-Journal reported, "With regional shopping centers proliferating, the Meadows is becoming an odd mall out — the shopping center without a distinct personality or demographic segment. As a result, retail experts say, the mall faces a crossroads at which it must soon chart a new direction." [22] In 2015, Sears Holdings spun off 235 of its properties, including the Sears at Meadows, into Seritage Growth Properties. [24]

In August 2018, Round One announced plans to open an arcade and entertainment center inside the mall. [29] Seritage leased part of the Sears first floor to Round One for the new project. [30] Part of the plans would include the demolition of the closed Sears Auto Center. [29] After a year, Round One fast-tracked its plans to get the project opened. [31] [32] The 42,000 sq ft (3,900 m2) entertainment center opened on November 2, 2019. It features food, bowling, billiard tables, karaoke rooms, and more than 250 arcade games, including some imported from Japan. [30] [33] That month, it was announced that Sears would be closing its Meadows Mall location as part of a plan to close 51 stores nationwide. [30] [34] The store closed on February 3, 2020.[ citation needed]