The Watts Towers, Towers of Simon Rodia, or Nuestro Pueblo ("our town" in Spanish) are a collection of 17 interconnected sculptural towers, architectural structures, and individual sculptural features and mosaics within the site of the artist's original residential property in Watts, Los Angeles. The entire site of towers, structures, sculptures, pavement and walls were designed and built solely by Sabato ("Simon") Rodia (1879–1965), an Italian immigrant construction worker and tile mason, over a period of 33 years from 1921 to 1954. The tallest of the towers is 99.5 feet (30.3 m). [5] The work is an example of outsider art (or Art Brut) [6] and Italian-American naïve art. [4] [7]

The Watts Towers are one-half mile (0.8 km) from the 103rd Street/Watts Towers station of the Los Angeles Metro A Line.

Rodia spent 33 years building the towers on a small piece of land he had purchased shortly after moving to Watts in 1917. Before moving to the L.A. suburb, he had lived in Seattle and the San Francisco Bay Area, doing odd jobs. Divorced, estranged from his children, he came to Watts with little money or future. "I was one of the bad men in the United States," he recalled. "I was drunk all the time, always drinking." [8]

He was forty-two, barely literate, unskilled beyond the basic tasks from a life of labor. To this day no one is sure why, but in 1921 he began to build "something big." "You have to be either good good or bad bad to be remembered," he often said. "You gotta do somethin' they never got 'em in the world." [8] He began by digging a foundation, then made the rest up as he went along.

The sculptures' armatures are constructed from steel rebar and Rodia's own concoction of a type of concrete, wrapped with wire mesh. The main supports are embedded with pieces of porcelain, tile, and glass. They are decorated with found objects, including bottles, ceramic tiles, seashells, figurines, mirrors, and much more. Rodia called the Towers "Nuestro Pueblo" ("our town" in Spanish). He built them with no special equipment or predetermined design, working alone with hand tools. Neighborhood children brought pieces of broken pottery to Rodia, and he also used damaged pieces from Malibu Potteries and CALCO ( California Clay Products Company). Green glass includes recognizable soft drink bottles from the 1930s through 1950s, some still bearing the former logos of 7 Up, Squirt, Bubble Up, and Canada Dry; blue glass appears to be from milk of magnesia bottles [9].

Rodia bent much of the Towers' framework from scrap rebar, using nearby railroad tracks as a makeshift vise. Other items came from alongside the Pacific Electric Railway right-of-way between Watts and Wilmington. Rodia often walked the right-of-way all the way to Wilmington in search of material, a distance of nearly 20 miles (32 km).

In the summer of 1954, Rodia suffered a mild stroke. Shortly after the stroke, he fell off a tower. The fall was from a low height but at 75, he sensed the end. In 1955, Rodia quitclaimed his property to a neighbor and left, reportedly tired of battling with the City of Los Angeles for permits, and because he understood the possible consequences of his aging and being alone. He moved to Martinez, California, to be with his sister and never returned.

Artists and newspapers soon touted the amazing towers built by the little man who had disappeared. Then in 1961, Rodia was discovered living in Martinez. In his eighties, with broken teeth and a shock of white hair, he sat unnoticed at an art show in Berkeley where slides of his towers were shown. When the lights went up, Simon Rodia was introduced. He stood to his full 4'10". The audience stood, too, for wave after wave of applause. He bowed and tipped his hat. He died four years later.

Rodia's bungalow inside the enclosure burned down as a result of an accident on the Fourth of July 1956, [10] and the City of Los Angeles condemned the structure and ordered it all to be destroyed. Actor Nicholas King and film editor William Cartwright visited the site in 1959, and purchased the property from Rodia's neighbor for $2,000 in order to preserve it. The City's decision to pursue expediting the demolition was still in force. The towers had already become famous and there was opposition from around the world. King, Cartwright, architects, artists, enthusiasts, academics, and community activists formed the Committee for Simon Rodia's Towers in Watts. The Committee negotiated with the city to allow for an engineering test to establish the safety of the structures and avoid their demolition. [11] [12]

The test took place on October 10, 1959. [13] For the test, steel cable was attached to each tower and a crane was used to exert lateral force, all connected to a 'load-force' meter. The crane was unable to topple or even shift the towers with the forces applied, and the test was concluded when the crane experienced mechanical failure. Bud Goldstone and Edward Farrell were the engineer and architect leading the team. The stress test registered 10,000 lbs. The towers are anchored less than 2 feet (0.61 m) in the ground, and have been highlighted in architectural textbooks, and have changed the way some structures are designed for stability and endurance.

The Committee for Simon Rodia's Towers preserved the site independently until 1975 when, for the purpose of guardianship, they partnered with the City of Los Angeles and then with the State of California in 1978. The Towers are operated by the City of Los Angeles Cultural Affairs Department and curated by the Watts Towers Arts Center/Charles Mingus Youth Arts Center, which grew out of the Youth Arts Classes established in the house structure more than 50 years ago.

In February 2011, the Los Angeles County Museum of Art received a grant from the James Irvine Foundation to scientifically assess and report on the condition of the Watts Towers, to continue to preserve the undisturbed structural integrity and composition of the aging works of art. [14] Weather and moisture caused pieces of tile and glass to become loose on the towers, which are conserved for reattachment in the ongoing restoration work. The structures suffered little from the 1994 Northridge earthquake in the region, with only a few pieces shaken loose. An extensive three-year restoration project by the Los Angeles County Museum of Art began in 2017 and suspends public tours within the site (tours outside of the fenced towers and sculptures are still available). [15] 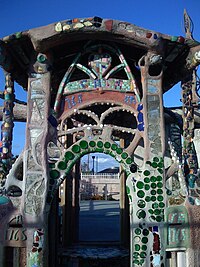 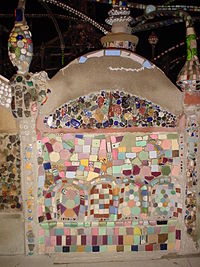 A two-part digital exhibit of the Watts Towers ( Part 1: Rodia's Ship; Part 2: Rodia's Pueblo) was produced in 2016 by Public Art in Public Places for Google Cultural Institute's Google Arts & Culture and focuses on Rodia's intention to create the form of a sailing ship as well as a pueblo or village. The online exhibit utilizes high-definition images and special digital technology for viewing image detail. [6]

Two artist interviews, "Watts Towers Q&A with Dominique Moody" and "Q&A With Artist Alison Saar About Her Connection to Watts Towers," were produced in 2012 by the Los Angeles County Museum of Art as part of its Exhibitions on View series.

In 2019, the towers were a gathering place along the 25.5-mile (41.0 km) funeral procession from the memorial for Nipsey Hussle at the Staples Center that wound through the streets of South L.A. [17] At times, the crowd flooded the street creating gridlock. [18]

Jazz musician Charles Mingus mentioned Rodia's Towers in his 1971 autobiography Beneath the Underdog, writing about his childhood fascination with Rodia and his work. There is also a reference to the work in Don DeLillo's novel Underworld. [19]

In his book White Sands Geoff Dyer writes about his visit to the Watts Towers in the chapter "The Ballad of Jimmy Garrison".

The Watts Towers were highlighted in the 1973 BBC television series The Ascent of Man, written and presented by Jacob Bronowski, in the episode "The Grain in the Stone — tools, and the development of architecture and sculpture". 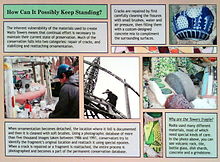 An explanation of how the Watts Towers are maintained

The Watts Towers Arts Center is an adjacent community arts center. The current facility opened in 1970. Prior to that, the Center operated under a canopy next to the Towers. [25] The center was built and staffed by the non-profit Committee for Simon Rodia's Towers in Watts. Changing displays of contemporary artworks are on exhibit, and tours of the Watts Towers are conducted by the center. The Center's Charles Mingus Youth Arts Center holds art classes, primarily for youth and Special Needs adults from the local community and surrounding cities. Partnerships with CalArts and Sony Pictures provide media arts and piano classes. The Day of the Drum and Jazz Festival occurs annually on the last weekend of every September. It includes arts and craft booths and live music.

The only guided tours of the Watts Towers are given by the Watts Towers Arts Center staff and have included access to the interior of the site. Guides explain the history and context of the towers. As of June 2017 general admission is $7.00, seniors $3.00 and children under 12 years of age are free. [26] Tours run Thursday through Saturday 10:30 am to 3:00 pm and Sundays 12:30 pm to 3:00 pm. There are no guided tours on Monday through Wednesday. NOTE: As of 2017, guided tours are no longer available within the site inside the gates for at least three years while substantial restoration is in progress. In the interim, guided tours are given from the exterior of the site only.