Mojave National Preserve is a United States National Preserve located in the Mojave Desert of San Bernardino County, California, USA, between Interstate 15 and Interstate 40. The preserve was established October 31, 1994, with the passage of the California Desert Protection Act by the US Congress. [3] Previously, it was the East Mojave National Scenic Area, under the jurisdiction of the Bureau of Land Management. [4] At 1,542,776 acres (6,243 km2), it is the third largest unit of the National Park System in the contiguous United States.

Natural features include the Kelso Dunes, the Marl Mountains and the Cima Dome, as well as volcanic formations such as Hole-in-the-Wall and the Cinder Cone Lava Beds. The preserve encloses Providence Mountains State Recreation Area and Mitchell Caverns Natural Preserve, which are both managed by the California Department of Parks and Recreation.

Impressive Joshua tree forests are found in parts of the preserve. The forest covering Cima Dome and the adjacent Shadow Valley is the largest and densest in the world. [5] The ghost town of Kelso is found in the preserve, with the defunct railroad depot serving as the Visitor Center. The preserve is commonly traversed by 4 wheel drive vehicles traveling on the historic Mojave Road.

The California Desert Protection Act of 1994 (CDPA) designated a wilderness area within Mojave National Preserve of approximately 695,200 acres (281,300 ha). The National Park Service manages the wilderness in accordance with the Wilderness Act, the CDPA, and other laws that protect cultural and historic sites in the wilderness. [6] 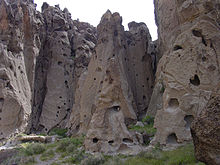 The following climate data is for a higher elevation area in the preserve. See also Climate of the Mojave Desert.