The Humboldt–Toiyabe National Forest (HTNF) is the principal U.S. National Forest in the U.S. state of Nevada, and has a smaller portion in Eastern California. With an area of 6,289,821 acres (25,454.00 km2), it is the largest National Forest of the United States outside Alaska.

Humboldt and Toiyabe National Forests were administratively joined in 1995. Though managed as a single entity, the two forests remain legally and geographically distinct. [4]

HTNF is unlike most other national forests as it contains numerous non-contiguous sections scattered across most of the state of Nevada and a portion of eastern California. Seven ranger districts are located in the many mountain ranges in Nevada, from the Santa Rosa Range in the north to the Spring Mountains near Las Vegas in the south. About 11% of the forest is in eastern California, in the areas around Bridgeport and Markleeville, and other areas east of the Sierra Nevada.

The forest lies in 13 counties in Nevada and six in California. The counties with the largest amount of forest land are Nye, Elko, and White Pine in Nevada, and Mono County in California, but there are 15 other counties with land in this widely dispersed forest. Forest headquarters are located in Sparks, Nevada.

The smaller and more northeasterly Humboldt National Forest is located in eastern and northern Nevada, in parts of Elko, White Pine, Humboldt, Nye, and Lincoln counties. The section is named after Alexander von Humboldt, a nineteenth-century Prussian scientist, [5] and contains about 43.5% of the total area. Local ranger district offices are located in Ely, Elko, Wells, and Winnemucca.

The larger and more southwesterly Toiyabe National Forest is located in central, western, and southern Nevada and eastern California, in parts of Nye, Lander, Mineral, Lyon, Eureka, Washoe, Douglas, and Clark counties, and Carson City in Nevada, as well as Mono, Alpine, Sierra, Nevada, Lassen, and El Dorado counties in California. The section contains about 56.5% of the total area. Local ranger district offices are located in Austin, Bridgeport, Carson City, Las Vegas, and Tonopah. Bridgeport is the only station that is in California. 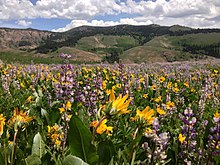 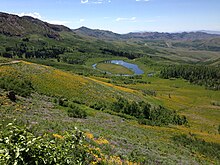 Copper Basin in the Jarbidge Wilderness

Lamoille Lake in the Ruby Mountains

Lake Tahoe's eastern shoreline is within the Carson ranger district

In descending order of forest land area within the counties: [7]