From Wikipedia, the free encyclopedia
Not to be confused with Big Basin State Park.

Great Basin National Park is an American national park located in White Pine County in east-central Nevada, near the Utah border, established in 1986. The park is most commonly entered by way of Nevada State Route 488, which is connected to U.S. Routes 6 and 50 by Nevada State Route 487 via the small town of Baker, the closest settlement.

The park derives its name from the Great Basin, the dry and mountainous region between the Sierra Nevada and the Wasatch Mountains. Topographically, this area is known as the Basin and Range Province. [3] The park is located about 290 miles (470 km) north of Las Vegas and protects 77,180 acres (31,230 ha). [1]

The park is notable for its groves of ancient bristlecone pines, the oldest known nonclonal organisms, and for the Lehman Caves at the base of 13,063-foot (3,982 m) Wheeler Peak, as well as Wheeler Peak Glacier. 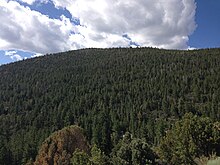 Eleven species of conifer trees and over 800 species of plants are found in Great Basin National Park and the neighboring valleys.

The area around the Visitor Center is dominated by plants such as sagebrush, saltbush, single-leaf pinyon, and Utah juniper. Higher elevations are home to mountain meadows, white fir, quaking aspen, Englemann spruce, and large Ponderosa pine. At treeline is an alpine area of low, delicate plants and rocky outcroppings. [4]

The oldest non clonal organism ever discovered, a Great Basin bristlecone pine tree at least 5,000 years old, grew at the treeline near Wheeler Peak in the national park. It was cut down in 1964 by a graduate student and U.S. Forest Service personnel for research purposes. It was given the nickname Prometheus, after the mythological figure who stole fire from the gods and gave it to man. [5]

Sixty-one species of mammals, [6] 18 species of reptiles, 238 species of birds, two species of amphibians, and eight species of fish are in Great Basin National Park and the neighboring valleys.

In the more rugged areas on the slopes of mountains and in the valley areas nearby, cougars, bobcats, marmots, rock squirrels, and mountain sheep can occasionally be seen throughout this park. Other animals that can be found here include elk, mule deer, spotted skunks, shrews, ringtail cats, and ermine. [7]

The Bonneville cutthroat trout is the only fish native to Great Basin National Park. It arrived in the mountain waters naturally and was eventually isolated by changing climatic conditions. Other trout species, such as Lahontan cutthroat trout, rainbow, brook, and brown trout, were stocked in the lakes and streams of the South Snake Range until the park's incorporation in 1986. [8]

Only two species of amphibians have been positively identified in the southern Snake Range and adjacent portions of Snake and Spring Valleys: the western spadefoot toad (Spea hammondii) and the leopard frog (Rana pipiens). [10] 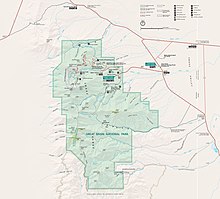 Many of the rocks formed during the Cambrian, when the region lay at the edge of a continental landmass called Laurentia. These rocks include the Cambrian strata. As the Paleozoic era progressed, several intensified geologic events occurred, including repeated episodes of faulting, and in turn, orogenies which involved upward lifting of a metamorphic core complex, creating mafic and rhyolitic dikes and sills.

Extensive volcanism also occurred during the middle to late Cambrian, contributing further to the uplift of the area. This also contributed to a second round of block faulting, in which conglomerates, ash flows, and tuffs accumulated in the Snake Range. [11] [12] 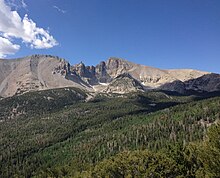 Both continuous and intermittent fault movements also occurred, with individual fault surfaces on both sides of the Snake Range thinning and stretching. [12]

Glaciation, mostly during a series of ice ages in the Pleistocene, heavily eroded the peaks of the Snake Range, leaving canyon walls, U-shaped valleys, cirques, and moraines throughout the range. [12]

The Lehman Cave system began forming around 550 million years ago (during the Cambrian), while it was still submerged in a relatively warm, shallow ocean. The caves are made up of a marble and limestone solution, for the most part, that forms the many cave decorations throughout the caverns. [11]

The cave system became much deeper during the Pleistocene, when a prolonged and increased flow of water eroded through the cave's fracturing bedrock. Eventually, the water level dropped, leaving glare rooms and cavities in the rock, creating the depths of the Lehman Caves system. [11]

The "Cypress Swamp" along the tourist trail in Lehman Cave

The Lehman Caves were originally protected as a national monument in 1922, which was combined with the national park in 1986. [13] [14]

According to the National Park Service, the caves were, most likely, discovered by Absalom Lehman in 1885. [14]

Several living creatures occupy the Lehman Caves. Bacteria are the most common. Crickets, spiders, pseudoscorpions, mites, and springtails may live their full lifecycles in the cave. They are dependent on organic material packed in by other animals or washed in from the surface. [15]

Other animals use the cave, but must leave to forage for food. These include chipmunks, mice, pack rats, and several species of bats. Only insectivorous bats occur in the Great Basin. At least 10 species of bats have been found in the vicinity of Great Basin National Park, including the Townsend's big-eared bat. [16]

The park has 12 trails ranging from 0.3 to 13.1 miles (0.48 to 21.08 km). [18] Trails range from short nature trails at 6,825 feet (2,080 m) (Mountain View Nature Trail), to the Wheeler summit trail starting at 10,160 feet (3,097 m). [18] The Wheeler Summit trail is quite strenuous, and the altitude presents significant hazards for unprepared or inexperienced hikers. Backcountry routes are occasionally maintained throughout the more remote southern portion of the park. A number of these trailheads are accessible by the road that terminates at the primitive Shoshone campground.[ citation needed] 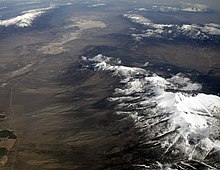 Wheeler Peak and the Snake Range

According to the Köppen climate classification system, Great Basin National Park has a Cold Semi-Arid Climate (BSk). The plant hardiness zone at Lehman Caves Visitor Center is 6b with an average annual extreme minimum temperature of -3.8 °F (-19.9 °C). [23]

The park lies in an arid region and receives very little rainfall during most of the year. Most precipitation is winter snow or summer thunderstorms. All precipitation in this region evaporates, sinks underground, or flows into lakes — i.e., it is endorheic. No water reaches the ocean. [24]

Winters are cool and summers are mild to hot. Weather can change quickly, especially in the back country or on Wheeler Peak at high elevations. [25] Lehman Caves maintain a fairly constant temperature of 50 °F (10 °C) with 90% humidity year round. [26] The climate varies throughout the park, depending on elevation and location. The following data are for the Lehman Caves Visitor Center only. Higher elevations are cooler and receive more precipitation, whereas lower elevations are hotter and drier.