Alpine is a census-designated place in Apache County, Arizona United States, [1] in Bush Valley in the east central part of the state. As of the 2010 census, it had a population of 145. [4]

Alpine was settled in 1876 by Anderson Bush, who built a log house originally known as "Fort Bush". Bush sold his holdings in 1879 to William Maxwell and Fred Hamblin, Mormon settlers who established the town as a Mormon community. [5] The community was named for its lofty elevation. [6] 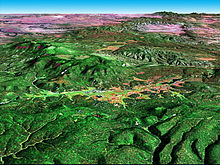 Alpine is located at an elevation of 8,050 feet (2,450 m) above sea level in the eastern end of the White Mountains and surrounded by the Apache-Sitgreaves National Forest. Alpine is a popular destination for hunting, fishing, and camping. Alpine is near the headwaters of the San Francisco River and six miles from the New Mexico border. As of 1960, it was the highest place in the United States where farming was successfully occurring. [5]

Alpine first appeared on the 1920 U.S. Census as the Alpine Precinct of Apache County. [9] It also returned again in 1930. It was recorded as having a White majority for that census. [10] With the combination of all county precincts into 3 districts in 1940, it did not formally appear again until 2010, when it was made a census-designated place (CDP).

Alpine has a warm-summer Mediterranean climate ( Köppen Csb) influence by its very high altitude and the North American Monsoon, which brings frequent thunder showers during the summer. Although temperatures are generally comfortable during the daytime, the sun is very intense and at night frosts have occurred even in summer and are an almost daily occurrence from October to May.

Winters are cold, with storms bringing precipitation mostly in the form of snow. Because Alpine is on the eastern end of the Mogollon Rim, it experiences a rain shadow from the White Mountains: it gets less snowfall than points west at a similar elevation.