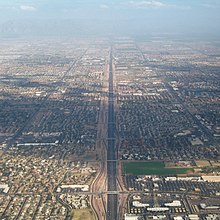 U.S. Route 60 (US 60) is an east–west United States Highway within Arizona. The highway runs for 369 miles (594 km) from a junction with Interstate 10 near Quartzsite to the New Mexico State Line near Springerville. As it crosses the state, US 60 overlaps at various points: I-17, I-10, SR 77, SR 260, US 191, and US 180. Between Wickenburg and Phoenix, the route is known as Grand Avenue (or the Phoenix–Wickenburg Highway). From Tempe to Apache Junction, it is known as the Superstition Freeway.

As US 60 enters the Phoenix metropolitan area, It intersects Loop 303 in Surprise where it becomes Grand Avenue as it continues southeast. It continues to a junction with Loop 101 (Agua Fria Freeway) in Peoria before heading through Glendale. The highway enters the Phoenix city limits and continues towards the southeast until it reaches an interchange with 27th Avenue near Thomas Road. 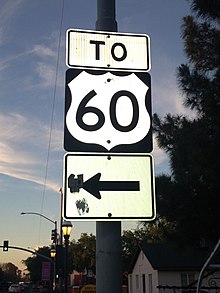 Apache Junction to the state line 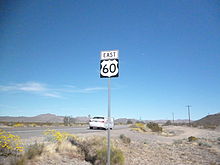 In Show Low, US 60 intersects SR 260 and briefly runs concurrently with SR 260 as it heads northeast through the city. The concurrency with SR 77 also ends in Show Low as SR 77 heads north to Snowflake and US 60 continues towards the east. US 60 leaves the Show Low city limits and heads east to a junction with SR 61 which heads northeast towards Concho. US 60 continues east from this intersection before curving towards the southeast as it heads towards Springerville.

As it enters the Springerville city limits, it intersects and begins to run concurrently with US 180 and US 191. The three highways continue along the same alignment through Springerville, passing over the Little Colorado River. As the three highways continue through the city, they eventually split with US 180 and US 191 heading south towards Alpine and US 60 continuing towards the east. US 60 continues towards the east leaving the Springerville city limits and crossing over the state line into New Mexico. [2] [3]

In 1927, what is now US 60 was signed as or roughly followed by SR 74 between the California border near Ehrenburg and Wickenburg, US 89 from Wickenburg to Florence Junction, US 80 from Phoenix to Florence Junction, US 180 from Florence Junction to Globe and US 70 between Springerville and the New Mexico border. The segment of highway between Springerville and Globe had not been constructed yet. [4] [5] [6] US 60 was extended into Arizona on June 8, 1931, from its original western terminus at US 66 in Springfield, Missouri. [7] While what is now US 60 was under construction between Globe and Springerville, US 60 was temporarily routed down SR 73 as US 60T through San Carlos and McNary. The current route through Show Low was completed sometime between 1935 and 1938. [8] US 60 through Arizona has had far fewer major changes than some other U.S. routes, but one notable example is being replaced by Interstate 10 between Los Angeles, California, and the highway's current terminus near Quartzsite. (The Arizona section of this route was decommissioned in 1982. [9])

US 60 is now the only U.S. Route to serve Phoenix. US 70 (decommissioned 1969), US 80 (decommissioned 1977) & US 89 (decommissioned 1992) have all been truncated outside of Phoenix. The only other major change was being realigned from an "in-town" route along city arterials through Mesa, Tempe, and Phoenix to the old SR 360 alignment a few miles south and merging with I-10 and I-17 into Downtown Phoenix. [10]

In 1949, the Pinto Creek Bridge won an Annual Award of Merit for being the "most beautiful steel bridge", given by the American Institute of Steel Construction. [10]

In 1952, the Claypool Tunnel was bypassed by the Queen Creek Tunnel to the north, upgrading from a simple 'hole in the rock' type tunnel to a more modern tunnel. [10]

In recent years, Arizona Department of Transportation (ADOT) has been working to widen and improve US 60 through the Metropolitan Phoenix Area, as it is one of the area's principal freeways. Along the Superstition Freeway segment in the East Valley between I-10 and Loop 202, ADOT has completed its project of adding additional general purpose lanes (five total plus an HOV lane in each direction), adding auxiliary lanes between exits, improving sound barriers, replacing signs, improving lighting conditions, adding rubberized asphalt to reduce noise, adding variable message signs, installing cameras, and adding traffic sensors. [11] A new partial interchange at Meridian Road, along the Maricopa– Pinal county line, opened in October 2015. [12]

Directional colored shields found on US 60 in Arizona during the 1950s.

Along the Grand Avenue segment in Phoenix, ADOT has been widening portions of Grand Avenue in addition to constructing additional overpasses and underpasses at six former six-way intersections to improve traffic flow along US 60 in the Northwest Valley. [13]

ADOT is currently in the study phase of adding additional lanes between Loop 101 and Loop 303 in the far West Valley.

Due to rapid growth in the far eastern Phoenix suburbs within Pinal County and increasing road congestion in the Gold Canyon area, ADOT has begun to study potential freeway-grade realignments of US 60 past the current eastern terminus of the Superstition Freeway in Apache Junction. The new freeway alignment would bypass the existing at-grade section of US 60 through Gold Canyon, and would either rejoin the existing alignment southeast of town (in the vicinity of the Arizona Renaissance Festival grounds) or at the newly constructed freeway-grade junction with SR 79 at Florence Junction. [14]

An unsigned U.S. Route 60X is also listed by ADOT is divided into two discontinuous segments, both of which are located within Maricopa County in the Phoenix area. Both sections of US 60X were portions of the pre-freeway alignment of US 60 between Apache Junction and central Phoenix. [23]

The eastern segment of US 60X picks up at Sossaman Road, traveling east across Main Street/Apache Trail, crossing Loop 202 and Ellsworth Road before terminating at Meridian Drive, at the Pinal County line. [24] [25]

The eastern segment of US 60X has posted mile markers that likely correspond to the former alignment of US 60.

The entire route is in Phoenix, Maricopa County.

The entire route is in Mesa, Maricopa County.