From Wikipedia, the free encyclopedia
(Redirected from Reno–Sparks metropolitan area) 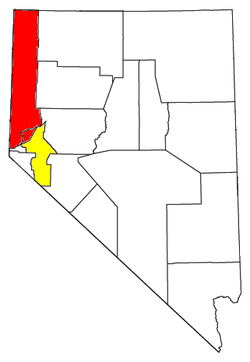 Location of the Reno-Tahoe-Fernley CSA, with the Reno-Sparks Metropolitan Statistical Area highlighted in red

The Reno–Sparks Metropolitan Statistical Area, as defined by the United States Census Bureau, is an area consisting of two counties in Western Nevada, anchored by the cities of Reno and Sparks, part of Greater Reno-Tahoe- Fernley CSA. As of the 2010 census, the MSA had a population of 425,417. [1]

Note: All census-designated places are unincorporated.

The Reno–Tahoe–Fernley Combined Statistical Area (CSA) is made up of four counties and one independent city, Carson City. The statistical area includes two metropolitan areas and two micropolitan areas. As of the 2010 Census, the CSA had a population of 579,668. [4]