U.S. Route 6 (US 6) is a transcontinental highway in the United States, stretching from Bishop, California, in the west to Provincetown, Massachusetts, on the east coast. The Nevada portion crosses the center of the state, serving the cities of Tonopah and Ely, en route to Utah and points further east. Like US 50, to the north, large desolate areas are traversed by the route, with few or no signs of civilization, and the highway crosses several large desert valleys separated by numerous mountain ranges towering over the valley floors, in what is known as the Basin and Range Province of the Great Basin.

US 6 has a diverse route through the state, traversing desert, desert mountain ranges and valleys, ghost towns and Great Basin National Park. The entire highway in Nevada is designated as part of the Grand Army of the Republic Highway, and has also been named the Theodore Roosevelt Highway. [2] Although US 50 to the north is known as The Loneliest Road in America, US 6 can be considered as equally deserving of that title due to it serving equally desolate areas.

The route was routed entirely over existing state highways when it was extended into Nevada in 1937; however, all of the concurrent state routes were eventually removed. The route has remained largely unchanged, except where it was realigned to enter Utah north of Baker instead of passing through the town.

From the California border, US 6 heads northeast through semidesert Queen Valley with Boundary Peak (Nevada), Nevada's highest summit, and Montgomery Peak in California on the right. These twin peaks are the northernmost high summits of the White Mountains, both over 13,000 ft (4,000 m). The highway then climbs into the Pinyon– Juniper zone and crosses Montgomery Pass 7,167 ft (2,185 m).

From the pass, US 6 descends into barren shadscale desert, passing Columbus Salt Marsh on the left, then merging with US 95 from Coaldale to Tonopah. Nevada Test and Training Range begins about 15 mi (24 km) southeast of Tonopah.

Just east of Tonopah, US 6 continues east across a series of desert mountain ranges and valleys, including the Monitor Range. At Warm Springs, State Route 375, also known as the "Extraterrestrial Highway", departs to the southeast and US 6 assumes a northeasterly alignment across the Reveille, Pancake, Grant and White Pine Ranges. Rainfall increases eastward, so valleys become less barren and peaks over 11,500 ft (3,500 m) add scenic interest.

Ely is the largest town on U.S. Route 6 in Nevada. US 50 joins U.S. Route 6 at Ely. East of Ely, U.S. Routes 6 and 50 cross the Schell Creek Range, known for verdant forests and meadows, and for a large deer and elk population. The highway descends to Spring Valley, then crosses the Snake Range at Sacramento Pass, north of Nevada's second-highest mountain, Wheeler Peak, where a branch road accesses Great Basin National Park. Beyond the pass, US 6 passes just north of Baker, a Mormon farming community and reaches the Utah state line. 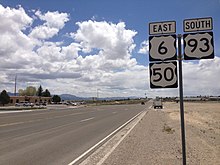 There are no services anywhere between Tonopah and Ely (a distance of about 168 miles). Although US 50 has the nickname "The Loneliest Road in America", US 6 has a solid case for the title; as Tonopah and Ely are the only cities it goes through in the 306 miles (492 km) it traverses in Nevada, with a combined population of just over 6,500, while US 50 boasts Carson City with over 50,000 and even Fallon alone out populates US 6, with over 8,000. In addition, there is not much traffic for US 6, as it ends 38 miles (61 km) south of the California and Nevada state line in the small town of Bishop, California at US 395 (with connections to the former western terminus of US 6 in Long Beach). The most heavily traveled portion of US 6 is the portion that is concurrent with US 95, as the latter route connects Las Vegas and Reno, the two largest metropolitan areas in Nevada.

US 6 was one of the original U.S. highways in the 1925 Bureau of Public Roads plan.[ citation needed] It was commissioned in 1926, but was not extended west into Nevada until 1937. The alignment of US 6 in Nevada has remained largely unchanged since then.