Wind Cave National Park is an American national park located 10 miles (16 km) north of the town of Hot Springs in western South Dakota. Established in 1903 by President Theodore Roosevelt, it was the seventh national park and the first cave to be designated a national park anywhere in the world. The cave is notable for its calcite formations known as boxwork, as well as its frostwork. Approximately 95 percent of the world's discovered boxwork formations are found in Wind Cave. The cave is recognized as the densest cave system in the world, with the greatest passage volume per cubic mile. Wind Cave is one of the longest caves in the world with 149.01 miles (239.81 km) of explored cave passageways, as of 2018 [update]. [3] Above ground, the park includes the largest remaining natural mixed-grass prairie in the United States.

The passages in the park are said to "breathe" as air continually moves into or out of them, equalizing the atmospheric pressure of the cave and the outside air. When the air pressure is higher outside the cave than inside it, air flows into the cave, raising the cave's pressure to match the outside pressure. When the air pressure inside the cave is higher than outside it, air flows out of the cave, lowering the air pressure within the cave. [4] A large cave such as Wind Cave with only a few small openings will "breathe" more obviously than a small cave with many large openings.

Rapid weather changes, accompanied by rapid barometric changes, are a feature of western South Dakota weather. If a fast-moving storm was approaching on the day the Bingham brothers found the cave, the atmospheric pressure would have been dropping fast, causing the cave's higher-pressure air to rush out all available openings, creating the wind for which Wind Cave was named.

The Lakota, Cheyenne, and other Native American tribes who traveled through the area were aware of the cave's existence, as were early Euro-American settlers, but there has been no evidence yet discovered that anyone actually entered it. [5]

The Lakota ( Sioux), an indigenous people who live in the Black Hills region of South Dakota, spoke of a hole that blew air, a place they consider sacred as the site where they first emerged from the underworld where they had lived before the demiurge creation of the world. [5]

The first documented discovery of the cave by white Americans was in 1881, when the brothers Tom and Jesse Bingham heard wind rushing out from a 10-inch (25 cm) by 14-inch (36 cm) hole in the ground. According to the story, when Tom looked into the hole, the "wind" (exiting cave air) blew his hat off of his head. [4]

No valuable mineral deposits were found, and the McDonald family began developing the cave for tourism. Jesse initially hired his son Alvin (age 16 in 1890) and, beginning in 1891, Alvin's brother Elmer, to explore and help develop the cave. [7] Alvin fell in love with the cave and kept a cave diary. [8] Others who worked at Wind Cave and helped explore it between 1890 and 1903 include Katie Stabler, Emma McDonald (Elmer's wife), Inez McDonald (Emma and Elmer's daughter), and Tommy McDonald (brother of Elmer and Alvin). [5]

Tourists explored the cave by candlelight on guided tours. These early tours were physically demanding and sometimes involved crawling through narrow passages.

Like the nearby Jewel Cave National Monument, currently the third longest cave in the world, Herb and Jan Conn played an important role in cave exploration during the 1960s.

A bison scratches against the stone base of a park sign.

The Wind Cave visitor center features three exhibit rooms about the geology of the caves and early cave history, the park's wildlife and natural history, and the work of the Civilian Conservation Corps in the park.

Elk Mountain Campground, located in a ponderosa pine forest, is about 1.25 miles (2.0 km) from the visitor center. The campground has 75 sites for tents and recreational vehicles, and is open year-round with campfire programs offered in the summer and limited services available in the winter. [4] 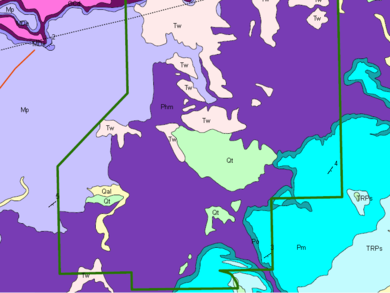 A geologic map of the park:
NPS Wind Cave National Park Geologic Map, where Mp is the Mississippian Pahasapa ( Madison) Limestone, Phm is the Pennsylvanian Minnelusa Formation, Po is the Permian Opeche Shale, Pm is the Minnekahta Limestone, TRPs is the Triassic Spearfish Formation, Tw is the Tertiary White River Group, while Qal and Qt are Quaternary alluvial deposits

The three levels making up the Wind Cave system are located in the upper 76 m of the Mississippian Pahasapa (Madison) Limestone. Deposited in an inland sea, chert, gypsum, and anhydrite lenses within the limestone are evidence of high periods of evaporation. When sea levels dropped at the end of the Mississippian, dissolution of the limestone formed a Kaskaskia paleo karst terrain, complete with solution fissures, sinkholes, and caves. Thus, an unconformity exists between this limestone and the overlying Pennsylvanian Minnelusa Formation. These red sands and clays filled in cavities. Those cavities not filled in were coated in dogtooth spar. Subsequent deposition of the Permian Opeche Shale, Permian Minnekahta Limestone, Triassic Spearfish Formation, and Tertiary White River Group followed. Paleocene and Eocene erosion removed these overlying sediments, in the area of the caves, down to the Minnelusa. Geologic uplift started during the Laramide Orogeny, which lowered the water table, draining the cave system and enlarging it. Today the water level is 150 m below the surface, which amounts to a drop of 0.4 m every 1000 years. [13]

Boxwork was first noted in Wind Cave. These calcite fins were once crack filling gypsum and anhydrite. Calcite-gypsum pseudomorphs are common. The released sulfuric acid weakened the bedrock, allowing it to weather faster than the calcite. The resultant intersecting fins form open chambers and protrude from the surrounding bedrock by amounts ranging from 0.6 to 1.2 m. Lower levels of the cave have boxworks mixed with frostwork and cave popcorn. Helictite bushes were also first discovered in Wind Cave. Moonmilk is found on many surfaces, while calcite rafts are found in the lower levels of the cave system. [13]:18,20–21

During the 2020 Democratic Party presidential primary debate on December 19, 2019, candidate Senator Amy Klobuchar referenced the Wind Cave as part of an attack on fellow candidate Mayor Pete Buttigieg, who had hosted a campaign fundraiser in a purported wine cave. Klobuchar remarked, “I came here to make a case for progress, and I have never even been to a wine cave. I’ve been to the Wind Cave in South Dakota, which I suggest you go to.” [14] South Dakota public figures, including the state's Representative Dusty Johnson, used it to promote tourism to Wind Cave National Park. [15]