Badlands National Park ( Lakota: Makȟóšiča [3]) is an American national park located in southwestern South Dakota. The park protects 242,756 acres (379.3 sq mi; 982.4 km2) [1] of sharply eroded buttes and pinnacles, along with the largest undisturbed mixed grass prairie in the United States. The National Park Service manages the park, with the South Unit being co-managed with the Oglala Lakota tribe. [4]

Authorized as Badlands National Monument on March 4, 1929, it was not established until January 25, 1939. Badlands was redesignated a national park on November 10, 1978. [10] Under the Mission 66 plan, the Ben Reifel Visitor Center was constructed for the monument in 1957–58. The park also administers the nearby Minuteman Missile National Historic Site. The movies Dances with Wolves (1990) and Thunderheart (1992) were partially filmed in Badlands National Park. [11]

For 11,000 years, Native Americans have used this area for their hunting grounds. Long before the Lakota were the little-studied paleo-Indians, followed by the Arikara people. Their descendants live today in North Dakota as a part of the Three Affiliated Tribes. Archaeological records combined with oral traditions indicate that these people camped in secluded valleys where fresh water and game were available year-round. Eroding out of the stream banks today are the rocks and charcoal of their campfires, as well as the arrowheads and tools they used to butcher bison, rabbits, and other game. From the top of the Badlands Wall, they could scan the area for enemies and wandering herds. If hunting was good, they might hang on into winter, before retracing their way to their villages along the Missouri River. The Lakota people were the first to call this place "mako sica" or "land bad." Extreme temperatures, lack of water, and the exposed rugged terrain led to this name. French-Canadian fur trappers called it "les mauvaises terres pour traverser," or "bad lands to travel through." [12] By one hundred and fifty years ago, the Great Sioux Nation consisting of seven bands including the Oglala Lakota, had displaced the other tribes from the northern prairie.

The next great change came toward the end of the 19th century as homesteaders moved into South Dakota. The U.S. government stripped Native Americans of much of their territory and forced them to live on reservations. In the fall and early winter of 1890, thousands of Native Americans, including many Oglala Sioux, became followers of the Indian prophet Wovoka. His vision called for the native people to dance the Ghost Dance and wear Ghost shirts, which would be impervious to bullets. Wovoka had predicted that the white man would vanish and their hunting grounds would be restored. One of the last known Ghost Dances was conducted on Stronghold Table in the South Unit of Badlands National Park. As winter closed in, the ghost dancers returned to Pine Ridge Agency. The climax of the struggle came in late December 1890. Headed south from the Cheyenne River, a band of Minneconjou Sioux crossed a pass in the Badlands Wall. Pursued by units of the U.S. Army, they were seeking refuge in the Pine Ridge Reservation. The band, led by Chief Spotted Elk, [13] was finally overtaken by the soldiers near Wounded Knee Creek in the Reservation and ordered to camp there overnight. The troops attempted to disarm Big Foot's band the next morning. Gunfire erupted. Before it was over, nearly three hundred Indians and thirty soldiers lay dead. The Wounded Knee Massacre was the last major clash between Plains Indians and the U.S. military until the advent of the American Indian Movement in the 1970s, most notably in the 1973 standoff at Wounded Knee, South Dakota.

Wounded Knee is not within the boundaries of Badlands National Park. It is located approximately 45 miles (72 km) south of the park on Pine Ridge Reservation. The U.S. government and the Oglala Lakota Nation have agreed that this is a story to be told by the Oglala of Pine Ridge and Minneconjou of Standing Rock Reservation. The interpretation of the site and its tragic events are held as the primary responsibility of these survivors.

False-color satellite image of the park ( click to enlarge)

The history of the White River Badlands as a significant paleontological resource goes back to the traditional Native American knowledge of the area. The Lakota found large fossilized bones, fossilized seashells and turtle shells. They correctly assumed that the area had once been under water, and that the bones belonged to creatures which no longer existed. [14] Paleontological interest in this area began in the 1840s. Trappers and traders regularly traveled the 300 miles (480 km) from Fort Pierre to Fort Laramie along a path which skirted the edge of what is now Badlands National Park. Fossils were occasionally collected, and in 1843 a fossilized jaw fragment collected by Alexander Culbertson of the American Fur Company found its way to a physician in St. Louis by the name of Hiram A. Prout.

For a more complete list of fossil animals discovered in the formations that make up Badlands National Park and surrounding areas, see Category:White River Fauna.

Aspects of American homesteading began before the end of the American Civil War; however, it did not affect the Badlands until the 20th century. Then, many hopeful farmers traveled to South Dakota from Europe or the eastern United States to try to seek out a living in the area. In 1929, the South Dakota Dept. of Agriculture published an advertisement to lure settlers to the state. On this map they called the Badlands, "The Wonderlands", promising "...marvelous scenic and recreational advantages". The standard size for a homestead was 160 acres (0.3 sq mi; 0.6 km2). Being in a semi-arid, wind-swept environment, this proved far too small of a holding to support a family. In 1916, in the western Dakotas, the size of a homestead was increased to 640 acres (1.0 sq mi; 2.6 km2). Cattle grazed the land, and crops such as winter wheat and hay were cut annually. However, the Great Dust Bowl events of the 1930s, combined with waves of grasshoppers, proved too much for most of the settlers of the Badlands. Houses, which had been built out of sod blocks and heated by buffalo chips, were abandoned.

Military use of Stronghold District 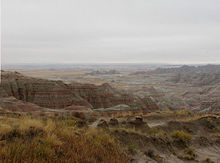 Badlands in the northern portion of Pine Ridge Indian Reservation

As part of the World War II effort, the U.S. Army Air Force (USAAF) took possession of 341,726 acres (533.9 sq mi; 1,382.9 km2) of land on the Pine Ridge Indian Reservation, home of the Oglala Sioux people, for a gunnery range. Included in this range was 337 acres (0.5 sq mi; 1.4 km2) from the Badlands National Monument. This land was used extensively from 1942 through 1945 as an air-to-air and air-to-ground gunnery range including both precision and demolition bombing exercises. After the war, portions of the bombing range were used as an artillery range by the South Dakota National Guard. In 1968, most of the range was declared excess property by the USAF. Although 2,500 acres (3.9 sq mi; 10.1 km2) were retained by the USAF (but are no longer used) the majority of the land was turned over to the National Park Service.

Firing took place within most of the present-day Stronghold District. Land was bought or leased from individual landowners and the Tribe in order to clear the area of human occupation. Old car bodies and 55 gallon drums painted bright yellow were used as targets. Bulls-eyes 250 feet (76 m) across were plowed into the ground and used as targets by bombardiers. Small automatic aircraft called " target drones" and 60-by-8-foot (18 by 2 m) screens dragged behind planes served as mobile targets. Today, the ground is littered with discarded bullet cases and unexploded ordnance.

In the 1940s, 125 families were forcibly relocated from their farms and ranches, including Dewey Beard, a survivor of the Wounded Knee Massacre. Those that remained nearby recall times when they had to dive under tractors while out cutting hay to avoid bombs dropped by planes miles outside of the boundary. In the town of Interior, both a church and the building housing the current post office were struck by six inch (152 mm) shells through the roof. Pilots operating out of Ellsworth Air Force Base near Rapid City found it a real challenge to determine the exact boundaries of the range. There were no civilian casualties. However, at least a dozen flight crew personnel lost their lives in plane crashes.

The Stronghold District of Badlands National Park, co-managed by the National Park Service and the Oglala Lakota Tribe, is a 133,300-acre (208.3 sq mi; 539.4 km2) area.[ citation needed] Deep draws, high tables and rolling prairie are characteristic of these lands occupied by the earliest plains hunters, the paleo-Indians, and the Lakota Nation.

On March 4. 1929, President Calvin Coolidge signed Public Law No. 1021, authorizing the Badlands National Monument in South Dakota. [15] [16] The legislation’s conditions for eventual proclamation included, the acquisition of privately owned land within the proposed boundaries of the monument, and the construction of a 30 mile highway throughout the park. [17] The Badlands National Monument became the seventy-seventh monument within the National Park Service a decade after its original authorization, when President Franklin D. Roosevelt signed the enacting proclamation on January 24. 1939. The monument was later renamed “Badlands National Park” in 1978. [18] [19]

The Badlands National Monument was established in order to preserve the natural scenery and educational resources within its boundaries. The bill authorized specific scientific and educational institutions to excavate within the monument in the pursuit of educational, geological, and zoological observation. The bill includes a portion highlighting the potential for fossil excavation in the monument's geological formations. [20]

In 1963, 50 bison from Theodore Roosevelt National Park were released into the parkland. The herd has grown to over 1,000 animals. [27]

According to the Köppen climate classification system, Badlands National Park has a cold semi-arid climate (Bsk).

The Badlands National Park has been impacted by the rise of oil and gas pipelines/drilling, the debate over Native American land rights, and fossil loss due to criminal activity.

The Badlands National Park faces growing encroachment from oil and gas companies hoping to transport fossil fuels throughout regions of South Dakota. Pipelines are associated with environmental risks; breaches and or breaks in the system have the potential to negatively impact the quality of life for surrounding ecosystems and wildlife. Additionally, the Badlands is quickly being surrounded by drilling and fracking projects. [29] [30] [31]

The Badlands National Park also faces debate over the federal claims to the land once inhabited by the Oglala Lakota Sioux tribe. Supporters of Oglala Sioux reparations argue against the U.S. government's seizure and management over sacred Native American land. The Badlands National Park began taking steps to reserve part of the park's southern unit for management by the tribe's members, creating jobs and returning ownership to those re-located out during America's Manifest Destiny, however this creation of the “ Tribal National Park” has yet to come to pass. [32]

The Badlands National Park was first established as a national monument in order to protect the abundance of fossils within the land’s natural stone structures. Since the park's founding, visitors and fossil poachers/hunters have been looting the park’s fossils to keep for sentimental and scientific value or to sell for profit. [33]