From Wikipedia, the free encyclopedia
Stadium in Florida, United States

Camping World Stadium is a stadium in Orlando, Florida, located in the West Lakes neighborhood of Downtown Orlando, west of new sports and entertainment facilities including the Amway Center, the Dr. Phillips Center for the Performing Arts, and Exploria Stadium. [2] It opened in 1936 as Orlando Stadium and has also been known as the Tangerine Bowl and Florida Citrus Bowl. The City of Orlando owns and operates the stadium. [3]

Camping World Stadium is the current home venue of the Citrus Bowl and the Camping World Bowl. It is also the regular host of other college football games including the Florida Classic between Florida A&M and Bethune-Cookman, the MEAC/SWAC Challenge, and the Camping World Kickoff. The stadium was built for football and in the past, it has served as home of several alternate-league football teams. From 2011 to 2013, it was the home of the Orlando City SC, a soccer team in USL Pro. [4] From 1979 to 2006, it served as the home of the UCF Knights football team (since 2007, the team has played at university-owned and campus-based Spectrum Stadium). It was also one of the nine venues used for the 1994 FIFA World Cup.

Construction on the stadium began in 1936 as a project of the Works Progress Administration under President Franklin D. Roosevelt during the Great Depression. [5] The stadium was built to the immediate east of the baseball park Tinker Field, which opened in 1914. The stadium opened later in 1936 with a capacity of 8,900 as Orlando Stadium. [6] The first college football bowl game was played on January 1, 1947. Catawba defeated Maryville 31–6 in the inaugural Tangerine Bowl. 2,000 seats were added in 1952. During this period, the stadium was known as the Tangerine Bowl. 5,000 more seats were added in 1968, along with the first press box.

From 1974 to 1976 an expansion project raised the capacity 50,612, including a 3,600-seat upper deck on the east sidelines. However, shortly after completion the project proved to be a public fiasco and potentially an architectural and engineering failure. On November 27, 1976 the first major game was held at the expanded stadium, a regular season matchup between Florida and Miami. During the game, the newly-constructed upper deck noticeably swayed whenever fans stood up and cheered. [7] The deck vibrated, fences and railings shook and creaked, causing an unnerving sensation for the patrons sitting in those sections. The swaying and shaking was noticeable again about a month later during the 1976 Tangerine Bowl game. The swaying was so pronounced that some fans vowed never to sit in those seats again, while some refused to return to the stadium at all. [8] [9] Before long, engineering evaluations, as well as legal investigations, uncovered numerous missteps, rushing, and cut corners in the stadium's design. While it was believed that the upper deck was structurally sound and met building codes, it nevertheless was deemed a failure. Additional problems included inadequate access to restrooms in the upper deck, gaps between the sections which required obstructive fences, and the fact that the upper deck was built at such an angle that it had poor sight lines. [10] [11] Meanwhile, unsightly I-beams installed to hold up the upper deck now blocked seats in the lower deck that were previously unobstructed. [12] [13]

The maligned stadium's reputation was heavily tarnished after the upper deck scandal, criticized by public officials, media, and fans. Further complicating the situation was UCF's pending move to the stadium for 1979. The city finally received a settlement of $900,500 from the stadium's engineers, architects, and designers, money that was soon appropriated for new improvements. The infamous steel east upper deck was dismantled in May 1980. [14]

After various new improvements, and a $30 million renovation that added new concrete upper decks to both sides, a capacity of 65,438 was established in 1989. In 1983, the Florida Department of Citrus was added as a title sponsor for the facility, at a price of $250,000. From 1999 to 2002, key stadium improvements included the addition of contour seating, two escalators, and a new 107-foot (33 m) wide scoreboard/video screen. A new sound system, along with two full-color ribbon displays along the upper decks, were also added. The expansion resulted in the upper deck overhanging Tinker Field's right field area, albeit at a significant height. [15]

Camping World Stadium has been home field to several short-lived professional football teams. From 1966 to 1970, the stadium was home to the Orlando Panthers of the Continental Football League. In 1974, the Florida Blazers of the World Football League played their only season in existence at the Tangerine Bowl. The USFL's Orlando Renegades played one season in 1985. The Orlando Thunder of the WLAF called the Citrus Bowl home in their two-season existence during the early 1990s, while the XFL's Orlando Rage played there in 2001 as well as the UFL's Florida Tuskers, occupying the stadium for 2 seasons from 2009, before moving to Virginia Beach as the Virginia Destroyers in 2011. The Orlando Fantasy of the Lingerie Football League moved to the stadium shortly after, having prior used the UCF Arena.

The varsity football team from nearby Jones High School used Camping World Stadium as a regular season home field for decades through the end of their 2011 season. The school started playing home football games on their own field beginning on August 31, 2012.

Rollins College, Winter Park, Florida, was the first college to use the then named Orlando Stadium as its home field. It played there prior to and after World War II.

The stadium hosted the East–West Shrine Game (the longest running college senior bowl started in 1925) for two years, 2010 and 2011, before moving to Tropicana Field, located in St. Petersburg, Florida. From 2015 to 2018, Camping World Stadium hosted the Cure Bowl; it was moved to Orlando City Stadium in 2019. [17]

The playing surface is large enough for use in international soccer matches, and it was a venue for the 1994 FIFA World Cup. In five matches, attendance averaged over 60,000 per match. In 1996, Olympic soccer matches in both the men's and women's competitions were held at the stadium.

It hosted the USISL A-League Orlando Sundogs in 1997. It also hosted the Major League Soccer All-Star Game in 1998. The stadium was the home of Orlando City SC, a soccer team in the USL Pro League. In 2013, the investment group that owned that club was awarded an expansion team in Major League Soccer. They spent their 2014 season in USL Pro at ESPN Wide World of Sports Complex in Lake Buena Vista while Camping World Stadium was being renovated.

Orlando City played their final USL Pro match at Camping World Stadium on September 6, 2013. They won the USL Pro Championship over Charlotte Eagles, 7–4, before a crowd of 20,886. [18] The last soccer event held at Camping World Stadium before its renovation was an international friendly between the women's teams of the United States and Brazil. The U.S. won the match, 4–1, before a crowd of 20,274. [19]

Camping World Stadium was one of the venues for Copa América Centenario in June 2016. Three group stage matches were held there, Paraguay vs Costa Rica on June 4, Bolivia vs Panama on June 6 and Brazil vs Haiti on June 8.

On March 30, 2008, the Citrus Bowl held WWE's WrestleMania XXIV. This was the first WrestleMania to be held in the state of Florida, and the second to be held outdoors. Nine professional wrestling matches were scheduled for the event, which featured a supercard of more than one main bout. At 74,635, [20] it was the largest crowd, at the time, ever to attend an event at the venue. [21] 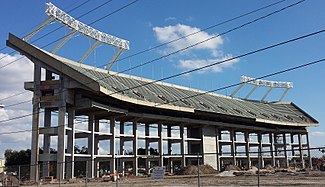 Upper deck during renovations in 2014

By 2005, Orlando-area government officials and officials from the University of Central Florida expressed dissatisfaction with the state of the facility and lack of revenue, as while UCF was the primary leasing tenant for the facility, it received minimal revenue from football games. Lack of an agreement to rectify these issues led UCF to consider relocating, or spend considerable expense to upgrade the facility at its own cost. In addition, the stadium's capacity was seen as too large for UCF, leaving the stadium an appearance of being empty even with attendance of as much as 30,000–40,000 people per game. UCF's all-time attendance record was 51,978 for the 2005 C-USA Championship Game versus Tulsa. Furthermore, the stadium was located over 10 miles (16 km) from the university's main campus in East Orlando, with travel times of up to a half-hour due to traffic. In 2005, UCF officials led by university president John Hitt made the decision to construct a new on-campus stadium, which opened for the 2007 season.

Orlando officials began exploring stadium refurbishment project in 2004, when the Capital One Bowl bid to become a Bowl Championship Series (BCS) game, but was not chosen due to the stadium's aging condition. Camping World Stadium also submitted a bid for the ACC Championship Game, but lost to Jacksonville Municipal Stadium. The key reasons for losing the bids were the lack of modern luxury boxes, bench seating, and capacity. The hopes for Camping World Stadium became reality when, on September 29, 2006, Orlando Mayor Buddy Dyer announced an agreement on a $175-million renovation of Camping World Stadium. It is part of the "Triple Crown for Downtown", a $1.1-billion plan to redo the Orlando Centroplex with a new $480-million arena for the Orlando Magic, a new $375-million performing arts center, and the Camping World Stadium improvements. Conceptual drawings for the possible improvements include enclosed concourses on the east and west sides of the stadium and additions to the north side that will finally complete the lower bowl. [25] The Orlando/Orange County Interlocal Agreement was approved by the Orlando City Council on August 6, 2007. However, the plans were heavily affected by the Great Recession of 2007–08.

In 2010, the natural grass surface was replaced with AstroTurf Gameday Grass 3D after the 2009 Champs Sports Bowl and 2010 Capital One Bowl were marred by poor field conditions that led to two football player injuries. Stadium conditions once again prompted a review of the stadiums condition. Finally, it was announced in May 2013 that the Florida Citrus Bowl Stadium would undergo a reconstruction during 2014, at a cost of less than US$200 million. The cost estimate as of March 2014 was US$207 million. The stadium's upper level seating was retained, but the entire lower bowl structure was demolished.

The reconstruction began immediately following a groundbreaking event held at the stadium on January 29, 2014 and demolition of the entire lower bowl lasted 25 days. The first event at the renovated Camping World Stadium was the 2014 edition of the Florida Classic on November 22, 2014. The Bethune-Cookman Wildcats defeated the Florida A&M Rattlers, 18–17 in overtime. [26]

Orlando City returned to the renovated Camping World Stadium for the 2015 season, their first season in Major League Soccer, while awaiting construction of their own soccer-specific stadium. In their first match, a 1–1 draw against fellow expansion team New York City FC on March 8, 2015, they drew a sellout crowd of 62,510, the largest attendance for a soccer match at the venue. [27]

The United States women's national soccer team returned to Camping World Stadium on October 25, 2015. They defeated Brazil again, 3–1. The attendance of 32,869 was the largest attendance for a standalone USWNT friendly in the state of Florida. [28]

The Orlando Pride, the expansion National Women's Soccer League team owned by Orlando City SC, played in Camping World Stadium until the Orlando City Stadium was complete. On April 23, 2016, they broke the record for attendance at an NWSL game, setting at 23,403, when the Pride beat the Houston Dash, 3–1. [29]

On November 19, 2015, CONCACAF and CONMEBOL announced that Camping World Stadium would be one of the host venues for the Copa América Centenario soccer tournament in 2016. [30]

Following the renovation, the seating capacity was reduced to 60,219 due to the introduction of chair-back seats in the lower bowl and Plaza Level. The upper deck continues to have bleachers. Temporary bleachers can be added in the Plaza level in place of the Party Deck to increase the capacity to 65,194. [33]