From Wikipedia, the free encyclopedia
Not to be confused with Los Angeles County Fire Department. 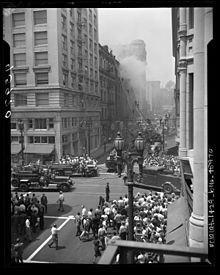 LAFD on the scene of a fire in the Bradbury Building, Downtown Los Angeles in 1947.

The Los Angeles Fire Department has it origins in the year 1871. [7] [8] [9] In September of that year, George M. Fall, the County Clerk for Los Angeles County organized Engine Company No. 1. It was a volunteer firefighting force with an Amoskeag fire engine and a hose jumper (cart). The equipment was hand-drawn to fires. In the spring of 1874, the fire company asked the Los Angeles City Council to purchase horses to pull the engine. The Council refused and the fire company disbanded. [10]

All of these companies remained in service until February 1, 1886, when the present paid fire department came into existence. [10]

In 1877, the first horses were bought for the city fire department. The department would continue to use horses for its equipment for almost fifty years, phasing out the last horse drawn equipment on July 19, 1921. [11]

By 1900, the Department had grown to 18 fire stations with 123 full-time paid firefighters and 80 fire horses. [11] The city had also installed 194 fire-alarm boxes allowing civilians to sound the alarm if a fire was spotted. 660 fire hydrants were placed throughout the city, giving firefighters access to a reliable water source. [12] In 1955 Station 78 in Studio City became the first racially integrated station in the department. [13]

Since 1978 LAFD has provided emergency medical and fire suppression services to the city of San Fernando by contract . [14]

The department utilizes a wide array of apparatus and equipment. these are most but not all of the apparatus. 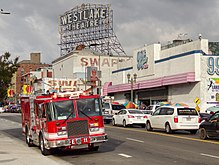 The triple combination Fire Engine or “TRIPLE” (as it is commonly called) is the most common type of firefighting apparatus in Los Angeles. The term “triple combination” refers to the apparatus having three components; water tank, high capacity water pump, and hose. The triple can be found as a one-piece engine company or as two engines assigned to a Task Force station. The “Triples” used by the LAFD have a direct drive, dual centrifuge main pump rated at 1500 GPM at 150 psi with a 10 foot lift through a 6 inch suction. These apparatus carry a combination of all of the following sizes of hose; 4″, 2 1/2″, 1 3/4″, 1 1/2″ and 1″. The standard hose load is 750' of 4", 750' of 2 1/2" with a 325GPM nozzle, 400' of 1 3/4" with a 200 GPM nozzle, 400' of 1 1/2" with a 125 GPM nozzle and 500' of 1" with a dual gallonage 10/40 GPM nozzle. The water tank carrying capacity of all LAFD engines is 500 gallons. All frontline engines are equipped with a 30 gallon Class A foam injection system with the exception of Engine 51 at LAX that carries Class B foam in the onboard system. These apparatus are staffed by four members, including a Captain who is the company commander, an Engineer responsible for driving, maintaining and operating the pump, and two firefighters. A number of triples in the LAFD are also Paramedic assessment companies – meaning they include a Firefighter/Paramedic as part of the crew.

LAFD on the scene of a Major Emergency Structure Fire

The LAFD uses the concept of Light Forces and Task Forces which can be considered one "Resource", although comprising more than one unit or company. [15]

A Light Force is composed of a Pump Engine (200 Series, for example Engine 201 or Engine 301 for 100 stations) and a Ladder Truck. [16] Light forces will almost always respond together as one unit or resource. [15]

Rescue Ambulance 11 responding to a call near MacArthur Park

Rescue Ambulances (RAs), often called 'rescues' for short, can be considered either advanced life support (ALS), or basic life support (BLS). Ambulances number 1-112 are frontline ALS staffed by 2 firefighter / paramedics, while those in the 200 series are ALS reserves. [17] Ambulances in the 800s are BLS staffed by 2 firefighter EMTs, while those in the 900s are BLS reserves. [17] 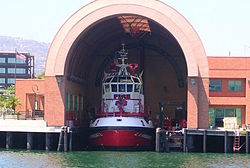 The Los Angeles Fire Department is the founding member of one of California's eight FEMA Urban Search and Rescue Task Forces. [29] California Task Force 1 (CA-TF1) is available to respond to natural or man-made disasters around the county and world and assist with search and rescue, medical support, damage assessment and communications. [30]

Engine 59 at the scene of a structure fire

The LAFD is divided into four operations divisions, now called bureaus: The Central Bureau, West Bureau, and South Bureau (formerly South Division), and the Valley Bureau (formerly North Division). Each bureau is commanded by an Assistant Chief, who in turn commands several battalions with the Central and West bureau having 3 Battalions while the South Bureau has 4 Battalions, with the valley bureau having 5 Battalions, with each battalion led by a battalion chief. [31] The Los Angeles Fire Department currently operates 106 Fire Stations, organized into 14 Battalions.

Note that stations with both a truck and a 200 series engine (pump) will usually respond the two apparatus together as a lightforce. So, for example, Truck 1 and Engine 201 will often respond together as Light Force 1. [16] The only full time exception is Fire Station 9 where Engine 209 is fully staffed. Truck 9 responds as a single company when appropriate. During "Augmented Staffing" (red-flag brush fire weather, or other increased threat days) the 200 series engines can be fully staffed as a 4 member Engine Company. Each company can then either be dispatched individually or as a "Task Force".

The LAFD has been featured in many TV shows and movies. Sometimes the LAFD or LAFD equipment is just seen in the background.