The Bradbury Building is an architectural landmark in downtown Los Angeles, California. Built in 1893, [1] the five-story office building is best known for its extraordinary skylit atrium of access walkways, stairs and elevators, and their ornate ironwork. The building was commissioned by Los Angeles gold-mining millionaire Lewis L. Bradbury and constructed by draftsman George Wyman from the original design by Sumner Hunt. [5] It appears in many works of fiction and has been the site of many movie and television shoots and music videos.

The building was added to the National Register of Historic Places in 1971, and was designated a National Historic Landmark in 1977, one of only four office buildings in Los Angeles to be so honored. [6] It was also designated a landmark by the Los Angeles Cultural Heritage Commission [7] and is the city's oldest landmarked building. [8]

Lewis L. Bradbury (November 6, 1823 – July 15, 1892) [9] [10] [11] was a gold-mining millionaire [6] – he owned the Tajo mine in Sinaloa, Mexico – who became a real estate developer in the later part of his life. [12] In 1892 he began planning to construct a five-story building at Broadway and Third Street in Los Angeles, close to the Bunker Hill neighborhood. A local architect, Sumner Hunt, was hired to design the building, and turned in a completed design, [5] but Bradbury dismissed Hunt's plans as inadequate to the grand building he wanted. He then hired George Wyman, one of Hunt's draftsmen, to do the design. [13] Bradbury supposedly felt that Wyman understood his own vision of the building better than Hunt did, but there is no concrete evidence that Wyman changed Hunt's design, which has raised some controversy about who should be considered to be the architect of the building. [5] Wyman had no formal education as an architect, and was working for Hunt for $5 a week at the time. [6] 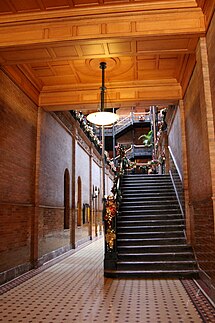 An entryway with holiday decorations in December 2011

The building has operated as an office building for most of its history. It was designated a National Historic Landmark in 1977. [4] [15] It was purchased by noted developer and champion of downtown restoration Ira Yellin [16] in the early 1980s, [17] who invested $7 million in restoration, [6] preservation, and seismic retrofitting between 1989-1991. As part of the restoration, a storage area at the south end of the building was converted to a new rear entrance portico, connecting the building more directly to Biddy Mason Park and the adjacent Broadway Spring Center parking garage. The building's lighting system was also redesigned, bringing in alabaster wall sconces from Spain.

Since 1996, the building has served as the headquarters for the Los Angeles Police Department's Internal Affairs division [18] and other government agencies. The LAPD Board of Rights holds officer discipline hearings here, and within the force it is given the nickname "the Ovens", because officers see it as the place they "get burned." [19] The LAPD has a 50-year lease on their space. [18]

The building was purchased for $6 million in 2003 by a Hong Kong investor, less than the $7 million Ira Yellin invested just to rehabilitate and seismically retrofit the structure after acquiring it in 1989, [20] a reflection of Yellin's commitment to downtown preservation and restoration. [20] It was never listed for sale, only offered to a select group of potential buyers who would respect its legacy and retain its character. The building, according to Yellin’s widow, Adele, at the time, was “in very good hands”. [20]

Several of the offices are rented out to private concerns, including Red Line Tours. The retail spaces on the first floor currently house Ross Cutlery, where O.J. Simpson purchased a stiletto that figured in his murder trial, a Subway sandwich restaurant, a Blue Bottle Coffee shop, and a real estate sales office for loft conversions in other nearby historic buildings.

As of 2018 [update], the Berggruen Institute maintains its offices in the building. [25] 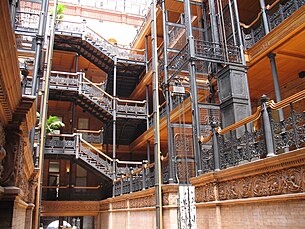 The building's undistinguished exterior facade of brown brick, sandstone and terra cotta detailing was designed in the commercial vernacular Italian Renaissance Revival style current at the time. Its interior is its most notable part. [26]

The narrow entrance lobby, with its low ceiling and minimal light "has the look of a Parisian alley of arched windows", and opens into a bright naturally lit great "awe-inspiring cathedral-like" [14] center court. Robert Forster, star of the TV series Banyon that used the building for his office, described it as "one of the great interiors of L.A. Outside it doesn't look like much, but when you walk inside, suddenly you're back a hundred and twenty years." [27]

The five-story central court features glazed and unglazed yellow and pink bricks, [14] ornamental cast iron, [20] tiling, Italian marble, Mexican tile, [6] decorative terra cotta [14] and polished wood, capped by a skylight that allows the court to be flooded with natural rather than artificial light, creating ever-changing shadows and accents during the day. At the time the building was completed, it featured the largest plate-glass windows in Los Angeles. [6]

Open "bird-cage" elevators surrounded by wrought-iron grillwork go up to the fifth floor. [6]

Geometric patterned staircases and wrought-iron and polished oak railings are used abundantly throughout. The wrought-iron was created in France and displayed at the 1893 Chicago World's Fair before being installed in the building. Freestanding mail-chutes also feature ironwork. The overall effect, according to a Los Angeles Times writer, is "a mesmerizing degree of symmetry and visual complexity". [14]

The building is a popular tourist attraction. It is open daily and staffed by a government worker who provides historical background on it. Casual visitors are only permitted up to the first landing. Brochures and tours are also available. It is close to three other downtown Los Angeles landmarks: the Grand Central Market, the Million Dollar Theater (across the street) and Angels Flight (two blocks away). Access is via the Los Angeles MTA Red Line's Civic Center exit, three blocks distant. 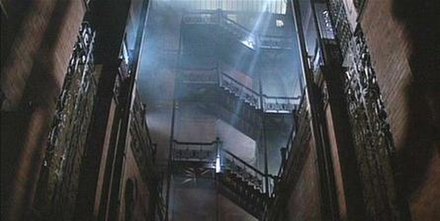 The Bradbury Building in Blade Runner

The Bradbury Building made a memorable place in film history as the insurance office central to the 1945 film noir classic Double Indemnity. [28] It has subsequently been featured prominently as a setting in many films, television shows, and in literature – particularly in the science fiction genre. [29] Most notably, the building is a setting in the 1982 science fiction film Blade Runner, for the character J. F. Sebastian's apartment, and the climactic rooftop scene. [30]

Television series that featured the building include the 1964 The Outer Limits episode " Demon with a Glass Hand", and the 1962 Perry Mason episode "The Case of the Double-Entry Mind." During the season six episodes (1963–64) of the series 77 Sunset Strip, the Stuart "Stu" Bailey character had his office in the Bradbury. In Quantum Leap the building is seen carrying the name "Gotham Towers" in "Play It Again, Seymour", the last episode of the first season (1989). The building appeared in at least one episode of the television series Banyon (1972–73), where it was used as Robert Forster's office, [34] City of Angels (1976) and Mission: Impossible (1966–73), [33] as well as Ned and Chuck's Apartment in Pushing Daisies, which debuted in 2007. [29] The building was also the setting for a scene from the series FlashForward in the episode "Let No Man Put Asunder". In 2010 the building was transplanted to New York City for a two-part episode of CSI NY. The Bradbury Building and a fake New York City subway entrance across the street were also used to represent the exterior of New York's High School for the Performing Arts in the opening credits of the television series Fame. The building appears as itself in multiple episodes of the fourth season of Amazon Studios' original series Bosch, in both exterior establishing shots, and interior shots.

The Bradbury appeared in a 1979 music video by Cher called "Take Me Home" in addition to music videos from the 1980s by Heart, Janet Jackson, Earth Wind and Fire and Genesis, and a Pontiac Pursuit commercial. Part of Janet Jackson's 1989 film short Janet Jackson's Rhythm Nation 1814 was filmed in the building as well. The interior appears in the music video for the Pointer Sisters' 1980 song, " He's So Shy". The Bradbury Building was prominently featured in Monica's 1998 single " The First Night" as well in Tony! Toni! Toné!'s "Let's Get Down" music video. In 2016, the interiors were featured in the music video for "The Road" by Chinese musician Huang Zitao. [35]

The Bradbury has frequently appeared in popular literature. In the "Nathan Heller" series of detective novels by Max Allan Collins, Heller's A-1 Detective Agency's Los Angeles offices are housed in the Bradbury, as shown in the novel Angel in Black. In the Star Trek novel The Case of the Colonist's Corpse: A Sam Cogley Mystery, the protagonist works from the Bradbury Building four hundred years in the future. Other appearances occur in The Man With The Golden Torc by Simon R. Green, Angels Flight and The Black Box by Michael Connelly, and the science fiction multiple novel series The World Of Tiers by Philip Jose Farmer. [29]

DC Comics and Marvel Comics – the latter of which has offices in the real Bradbury Building – both published comic book series based on characters that work in the historic landmark. The building serves as the headquarters for the Marvel Comics team The Order, and in the DC universe, the Human Target runs his private investigation agency from the building. [29]

The building was used for the music video for " Say Something", a song released on January 25, 2018 by Justin Timberlake featuring Chris Stapleton.

Chris Brown filmed his music video, " Hope You Do," at this iconic location. [36]

The Bradbury Building was featured in "On Location", episode 172 of the podcast 99% Invisible. [37]

The building interior was shown in the title sequence for the TV series " The Ray Bradbury Theater" which aired from 1985-1992.[ citation needed]