From Wikipedia, the free encyclopedia
1928 building housing the government of the city of Los Angeles, California

Los Angeles City Hall, completed in 1928, is the center of the government of the city of Los Angeles, California, and houses the mayor's office and the meeting chambers and offices of the Los Angeles City Council. [5] It is located in the Civic Center district of downtown Los Angeles in the city block bounded by Main, Temple, First, and Spring streets, which was the heart of the city's central business district during the 1880s and 1890s. 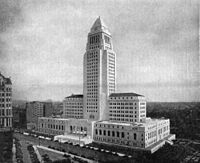 1931 photograph of then new City Hall with the now-demolished 10-story International Savings Bank to the immediate left. [6]

The building was designed by John Parkinson, John C. Austin, and Albert C. Martin, Sr., and was completed in 1928. Dedication ceremonies were held on April 26, 1928. It has 32 floors and, at 454 feet (138 m) high, is the tallest base-isolated structure in the world, having undergone a seismic retrofit from 1998 to 2001 so that the building will sustain minimal damage and remain functional after a magnitude 8.2 earthquake. [7] The concrete in its tower was made with sand from each of California's 58 counties and water from its 21 historical missions. [2] City Hall's distinctive tower was based on the shape of the Mausoleum of Mausolus, [8] and shows the influence of the Los Angeles Public Library, completed shortly before the structure was begun. An image of City Hall has been on Los Angeles Police Department badges since 1940. [9]

To keep the city's architecture harmonious, prior to the late 1950s the Charter of the City of Los Angeles did not permit any portion of any building other than a purely decorative tower to be more than 150 ft (46 m).[ citation needed] Therefore, from its completion in 1928 until 1964, the City Hall was the tallest building in Los Angeles, and shared the skyline with only a few structures having decorative towers, including the Richfield Tower and the Eastern Columbia Building.

City Hall has an observation deck, free to the public and open Monday through Friday during business hours. The peak of the pyramid at the top of the building is an airplane beacon named in honor of Colonel Charles A. Lindbergh, the Lindbergh Beacon. Circa 1939, there was an art gallery, in Room 351 on the third floor, that exhibited paintings by California artists. [10]

The building was designated a Los Angeles Historic-Cultural Monument in 1976. [11]

In 1998 the building was closed during a total $135 million refurbishment which also included upgrading it so it could withstand a magnitude 8.2 earthquake including permitting it to sway in a quake. [12]

Prior to the completion of the current structure, the L.A. City Council utilized various other buildings: 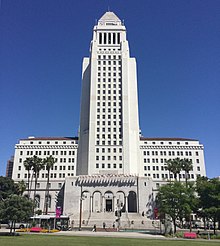 Tallest base-isolated structure in the world, built in 1928. A Neoclassical base with an Art Deco tower. Los Angeles Historic-Cultural Monument #150.

The Mayor of Los Angeles has an office in room 300 of this building and every Tuesday, Wednesday and Friday at 10:00am, the Los Angeles City Council meets in its chamber. City Hall and the adjacent federal, state, and county buildings are served by the Civic Center station on the LA Metro B Line and D Line. The Silver Line stops in front of the building.

An observation level is open to the public on the 27th floor. The interior of this floor, comprises a single large and highly vaulted room distinguished by the iconic tall square columns that are far more familiar as one of the building's most distinguishing exterior features. The Mayor Tom Bradley Room, as this large interior space is named, is used for ceremonies and other special occasions. 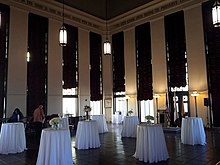 The Los Angeles Dodgers wore a commemorative uniform patch during the 2018 season celebrating 60 years in the city depicting a logo of Los Angeles City Hall. 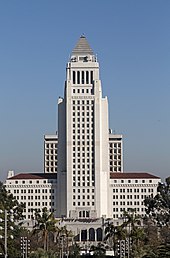 The City Hall from Hill Street

The building has been featured in the following popular movies and television shows: 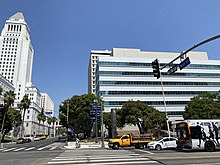 Looking north on Main St. from 1st St., 2020 with City Hall South (r), behind it a small portion of City Hall East; and on the left, City Hall proper

City Hall East, 200 N. Main St., is located in the South Plaza of the Los Angeles Mall, a sunken, multi-level series of open spaces and retail space on the east side of Main Street straddling Temple Street. It is an 18-story, Brutalist, 1972 building by Stanton & Stockwell, [22] featuring a mural by Millard Sheets, The Family of Man. [23] [24]