In this night-time aerial photograph of Los Angeles, San Pedro is in the center and right foreground, including part of the brightly lit Terminal Island. The dark peninsula to the left of San Pedro is Palos Verdes.

The island was originally called Isla Raza de Buena Gente [1] and later Rattlesnake Island. [2] It was renamed Terminal Island in 1891. [1]

In 1909, the newly reincorporated Southern California Edison Company decided to build a new steam station to provide reserve capacity and emergency power for the entire Edison system and to enable Edison to shut down some of its small, obsolete steam plants. The site chosen for the new plant was on a barren mudflat known as Rattlesnake Island, today's Terminal Island in Long Beach Harbor. Construction of Plant No. 1 began in 1910.

The land area of Terminal Island has been supplemented considerably from its original size. For instance, in the late 1920s, Deadman's Island in the main channel of the Port of Los Angeles was dynamited and dredged away, and the resulting rubble was used to add 62 acres (0.097 sq mi) to Terminal Island's southern tip. [3]:57

In 1930, the Ford Motor Company built a facility called Long Beach Assembly, having moved earlier operations from Downtown Los Angeles. The factory remained until 1958 when manufacturing operations were moved inland to Pico Rivera.

In 1927, a civilian facility, Allen Field, was established on Terminal Island. The Naval Reserve established a training center at the field and later took complete control, designating the field Naval Air Base San Pedro (also called Reeves Field). [3]:60 In 1941, the Long Beach Naval Station was located adjacent to the airfield. In 1942, the Naval Reserve Training Facility was transferred, and a year later NAB San Pedro's status was downgraded to a Naval Air Station (NAS Terminal Island). Reeves Field as a Naval Air Station was disestablished in 1947, although the adjacent Long Beach Naval Station continued to use Reeves Field as an auxiliary airfield until the late 1990s. [4] A large industrial facility now covers the site of the former Naval Air Station.

The island was home to about 3,500 first- and second-generation Japanese Americans prior to World War II [5] in an area known as East San Pedro or Fish Island. On February 9, 1942, following the Japanese attack on Pearl Harbor, the FBI incarcerated all of the adult Issei males on Terminal Island. On February 19, 1942, immediately after the signing of Executive Order 9066, Terminal Island's remaining inhabitants were given 48 hours to evacuate their homes. They were subsequently sent to internment camps, and the entire neighborhood was razed. The Japanese community on Terminal Island was the first to be evacuated and interned en masse. [6]

During World War II, Terminal Island was an important center for defense industries, especially shipbuilding. It was also, therefore, one of the first places where African Americans tried to effect their integration into defense-related work on the West Coast. [7]

In 1946, Howard Hughes moved his monstrous Spruce Goose airplane from his plant in Culver City to Terminal Island in preparation for its test flight. In its first and only flight, it took off from the island on November 2, 1947. [8]

Brotherhood Raceway Park, a ​1⁄4 mile drag racing strip, opened in 1974 on former US Navy land. It operated, with many interruptions, until finally closing in 1995 to be replaced by a coal-handling facility. [9]

Preservation of vacant buildings earned the island a spot on the top 11 sites on the National Trust for Historic Preservation's 2012 Most Endangered Historic Places List. [10] In mid-2013, the Los Angeles Board of Harbor Commissioners approved a preservation plan. [11] The trust cited the site as one of ten historic sites saved in 2013. [11]

The Port of Los Angeles and the Port of Long Beach are the major landowners on the island, who in turn lease much of their land for container terminals and bulk terminals. The island also hosts canneries, shipyards, and United States Coast Guard facilities.

The Long Beach Naval Shipyard, decommissioned in 1997, occupied roughly half of the island. Sea Launch maintains docking facilities on the mole that was part of the naval station.

Aerospace company SpaceX is initially leasing 12.4 acres (5.0 ha) from the Port of Los Angeles on the island at Berth 240. They will refurbish five buildings and raise a tent-like structure for research, design, and manufacturing. SpaceX has been building and testing its planned Starship crewed space transportation system intended for suborbital, orbital and interplanetary flight in Texas. The new SpaceX rocket, too large to be transported for long distances overland, will be shipped to the company's launch area in Florida or Texas by sea, via the Panama Canal. The 19 acres (7.7 ha) site was used for shipbuilding from 1918, and was formerly operated by the Bethlehem Shipbuilding Corporation and then the Southwest Marine Shipyard. The location has been disused since 2005. [12] [13] [14] 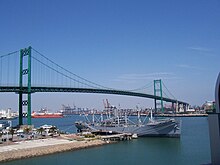 Terminal Island is connected to the mainland via four bridges. [15] To the west, the distinctive green Vincent Thomas Bridge, the fourth-longest suspension bridge in California, connects it with the Los Angeles neighborhood of San Pedro. The Gerald Desmond Bridge connects the island with downtown Long Beach to the east. The Commodore Schuyler F. Heim Bridge joins Terminal Island with the Los Angeles neighborhood of Wilmington to the north. Adjacent to the Heim Bridge is a rail bridge called the Henry Ford Bridge, or the Badger Avenue Bridge. [15]

Terminal Island is the setting at the start of The Terror: Infamy, season 2 of the AMC series, The Terror, before the Japanese American residents are relocated to internment camps following the bombing of Pearl Harbor, [16] [17] and at the end. Terminal Island is also the setting of the first truck heist scene in the film The Fast and the Furious.