From Wikipedia, the free encyclopedia
For other uses, see Echo Park.
Neighborhood of Los Angeles in California, United States

Echo Park is a densely populated neighborhood of over 43,000 residents in Central Los Angeles. It contains one high school and eight other schools, and has been home to many notable people. The neighborhood is centered on the lake of the same name.

First established in 1892, and long before “Hollywood” became synonymous with the commercial film industry, the area of Echo Park known as Edendale was the center of filmmaking on the West Coast. [1]

By the teens, several film studios were operating on Allesandro Avenue (now Glendale Boulevard) along the Echo Park-Silverlake border, including the Selig Polyscope Company, the Mack Sennett Studios, the Pathe West Coast Film Studio, and others. [1]

Several silent film stars worked in the Edendale studios, including Mabel Normand, Fatty Arbuckle, and Harold Lloyd. Charlie Chaplin’s first film was made in the Mack Sennett Studios, as well as the very first feature length comedy ever made, which starred Charlie Chaplin and Mabel Normand. [1]

The first pie-in-the-face scene was filmed at what later became the Mack Sennett Studios on Glendale Boulevard near Effie Street. The complex, which is now part of a storage facility, dates back to 1909 and includes one of the area’s first permanent sound stages, the factories where movies are made. The former studio, 1712 Glendale Blvd., is City of Los Angeles Historic-Cultural Monument No. 256. [1]

Echo Park Lake's earliest use by the city was as a reservoir. The Los Angeles Canal and Reservoir Co. formed Reservoir No. 4 in 1868. The company obtained the water by digging a ditch that sent water flowing from the Los Angeles River – in the area now known as Los Feliz – along a zigzag path that emptied into the reservoir. [1]

In 1891 the four owners of the surrounding area gave up 33 acres of land to the city around the reservoir so that it could be used as a park. The city began work landscaping the park in October 1892. [1] City parks superintendent Joseph Henry Tomlinson is recognized for coining the name of the new park – which later became the name of the neighborhood. He chose the name because of echoes he heard during the construction of Echo Park Lake in 1892. [2] By 1895, the park and accompanying boathouse were completed. [1]

By the late 19-teens, motion picture companies on Allesandro Street – now Glendale Boulevard – had been using the park as a filming location. City leaders responded by barring Keystone Studios, home of the Keystone Kops, from shooting any of its comedies at the lake, on the grounds that too many flowers were being trampled. [1]

Echo Park Lake was identified as an impaired body of water in 2006, and the city allocated $64.7 million dollars to fund its cleanup and revitalization. The lake was closed off and drained in the summer of 2011 when renovation work began. The rehabilitation project tackled Echo Park Lake not only as a recreational body of water, but also as an important part of the Los Angeles ecosystem. Although Echo Park Lake is man-made, it is part of the local watershed. The lake reopened on June 5, 2013 after a $45 million renovation.

The Glendale Freeway ( SR 2) was originally planned and constructed in 1959 to connect with the Hollywood Freeway (US-101) through the neighborhoods of Silver Lake and Echo Park but terminates roughly 1.5 miles (2.4 km) northeast of its intended terminus at the Hollywood Freeway (US-101) due to opposition from residents living and developers building on a hill that is now a private gated [3] community called Hathaway Estates. [4] In 1962, as a result of this local community opposition, the full build-out plan was rescinded and construction was terminated at the present SR-2 terminus near Glendale Bl and Duane St. Since then, commuter traffic coming of and on to SR-2 has passed through the community, primarily along Glendale Bl and Alvarado St and has contributed to congestion. [5] Since that plan has been scrapped, the freeway is somewhat isolated from the remainder of the LA freeway system. [6]

The Pacific Electric Railway, better known as the Red Cars used to run through Echo Park along the center of Glendale Blvd. The citywide system of electric trolleys began with the dawn of the 20th century, ultimately spinning a web of rail that linked cities in Los Angeles, Orange, San Bernardino and Riverside counties. It was the largest and most advanced public transit system in the world at the time.

The Red Car system was sold to Metropolitan Coach Lines, whose executive, Jesse Haugh, had connections to a public transportation company funded by General Motors and other auto-related industries. The Red Cars faded out of service not long afterwards, [7] with the Los Angeles-Glendale-Burbank Line that traveled through Echo Park officially ending service on June 19, 1955. [8]

Echo Park has been infamous as being a hot spot for gang activity. This was true in the 1980s and 1990s, but in the early 2010s as the neighborhood began gentrifying, rents started to sky rocket, and a controversial gang injunction forced gang members to move outside their turf, instances of gang violence waned. [9]

In 2013, a Los Angeles judge signed off on a permanent gang injunction aimed at six rival gangs in the Echo Park area creating what authorities call a “safety zone” for the area. The injunction targets the members of six gangs: Echo Park Locos, the Crazys, the Big Top Locos, the Diamond Street Locos, Frogtown Rifa, and Head Hunters. [10] The perimeter for the safety zone is roughly bound by the L.A. River to the north, the 110 Freeway to the east, Beverly Boulevard to south and Glendale Boulevard to the west. It includes Echo Park Lake park and Dodger Stadium. [11]

The injunction, a civil order, prohibits two or more listed gang members from associating in any way in public or in common areas like courtyards. It also allows for stricter penalties if any listed gang member is caught with drugs, alcohol, guns or vandalizing property. [11]

Echo Park has many rolling hills and valleys with a few flat areas like Echo Park Lake.

Echo Park is flanked by Elysian Valley to the north and northeast, Elysian Park to the east, Chinatown and Downtown to the southeast, Westlake to the southwest and west, and Silver Lake to the northwest. [12] [13]

Boundaries are the Golden State Freeway– Glendale Freeway interchange at the north apex, Riverside Drive on the northeast, Elysian Park on the east, Stadium Way and Beaudry Avenue on the southeast, the south apex being Beaudry Avenue and West Second Street and the west limit being an irregular line consisting of Second Street and Beverly Blvd, then moving upward north along Benton Way and the Glendale Freeway. [12] [14] [15]

Within Echo Park are the following:

Angelino Heights is most notable for its Victorian era residences, although these are few in number. It lies at an elevation of 502

Since the 1910s, Elysian Heights, along with Edendale, has been home to many of the counter-culture, political radicals, artists, writers, architects and filmmakers. The children of many progressives attended school there during the 1930s, '40s and '50s.

Victor Heights lies between Chinatown, Los Angeles, and the central part of Echo Park, off Sunset Boulevard near the Pasadena Freeway below Elysian Park. One of its streets is the hilly Figueroa Terrace, where in 1992 a resident named Betty Oyama lived and helped popularized a name for Victor Heights as the "Forgotten Edge," because, as she said, the Police Department couldn't figure out where Victor Heights was exactly. In a feature story about Oyama's successful fight to form a Neighborhood Watch, a Los Angeles Times reporter said of Victor Heights that it was "a mix of new and old housing styles and [of] residents who span the socioeconomic and ethnic spectrums. New condominium complexes stand next to 1920s-era bungalow houses and old apartment buildings." [16]

In 2009 Victor Heights and its hilly streets were described as "a collection of stuccoed apartments and faded bungalows, a place with a lot of old-timers." With its dramatic views of the Los Angeles Civic Center, Victor Heights had a population of "older Italians and Croatians who once dominated the area," along with "newer Asian and Latino immigrants [and] a smattering of hipsters betting that Victor Heights will be the next big thing." The area became known for the flock of peacocks and peahens, with their chicks, who had taken over parts of the district, often on Everett Street, where they gathered in the morning. [17]

Victor Heights is an old area. In 1887 "Choice lots, commanding a splendid view," were being advertised for $1,200. Lesser lots went for $700 to $1,300. All had "Water piped through the street." [18] In 1908 its residents took a fight against disruptive dynamite blasting by the Los Angeles Brick Company in Chavez Ravine to the Los Angeles City Police Commission. They complained that the explosions were "cracking the plaster on their walls and causing their homes to settle to such an extent that they could not open their doors. [19]

The 2000 U.S. census counted 40,455 residents in the 2.4-square-mile neighborhood—an average of 16,868 people per square mile, one of the highest densities in Los Angeles and among the highest densities for the county. In 2008 the city estimated that the population had increased to 43,832. The median age for residents was 30, about the same as the city norm. [14]

The median household income in 2008 dollars was $37,708, a low figure for Los Angeles, and a high percentage of households earned $20,000 or less. The average household size of three people was about the same as the rest of the city. Renters occupied 76% of the housing units, and house- or apartment owners the rest. [14]

Census data below for Echo Park is generally cited from only US Census District 1974.20 and does not include a large portion of what is geographically and culturally considered Echo Park. District boundaries shifted from 2000 to 2010 in most of the other contributing districts, so trends are not necessarily reliably reported by the data. It is also alleged that Echo Park and Hollywood are among the lowest responding areas to census polls.

The park is one of largest in Los Angeles at 600 acres (2.4 km²). It is also the city's oldest park, founded in 1886 by the Elysian Park Enabling Ordinance. Most of Elysian Park falls in the Eastern neighborhood of the same name, but a small portion of the park does fall in Echo Park.

Echo Park, with the Downtown Los Angeles skyline in the background

Originally built in the 1860s as a reservoir for drinking water. Today Echo Park Lake is a Los Angeles icon that functions primarily as a detention basin in the City’s storm drain system, while providing recreational benefits and wildlife habitat. Echo Park Lake also plays host to community events, such as the annual Lotus Festival every July. [21] 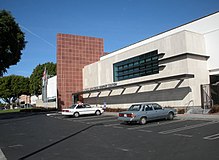 The Los Angeles Fire Department Station 20 is in the area. [26]

Mitch O'Farrell is an American politician and member of the Los Angeles City Council representing the 13th district, including Echo Park. O'Farrell was elected on May 21, 2013 to succeed outgoing incumbent Eric Garcetti, the 42nd Mayor of Los Angeles. His office resides at 1722 Sunset Blvd. in Downtown Echo Park. [27]

Eighteen percent of residents 25 and older have a four-year degree, about average for the city and the county, but there is a high percentage of residents with less than a high school diploma. [14]

Within Echo Park are the following schools: [32]

The trendy Echo Park area, known as one of "the city's hippest neighborhoods", has many bars, night clubs, and restaurants. [34]