From Wikipedia, the free encyclopedia
For the park and the location of the La Brea Tar Pits, see Hancock Park.
Neighborhood of Los Angeles in California, United States

Hancock Park is a historic residential neighborhood in the central region of Los Angeles, California. Developed in the 1920s, the neighborhood features architecturally distinctive residences, many of which were constructed in the early 20th century.

The neighborhood is low density, with a 70.7% white, highly educated, older-aged population of 10,600+ people. There are four private and two public schools in the area.

Hancock Park was developed in the 1920s by the Hancock family with profits earned from oil drilling in the former Rancho La Brea. The area owes its name to developer-philanthropist George Allan Hancock, who subdivided the property in the 1920s. [1] [2] Hancock, born and raised in a home at what is now the La Brea tar pits, inherited 4,400 acres (18 km2), which his father, Major Henry Hancock had acquired from the Rancho La Brea property owned by the family of Jose Jorge Rocha. [3]

As of 2007, the Hancock Park homeowners association counted about 1,200 homes within the boundaries of Melrose Avenue, Wilshire Boulevard, and both sides of Highland and Rossmore avenues. [6]

The Mapping L.A. project of the Los Angeles Times, which defines neighborhoods by merging together neighboring census tracts, has Hancock Park flanked by Hollywood to the north, Larchmont and Windsor Square to the east, Koreatown to the southeast, Mid-Wilshire to the south and southwest and Fairfax to the west. [7] Mapping L.A. street boundaries are Melrose Avenue on the north, Arden Boulevard on the east, Wilshire Boulevard on the south and La Brea Avenue on the west, thus engulfing the neighborhoods of Citrus Square, La Brea–Hancock, and a portion of Melrose, which are not served by the Hancock Park Homeowners Association. [4] [5]

The neighborhood surrounds the grounds of the Wilshire Country Club. [8] [9] 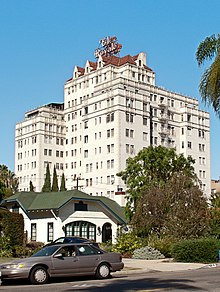 The 2000 U.S. census counted 9,804 residents in the 1.59-square-mile neighborhood—an average of 6,459 people per square mile, including the expanse of the Wilshire Country Club. That figure gave Hancock Park one of the lowest densities in Los Angeles. In 2008, the city estimated that the population had increased to 10,671. The median age for residents was 37, considered old when compared with the city as a whole; the percentages of residents aged 35 and above were among the county's highest. [8]

Hancock Park was moderately diverse ethnically. The breakdown was whites, 70.7%; Asians, 13.1%; Latinos, 8.5%; blacks, 3.8%, and others, 3.9%. Korea and the Philippines were the most common places of birth for the 26.3% of the residents who were born abroad, a figure that was considered low compared to rest of the city. [8]

The median yearly household income in 2008 dollars was $85,277, a relatively high figure for Los Angeles, and a high percentage of households earned $125,000 or more. The average household size of 2.1 people was low for the city of Los Angeles. Renters occupied 52.7% of the housing units, and house- or apartment owners 47.3%. [8]

See also: History of the Jews in Los Angeles

Hancock Park has a population of Orthodox Jews. According to Teresa Watanabe of the Los Angeles Times, there are no clear figures but in the mid-aughts the Jewish Journal estimated that Orthodox Jews made up 20% of the neighborhood's total population." [6] Hancock Park is home to nearly all subsections of Orthodox Judaism; of particular note is the large population of Chasidic Jews. The Chasidic Jewish population is growing at an above-average rate due to high birth rates within the community. [10] Orthodox Jews are required to be in walking distance to their synagogues, and Hancock Park is in walking distance to the La Brea Avenue-area synagogues. Teresa Watanabe stated some Orthodox families cited the large size of houses as a reason for moving there, others cited a better housing value compared to Beverly Hills, and other cited a proximity to the Yavneh Hebrew Academy. As of 2007 there were six Jews on the 16-member board of directors of the Hancock Park Homeowners Association. [6] As of 2007 the number of Orthodox Jews in Hancock Park is increasing. As of that year there had been disputes between Orthodox Jews and their neighbors. [11] 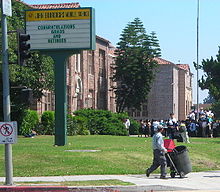 Hancock Park residents were considered highly educated, 56.2% of those aged 25 and older having earned a four-year degree. The percentage of residents with a master's degree was high for the county. [8]

The schools operating within the Hancock Park borders are: [12]

Many residences of consuls general are within Hancock Park. [6]

Since 1957, the residence of the British Consul General in Los Angeles has been in a home designed by the renowned architect Wallace Neff and completed in 1928. The residence, located at the Hancock Park address of 450 S. June St., Los Angeles, CA 90020, is where Prince William, Duke of Cambridge, and Catherine, Duchess of Cambridge, stayed in July 2011 on their first visit to the United States after their wedding. [13] [14] [15]