From Wikipedia, the free encyclopedia
Governing body of the City of Los Angeles, CA, US

The Los Angeles City Council is the governing body of the City of Los Angeles.

The council is composed of 15 members elected from single-member districts for four-year terms. [1] The president of the council and the president pro tempore are chosen by the council at the first regular meeting of the term (after June 30 in odd-numbered years until 2017 and the second Monday of December in even-numbered years beginning in 2020). An assistant president pro tempore is appointed by the President. As of 2015, council members receive an annual salary of $184,610 per year, which is among the highest city council salary in the nation. [2]

Regular council meetings are held in the City Hall on Tuesdays, Wednesdays and Fridays at 10 am except on holidays or if decided by special resolution. [3]

A current annual (July to June) schedule of all Council meetings, broken down by committee, is available as a .pdf download from the Office of the City Clerk. 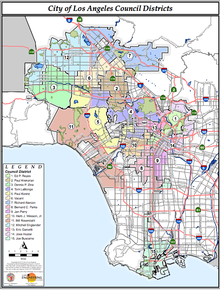 Los Angeles was governed by a seven-member Common Council under general state law from 1850 to 1889, when a city charter was put into effect.

Under the first charter of the city, granted by the Legislature in 1889, the city was divided into nine wards, with a councilman elected from each one by plurality vote. The first election under that system was held on February 21, 1889, and the last on December 4, 1906.

Two-year terms for the City Council began and ended in December, except for the first term, which started in February 1889 and ended in December 1890. The term of office was lengthened to three years effective with the municipal election of December 4, 1906, which was the last year this ward system was in use.

Between 1909 and 1925, the council was composed of nine members elected at large in a first-past-the-post voting system. Council membership in those years was as follows: