From Wikipedia, the free encyclopedia
Provides fire and emergency medical services to the City and County of San Francisco, California.

Volunteer companies were first formed in the city in 1850, and a paid staff established in 1866. In 1906, the department was considered on a par with those of the larger cities on the East Coast, but found itself reduced to fighting the fire of 1906 in the quake aftermath with axes and shovels, as most of the city's water mains were broken and cisterns drained. Fire Chief Dennis T. Sullivan suffered mortal wounds in his home by a falling chimney early in the disaster and subsequently died in the hospital. 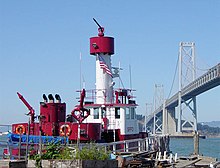 Fireboat Guardian stands on alert status near the Bay Bridge. 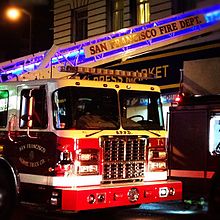 SFFD Truck 3 operating at a fire in the Tenderloin. 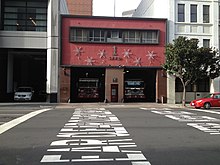 Two SFFD truck companies at the scene of a 4th-alarm fire on 41st Ave. in the Sunset District

Below is a full listing of all fire station and company locations in the City & County of San Francisco according to division and battalion. [10]

All apparatus at SFO go by the 'Rescue' call sign, whether Engine, Truck, ARFF Crash, Medic Unit, or Command SUV.

Throughout the history of the San Francisco Fire Department there have been several fire companies which have been closed due to budget cuts and the restructuring of engine company numbers in 1972–1973.