Since the establishment of the United States in 1776, numerous state partition proposals have been put forward that would partition an existing state (or states) in order that a particular region within might either join another state, or create a new state. Article IV, Section 3, Clause 1 of the United States Constitution, oftentimes called the New States Clause, grants to the United States Congress the authority to admit new states into the United States beyond the thirteen already in existence at the time the Constitution went into effect (June 21, 1788, after ratification by nine of the thirteen states). [1] It also includes a stipulation originally designed to give Eastern states that still had Western land claims (then including Virginia, North Carolina, and Georgia) a veto over whether their western counties could become states. [2]

New States may be admitted by the Congress into this Union; but no new State shall be formed or erected within the Jurisdiction of any other State; nor any State be formed by the Junction of two or more States, or Parts of States, without the Consent of the Legislatures of the States concerned as well as of the Congress. [3]

The clause has served this same function since then whenever a proposal to partition an existing state or states has come before Congress. New breakaway states are permitted to join the Union, but only with the proper consents. [4] Of the 37 states admitted to the Union by Congress, three were set off from an already existing state:

Another state that may fit into this category is Vermont, which existed as a de facto but unrecognized sovereign state from 1777 until 1791. The region had been a subject of a territorial dispute between New York and New Hampshire during the colonial period, which royal authorities had resolved in favor of New York; as the State of New York continued to claim Vermont's territory under this ruling after independence, the Continental Congress never recognized Vermont as an independent state. In 1790, after negotiating the common boundary between the two states, and after Vermont agreed to pay New York $30,000 New York relinquished its land-grant claim and consented to Vermont becoming part of the Union. Vasan Kesavan and Michael Stokes Paulsen assert that, "although Vermont was admitted into the Union with New York's consent, it is not at all clear that New York's consent was constitutionally necessary. While Vermont was within the territory claimed by New York, the preponderance of evidence suggests that Vermont was not within the jurisdiction of New York." [4]

The following is a list of substantive proposals (both successful and unsuccessful) put forward since the nation's founding to partition or set-off a portion of an existing U.S. state (or states) in order that the region might either join another state or create a new state. Proposals to secede from the Union are not included, nor are proposals to create states from either organized incorporated or unorganized U.S. territories. Land cessions made by several individual states to the Federal government during the 18th and 19th centuries are not listed either. 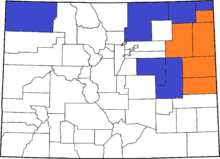 2013 election results: counties in orange voted to separate from Colorado, while counties in blue rejected the idea. 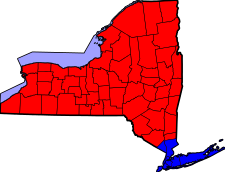