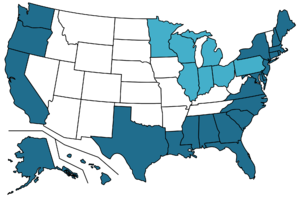 Two separate measurements are used: method 1 only includes states with ocean coastline and excludes tidal inlets; method 2 includes Great Lake shoreline and the extra length from tidal inlets. For example, method 2 counts the Great Bay as part of New Hampshire's coastline, but method 1 does not.

Method 1 does not include the coastlines of the territories of the United States, while method 2 does.

The data for method 1 was retrieved from a CRS Report for Congress [1] using data from U.S. Department of Commerce, National Oceanic and Atmospheric Administration, The Coastline of the United States, 1975. [2] This is based on measurements made using large-scale nautical charts. The figure for Connecticut was arrived at separately and may not reflect the correct comparative distance. These numbers exclude the Great Lakes coastlines.

The data for method 2 is from a list maintained by the Office of Ocean and Coastal Resource Management of the National Oceanic and Atmospheric Administration (NOAA). [note 1] The state coastline lengths were computed by an unspecified method that includes tidal areas not included in the first method. [3] These numbers also include the Great Lakes coastlines, which do not have similar tidal areas. Data for the U.S. Minor Outlying Islands is from the CIA World Factbook. [4] [5] [6]

The figures also face the ambiguity inherent in all attempts at measuring coastlines, as expressed in the coastline paradox.