Speed limits in the United States

From Wikipedia, the free encyclopedia
Overview of the speed limits on roads in the United States

Map of highest posted speed limits in the U.S. territories

Speed limits in the United States are set by each state or territory. States have also allowed counties and municipalities to enact typically lower limits. Highway speed limits can range from an urban low of 20 mph (32 km/h) to a rural high of 85 mph (137 km/h). Speed limits are typically posted in increments of five miles per hour (8 km/h). Some states have lower limits for trucks and at night, and occasionally there are minimum speed limits.

Speed limit sign at a school zone with a warning light

This table contains the most usual posted daytime speed limits, in miles per hour, on typical roads in each category. The values shown are not necessarily the fastest or slowest. They usually indicate, but not always, statutory speed limits. Some states and territories have lower truck speed limits applicable to heavy trucks. If present, they are usually only on freeways or other high-speed roadways. Washington allows for speeds up to 75 mph (121 km/h), but the highest posted signs are 70 mph (110 km/h). Mississippi allows speeds up to 80 mph (129 km/h) on toll roads, but no such roads exist.

Further information: Speed limits in the United States by jurisdiction

One of the first speed limits in what would become the United States (at the time, still a British colony) was set in Boston in 1701 by the board of selectmen (similar to a city council):

Ordered, That no person whatsoever Shall at any time hereafter ride or drive a gallop or other extream pace within any of the Streets, lanes, or alleys in this Town on penalty of forfeiting three Shillings for every such offence, and it may be lawfull for any of the Inhabitants of this Town to make Stop of such horse or Rider untill the name of the offender be known in order to prosecution [84]

In response to the 1973 oil crisis, Congress enacted the National Maximum Speed Law that created the universal 55 miles per hour (89 km/h) speed limit. States had to agree to the limit if they desired to receive federal funding for highway repair. The federal government enforced the national maximum speed limit by withholding federal funding for projects whose speed limits exceeded 55 miles per hour (89 km/h). Federal highway funding is normally allocated according to 23 U.S. Code § 106, [85] the National Maximum Speed Law (also known as H.R.11372 - An Act to conserve energy on the Nation's highways) modified the allocation process. As stated, in part:

...the Secretary of Transportation shall not approve any project under section 106 of title 23 of the United States Code in any State which has...a maximum speed limit on any public highway within its jurisdiction in excess of 55 miles per hour... [86]

Whether the lowered speed limits reduced gasoline consumption or not has been debated, and the impact on safety is unclear; studies and opinions of safety advocates are mixed.[ citation needed] In 1984, a comprehensive study by the National Research Council found that the lower speed limits contributed to saving 3,000 to 5,000 lives in 1974 and from 2,000 to 4,000 lives each year thereafter, due to slower and more uniform speeds on American highways. [87] Furthermore, in April 2019, the Insurance Institute for Highway Safety (IIHS) confirmed the increase of speed limits not only increases the speed of vehicles but can also generate additional deaths: "A 5 mph increase in the maximum state speed limit was associated with an 8.5% increase in fatality rates on interstates/freeways and a 2.8% increase on other roads." [88] But[ clarification needed] statistical records of motor vehicle fatalities since the repeal of the 55 miles per hour (89 km/h) National Maximum Speed Limit in 1995 indicate that total traffic deaths in the United States have declined from 41,817 that year to 32,479 in 2011, the lowest level in 60 years, before increasing to 37,133 in 2017. [89]

The law was widely disregarded by motorists, even after the national maximum was increased to 65 mph (105 km/h) on certain roads in 1987 and 1988. In 1995, the law was repealed by the National Highway System Designation Act of 1995, returning the choice of speed limit to each state. [90]

Upon that repeal, there was effectively no speed limit on Montana's highways for daytime driving (the nighttime limit was set at 65 miles per hour (105 km/h)) from 1995 to 1999, when the state Supreme Court threw out the law as "unconstitutionally vague." [91] The state legislature enacted a 75 miles per hour (121 km/h) daytime limit in May 1999. [92] Overall, the new speed limit law in Montana was found to be satisfactory to residents of the state. [93]

Comparable to the common basic speed rule, most jurisdictions also have laws prohibiting speeds so low they are dangerous or impede the normal and reasonable flow of traffic.

Some jurisdictions set lower speed limits that are applicable only to large commercial vehicles like heavy trucks and buses. While they are called "truck speed limits", they generally do not apply to light trucks.

A 1987 study said that crash involvement significantly increases when trucks drive much slower than passenger vehicles, suggesting that the difference in speed between passenger vehicles and slower trucks could cause crashes that otherwise may not happen. [94] In a review of available research, the Transportation Research Board said "[no] conclusive evidence could be found to support or reject the use of differential speed limits for passenger cars and heavy trucks" and "a strong case cannot be made on empirical grounds in support of or in opposition to differential speed limits". [95]:11:109 Another study said that two thirds (67%) of truck/passenger car crashes are the fault of the passenger vehicle. [96]

Night speed limit sign in the Key Deer habitat on the Florida Keys has nonreflective backing for day speed limit number so that at night, headlights make only the number on the lower sign visible

The basic speed rule requires drivers adjust speeds to the conditions. This is usually relied upon to regulate proper night speed reductions, if required. Numeric night speed limits, which generally begin 30 minutes after sunset and end 30 minutes before sunrise, are occasionally used where, in theory, safety problems require a speed lower than what is self-selected by drivers.

Traffic violations can be a lucrative income source for jurisdictions and insurance companies. For example:

Thus, an authority that sets and enforces speed limits, such as a state government, regulates and taxes insurance companies, who also gain revenue from speeding enforcement. Furthermore, such an authority often requires "all" drivers to have policies with those same companies, solidifying the association between the state and auto insurers. If a driver cannot be covered under an insurance policy because of high risk, the state will assume that high risk for a greater monetary amount; thus resulting in even more revenue generation for the state. [104]

When a speed limit is used to generate revenue but has no safety justification, it is called a speed trap. The town of New Rome, Ohio was such a speed trap, where speeding tickets raised up to $400,000 per year to fund the police department of a 12-acre village with 60 residents. [105]

Either of the following qualifies a crash as speed-related in accordance with U.S. government rules: [106]

Speeds in excess of speed limits account for most speed-related traffic citations; generally, "driving too fast for conditions" tickets are issued only after an incident where the ticket issuer found tangible evidence of unreasonable speed, such as a crash. Driving too fast for conditions is sometimes cited when a motorist is caught exceeding the posted speed limit, but the speed falls below a state's "default" speed limit codified in law. This makes it difficult for the motorist to get out of a ticket by claiming the speed at which he or she was travelling was within the state's legal speed limit, despite the lower posted speed limit for which the motorist may or may not have been aware of.

A criticism of the "exceeding speed limits" definition of speeding is twofold:

Most states have absolute speed limits, meaning that a speed in excess of the limit is illegal per se. However, some states have prima facie speed limits. [110] This allows motorists to defend against a speeding charge if it can be proven that the speed was in fact reasonable and prudent. 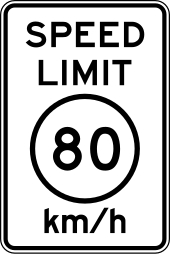 Values of metric speed limits in the US were inside circles

Metric speed limits are no longer included in the Federal Highway Administration's Manual on Uniform Traffic Control Devices (MUTCD), which provides guidelines for speed limit signage, [114] and therefore, new installations are not legal in the United States. Prior to 2009, a speed limit could be defined in kilometers per hour (km/h) as well as miles per hour (mph). The 2003 version of the MUTCD stated that "speed limits shown shall be in multiples of 10 km/h or 5 mph." [115] If a speed limit sign indicated km/h, the number was circumscribed and "km/h" was written below. Prior to 2003, metric speed limits were designated using the standard speed limit sign, usually with yellow supplemental "METRIC" and "km/h" plaques above it and below it, respectively. [116] [117]