The Gini coefficient is a measure of inequality of incomes (or sometimes wealth) across individuals.

The information was tabulated in 2010 from data from the American Community Survey conducted by the US Census Bureau. Utah, Alaska, New Hampshire, and Wyoming show the smallest income disparities while the District of Columbia, New York State, Louisiana, and Connecticut have the largest disparities in income between wage earners in all income categories. [1]

In 2010 U.S. income inequality was at its highest level since the United States Census Bureau began tracking household income in 1967. [2] The U.S. also has the greatest disparity among western industrialized nations. [1]

List of U.S. states by Gini coefficient of income inequality 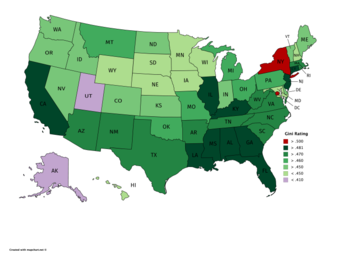 A Map of the US by Gini coefficient.
Legend:

The list goes from the lowest Gini coefficient to the highest.