Flags of the U.S. states and territories 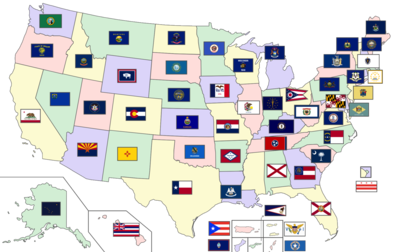 Map showing the current flags of 49 U.S. states, the District of Columbia, and the 5 major U.S. territories. The Mississippi state legislature voted on June 28, 2020, to replace their flag with one that does not include the Confederate battle flag emblem and will officially remain without a flag until a design is approved via ballot measure. [1]

The flags of the U.S. states, territories, and the District of Columbia exhibit a variety of regional influences and local histories, as well as different styles and design principles. Nonetheless, the majority of the states' flags share the same design pattern consisting of the state seal superimposed on a monochrome background, commonly a shade of blue.

The most recently adopted state flag is the Flag of Utah, which was updated on February 16, 2011 to fix incorrectly located text. [2] The most recently adopted territorial flag is that of the Northern Mariana Islands, and was adopted on July 1, 1985. Mississippi has not had an official state flag since retiring its former flag on June 30, 2020. [3]

Modern U.S. state flags as contemporarily understood date from the turn of the 20th century, when states wanted to have distinctive symbols at the 1893 World's Columbian Exposition in Chicago, Illinois. Most U.S. state flags were designed and adopted between 1893 and World War I. [4]

According to a 2001 survey by the North American Vexillological Association, New Mexico has the best-designed flag of any U.S. state, U.S. territory, or Canadian province, while Georgia's state flag was rated the worst design [5] (Georgia adopted a new flag in 2003; Nebraska's state flag, whose design was rated second worst, remains in use to date).

Dates in parentheses denote when the current flag was adopted by the several states. Additionally, Mississippi currently has no official state flag, after the retirement of its previous flag on June 30, 2020. [a]

This is the current flag of the District of Columbia.

These are the current official flags of the five permanently-inhabited territories of the United States. Dates in parenthesis denote when the territory's current flag was adopted by its respective political body.

Maine and Massachusetts have ensigns for use at sea.

See also: Flags of the Confederate States of America

Further information: Flags of Native Americans in the United States on Wikimedia Commons

This is the former unofficial flag of Palmyra Atoll.