List of U.S. states and territories by educational attainment

This is a list of U.S. states and territories by educational attainment. This article presents a list of the 50 U.S. states, the District of Columbia, and the 5 inhabited territories of the United States sorted by educational attainment for persons 25 years of age and older. The list is based on the responses to the 2013-2017 American Community Survey for the 50 states, District of Columbia and Puerto Rico, [1] and based on the 2010 U.S. Census for the other 4 U.S. territories (the latest data available for those 4 territories). [2] [note 1] Educational attainment is lower in the U.S. territories than it is in the states and the District of Columbia. The American Community Survey is a large demographic survey collected throughout the year using mailed questionnaires, telephone interviews, and visits from Census Bureau field representatives to about 3.5 million household addresses annually, regardless of their legal immigration status. The survey does not measure graduation rates from a state's high schools, rather, it measures the percentage of adult residents with a high school diploma. A 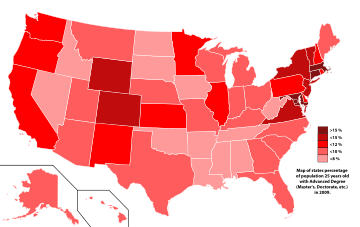 Map of states percentage of population 25 years old with Advanced Degree in 2009. Territories of the United States are not on the map. 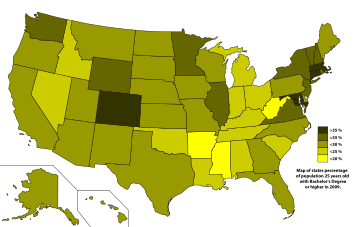 Map of states percentage of population 25 years old with bachelor's degree or Higher in 2009. Territories of the United States are not on the map.