Speakers of Pennsylvania Dutch by state 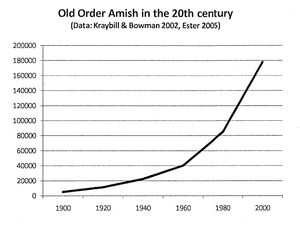 In 2014 there were 31 states of the United States that had a significant Amish population. Following are populations by state per the results.

The data for 2010 are from "Amish Studies - The Young Center". [3] The 2010 census of Amish population was published in 2012, compiled by Elizabeth Cooksey, professor of sociology, and Cory Anderson, a graduate student in rural sociology, both at The Ohio State University. [4] It was commissioned by the Association of Statisticians of American Religious Bodies for the 2010 U.S. Religion Census (published in 2012). [4] [5]

The percentage of the state's population is from a 2015 estimate. [7]

According to Albrecht Powell, the Pennsylvania Amish are not the largest group of U.S. Amish as is commonly thought. The Amish have settled in as many as 31 states and Canada, and Central America, though about 63% are located in Pennsylvania, Ohio and Indiana. The greatest concentration of Amish is in Holmes and adjoining counties in northeast Ohio, about 78 miles south of Cleveland. Next in size is a group of Amish people in Elkhart and surrounding counties in northeastern Indiana. Then comes the Amish settlement in Lancaster County, Pennsylvania. The Amish population in the U.S. numbers more than 270,000 and is growing rapidly, due to large family size (seven children on average) and a church-member retention rate of approximately 80%." [8]