From Wikipedia, the free encyclopedia
US Air Force base at Warner Robins, Georgia, United States

Robins Air Force Base ( IATA: WRB, ICAO: KWRB) is a major United States Air Force installation located in Houston County, Georgia, United States. The base is located just east of and adjacent to the city of Warner Robins, 18 mi (29 km) south-southeast of Macon and approximately 100 mi (160 km) south-southeast of Atlanta, Georgia. The base is named in honor of Brig Gen Augustine Warner Robins, the Air Force's "father of logistics". [2]

The host unit at Robins AFB is the 78th Air Base Wing (78 ABW) which provides services and support for the Warner-Robins Air Logistics Complex and its tenant organizations. The Wing and Installation Commander of Robins Air Force Base is Colonel Brian R. Moore. [4] The Wing Vice Commander is Colonel Katrina C. Stephens. [5] 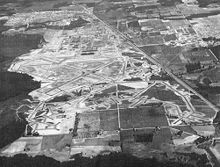 The War Department, in search of a site for an Army Air Corps Depot, selected the sleepy whistle-stop town known as Wellston, Georgia, 18 miles south of Macon. Army Colonel Charles Thomas, originally from Atlanta, landed at the Herbert Smart Airport near Camp Wheeler near Macon in October 1941 to oversee the building of the location which would later become the home to Wellston Air Depot at Robins Field (later to become Robins AFB). [6]

It was Col. Thomas who chose the name "Robins" for his mentor Brig. Gen. Augustine Warner Robins. Brig. Gen. Robins is considered the 'father of logistics' for his system of cataloging supplies and materials. He had a lengthy military career prior to becoming the chief of the Air Corps Materiel Division. Robins traveled in China disguised as a millionaire tourist, collecting intelligence for the Army. He also went to Mexico where he served under Gen. John J. Pershing in the Army's campaign against Pancho Villa. He trained during World War I to become a pilot earning his wings in June 1918. He didn't get to see combat because the war was ending. Robins suffered a near-fatal plane crash in 1921 in which his jaw and arm were severely broken. Brig. Gen. Robins died of a heart attack on Father's Day, 16 June 1940 at Randolph Field, Texas, while he was Commandant of the Air Corps Training Center. [6] 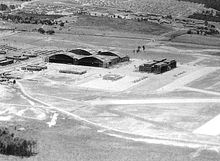 After World War II, when the Air Force closed down its maintenance depots at the former Brookley AFB in Mobile, Alabama and the former Olmsted AFB in Middleton Township, Pennsylvania, Robins AFB assumed the workload of these depots. Some Robins AFB SAC units went to Guam or Vietnam during the Vietnam War and took part in many of the bombing missions. Maintenance teams from Robins frequently traveled to Southeast Asia to repair severely damaged aircraft. Robins AFB eventually managed the Lockheed C-141, C-7, and the F-15 Eagle as well as modifying the C-130s to the gunship configuration.

Robins played a key role in the Vietnam War (1964–73), supplying troops and materiel through the Southeast Asian Pipeline and modifying AC-119G/K and AC-130 gunships. Also playing a role were the C-141, the C-130, the C-123, and the C-124 cargo aircraft—all maintained at Robins. In 1973 these same C-141s supported the resupply of Israel in the Yom Kippur War. In October 1983, C-130s from Robins supported U.S. forces in the invasion of Grenada.

Between 1977 and 1981, Robins was the air base used by former President Jimmy Carter during his tenure on visits to his hometown of Plains. SAC's B-52s left Robins in 1983 leaving the 19th Wing as the sole SAC unit on the base with its KC-135s.

In 1990–91, during the Persian Gulf War, Robins provided record numbers of parts, repairs, and personnel to coalition forces in the Persian Gulf. Robins-maintained F-15 Eagles and the E-8 Joint STARS played key roles in defeating the Iraqi military powers. In March–June 1999, during Operation Allied Force, the same employees and weapon systems played a decisive role in defeating the forces of the Yugoslavian president Slobodan Milosevic.

In 1996, the Georgia Air National Guard's 116th Fighter Wing at Dobbins AFB relinquished their F-15 aircraft and moved to Robins, transitioning to B-1 Lancer bombers and being redesignated as the 116th Bomb Wing. That same year, the former 93rd Bomb Wing at Robins was reactivated as the 93rd Air Control Wing with the E-8 Joint STARS aircraft. In 2001, the B-1 bombers left Robins AFB and the Georgia Air National Guard entered into a merged Active-Guard "associate" wing arrangement in the Joint STARS mission with the active Air Force, with the Air National Guard holding lead responsibility as the 116th Air Control Wing.

The Warner Robins Air Logistic Complex and Robins AFB form the largest single industrial complex in the State of Georgia. The 23,000 civilian employees have an annual payroll over $1 billion. The Logistic Complex manages and overhauls the F-15, C-5 Galaxy, C-130 Hercules, and the AC-130 gunships—and all of the Air Force's helicopters. In addition, the Complex also supports the C-17 Globemaster III and U-2 aircraft.

Until June 2008, Robins was also the home of the KC-135s of the 19th Air Refueling Group, when the unit was inactivated, then reactivated a month later as the 19th Airlift Wing at Little Rock AFB, Arkansas. The E-8s of the 116th Air Control Wing continues to operate at Robins as a combined Regular Air Force and Georgia Air National Guard air control wing, and the headquarters of the Air Force Reserve Command is also located on the base. The metropolis of Warner Robins, Georgia has grown in proportion to become the sixth largest city in Georgia.

On April 1, 2016, an EF-1 tornado ripped through the northeast corner of Centerville and continued over Robins Air Force Base, ripping off hangar roofs. 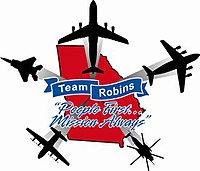 The wing provides weapon system logistics support, oversees unscheduled and programmed depot maintenance, and manages modification efforts for the Air Force's fleet of C-5, C-130, C-17, F-15, U-2, and E-8C Joint STARS aircraft, Global Hawk,Distributed Common Ground System (DCGS), MC-130, HC-130 and various special operations combat search and rescue aircraft and helicopters to include AC-130H/U,MC-130E/H/P/J, EC-130J, MH-53J/M, HH-60G, UH-1N,TH-1H, and HC-130P/N/J. In addition the wing is the engineering authority for all the aircraft above except for Boeing C-17A, RQ-4A/B Global Hawk, and E-8C.

Units marked GSU are Geographically Separate Units, which although based at Robins, are subordinate to a parent unit based at another location.

Near the base is the Museum of Aviation, [10] begun in 1981, has four major structures on forty-three acres and ninety historic aircraft. The museum is also home to the Georgia Aviation Hall of Fame which honors outstanding Georgians prominent in aviation.

The 93 aircraft and missiles on display include a B-52, SR-71, a Marietta, Georgia-built B-29, and a specially modified C-130 Hercules that was used in Operation Eagle Claw the failed Iran-hostage rescue mission.

It has become a major regional educational and historical resource that hosts more than 500,000 visitors annually.

The base is located in northeastern Houston County, bordered to the west by the city of Warner Robins. The Ocmulgee River is to the east. It is 17 miles (27 km) south of Macon.

President George W. Bush hugs a trick-or-treater Tuesday, 31 October 2006, during a Halloween visit to a housing development on base.

The base is the single largest industrial complex in Georgia, employing a workforce of over 25,584 civilian, contractor, and military members. [11]

72.3% of the households had children under the age of 18 living with them, 75.3% were headed by married couples living together, 7.4% had a female householder with no husband present, and 12.1% were non-families. 11.7% of all households were made up of individuals, and none had someone living alone who was 65 years of age or older. The average household size was 3.33, and the average family size was 3.62. [13]

As with the adjacent city of Warner Robins, tornadoes have continually plagued the base since its inception with the 1950s seeing at least two catastrophic tornadoes strike the area. The first one occurred on April 30, 1953, when an F4 tornado with winds of over 200 mph hit the base, killing 18 people and injuring 300 more. [15] [16] Just ten months later on March 13, 1954, a long-tracked F1 tornado struck the base, killing one and injuring five. [17] To date, at least seven tornadoes have hit the base and the surrounding area. [18]