From Wikipedia, the free encyclopedia
This article is about Decatur, county seat of DeKalb County. For the county also located in the U.S. state of Georgia, see Decatur County, Georgia.
City in Georgia, United States

Decatur is a city in, and the county seat of, DeKalb County, Georgia, which is part of the Atlanta metropolitan area. With a population of 19,335 in the 2010 census, [4] the municipality is sometimes assumed to be larger since multiple ZIP Codes in unincorporated DeKalb County bear Decatur as the address. The city is served by three MARTA rail stations ( Decatur, East Lake, and Avondale). The city is located approximately 5 miles (8.0 km) northeast of Downtown Atlanta and shares its western border with both the city of Atlanta (the Kirkwood neighborhood) and unincorporated DeKalb County. The Druid Hills neighborhood is to the northwest of Decatur. The unofficial motto of Decatur used by some residents is "Everything is Greater in Decatur."

Decatur was established at the intersection of two Native American trails:  the Sandtown, which led east from the Chattahoochee River at Utoy Creek, and the Shallowford, which follows today's Clairmont Road, and eventually crossed near Roswell. It was named for United States Navy Commodore Stephen Decatur.

Shallowford Road, which led to the Shallow Ford, has been renamed Clairmont Avenue, probably because it does not go to, from or past any place called Clairmont. Covington Road is now Sycamore Street, probably because it leads to Covington and has no Sycamores on it. Nelson's Ferry Road, named after the local family which ran the ferry at the Chattahoochee end of the road, has been named Ponce de Leon after a family prominent, before Castro, in Havana, Cuba.

During the American Civil War, Decatur became a strategic site in Sherman's Atlanta Campaign. In July 1864, Major-General James McPherson occupied the town to cut off the Confederates' supply line from Augusta. On July 22, during the Battle of Atlanta, Confederate cavalry under Major-General Joseph Wheeler attacked McPherson's supply wagons and the Union troops left to defend the wagons. A historical marker at the old courthouse marks the site of this skirmish.

We attacked Decatur on the 22d and took the town driving out a Brigade of Infantry and a good deal of Dismounted Cavalry. Our Brigade really took the town, tho' it was supported on both flanks by a Brigade of Cavalry dismounted. The fight lasted about two hours and was very hot for a while. The Yankees had the hills and houses on us and fought very well for a time. Our dash was made to distract attention while Hardee made the real attack on the enemy's flank. We captured over a hundred prisoners and killed and wounded about one hundred and fifty. Our loss about seventy killed and wounded.

In the last half of the twentieth century the metropolitan area of Atlanta expanded into unincorporated DeKalb County, eventually surrounding two sides of the town of Decatur. Concurrently many well-to-do and middle class white Americans fled the area to more distant suburbs. The 1960s and 1970s witnessed dramatic drops in property values. However, more recently the city has regained economic vigor, partially thanks to several long-term downtown development plans that have come to fruition, making Decatur a trendy small mixed-use district with easy transit to downtown Atlanta. Over the past twenty years, it has gained a local and national reputation as a progressive city with a high level of citizen involvement that retains a small town feel despite its proximity to Atlanta.[ citation needed]

According to the United States Census Bureau, the city has a total area of 4.2 square miles (11 square kilometers), all land. 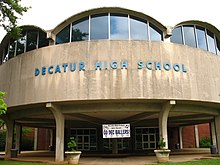 City Schools of Decatur, which serves only students within the city limits, holds pre-school to grade twelve, and consists of a pre-K early childhood learning center, five lower elementary schools, two upper elementary schools, a middle school, and a high school. [11] Decatur High School is the district's sole high school. The Decatur City district has 224 full-time teachers [12] and over 4,400 students from pre-K through grade 12. [13]

The Roman Catholic Archdiocese of Atlanta operates St. Thomas More School in Decatur; it opened on September 1, 1950. At first it only had elementary grades and its initial enrollment was 150. A dedicated elementary building opened in 1955, and an addition for kindergarten classes with two rooms was placed in 1994. [14] St. Peter Claver Regional School has a Decatur mailing address but is in nearby Candler-McAfee CDP. [15] [16]

Decatur has operated under a Commission-Manager form of government since 1920. The Charter of the City of Decatur establishes the City Commission as the governing and legislative authority of the City government. A five-member City Commission is elected for four-year terms on two-year cycles. Two members are elected from the south side of the city, two from the north side and one is elected at-large. At their organizational meeting each January, the Commissioners elect a mayor and mayor-pro-tem from among their own membership for a one-year term. The mayor is not a separate elected office. The current mayor is Patti Garrett. [23] Previous mayors have included Leslie Jasper Steele (1915), Jack Hamilton, Walter Drake, Mike Mears, Ann A. Crichton, Elizabeth Wilson, William Floyd, Jim Baskett and Scott Candler, Sr. (known as Mr. DeKalb).

The Commission appoints a professional City Manager to carry out the policies, directives and day-to-day business of the city. The current city manager is Andrea Arnold. [24] There are also several citizen volunteer boards and commissions appointed by the City Commission, including the Planning Commission, the Zoning Board of Appeals, and the Historic Preservation Commission.

Decatur has a thriving art and festival scene. The Decatur Arts Alliance hosts the Decatur Arts Festival each May, in addition to installing public art around the city, providing gallery space for local artists, producing YEA!, which is an event for young emerging artists, and supporting arts and arts education throughout the City.

Decatur holds the annual AJC Decatur Book Festival, which claims to be one of the largest independent book festivals in the United States. It has featured thousands of famous authors, book signings, speeches, and attracted upwards of 85,000 people in 2019. [29]

Decatur is home to Eddie's Attic, which is a live music venue hosting shows almost every night.

Decatur is known for its food scene and was named one of the South's "Tastiest Towns" in 2012. In 2016, the New York Times called it "Atlanta's gastronomic equivalent of Berkeley or Brooklyn". [30]

Noteworthy restaurants and establishments include:

Decatur has a growing beer scene with the award-winning Brick Store Pub, Wild Heaven Beer, and Three Taverns Brewery. The Decatur Craft Beer Festival was named one of the top ten beer festivals in the United States. [33] Decatur is also home to Independent Distilling Co. 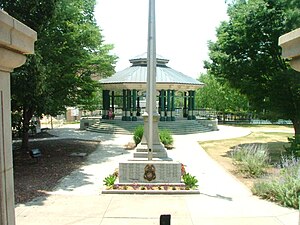 The Decatur Square gazebo from the old courthouse steps

Decatur's downtown area and residential neighborhoods are filled with historic structures and sites of interest. This list primarily consists of structures on the National Register of Historic Places, but many remain privately owned and may only be viewed from the exterior.