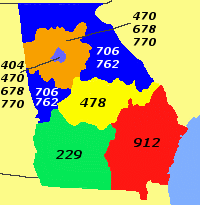 Area code 404 is a telephone area code in the North American Numbering Plan (NANP) for Atlanta, Georgia and its closest suburbs. This comprises roughly the area encircled by Interstate 285. It is an enclave area code, completely surrounded by area code 770, which serves most of Atlanta's suburbs. Both 404 and 770 are overlaid by area codes 678 and 470.

Area code 404 was created in 1947 as one the original numbering plan areas in North America, serving the entire state of Georgia. On July 1, 1954, the area from Macon southward was split off as area code 912. Area code 404 was reduced to the northern half of the state, from the Tennessee and North Carolina borders as far south as Columbus and Augusta.

Despite Atlanta's growth in the 1970s and 1980s, 404 remained unchanged for 38 years. However, by the end of the 1980s, 404 was on the brink of exhaustion. In an effort to delay splitting the area code, Southern Bell (later BellSouth, now part of AT&T Inc.) decided to introduce interchangeable central office codes, effective October, 1 1989. [1] Previously, the 404 numbering plan served 640 central offices. but the addition of interchangeable codes increased its capacity to 792 central offices in the numbering plan area. As a result, north Georgia telephone subscribers were forced to dial 1 plus the full ten-digit number (area code plus number).

By late 1991, the need for a new area code could no longer be staved off. On May 3, 1992, nearly all of the old 404 territory outside of metro Atlanta was split off with area code 706. [2] However, shortly after the split took effect, residents in several exurbs of Atlanta complained about no longer being associated with 404. As a result, BellSouth returned these areas to 404 in the spring of 1993. [3] The 404/706 boundary was redrawn in a way that left Columbus and its surrounding area cut off from the rest of 706, making 706 one of the few area codes that are not contiguous.

BellSouth and the Georgia Public Service Commission knew that 404 was still close to exhaustion even after the creation of 706 due to the growing proliferation of cell phones, fax machines and pagers. Indeed, the GPSC had anticipated that the Atlanta area would eventually need another area code, and had planned to assign 770 to Atlanta's suburbs later in the decade. However, the decision to return the Atlanta exurbs to 404 forced the GPSC to shift nearly all of Atlanta's suburban ring to 770 on August 1, 1995, sooner than had been planned.

The 404/770 boundary roughly follows Interstate 285, locally known as "the Perimeter." Generally, 404 is Atlanta itself and most suburbs inside the Perimeter (such as Decatur), while most of the metro area outside the Perimeter uses 770. The boundary was drawn in such a way that a number of areas are split between the two codes. For some time after the 770 split, 404 continued to be used for all cellphones in metro Atlanta. 404/770 became one of the six pairs of "doughnut area codes" in the numbering plan.

The 1995 split was intended as a long-term solution. However, within two years both 404 and 770 were close to exhaustion due to Atlanta's explosive growth and the continued proliferation of cellphones and pagers. On January 1, 1998, area code 678 was introduced as an overlay area code for 404 and 770. Since then, ten-digit dialing has been mandatory throughout metro Atlanta. Because the Federal Communications Commission would not allow an area code to apply only to cellphones, mobile customers throughout the metro area were given the option of choosing numbers in the 404, 770 and 678 area codes when signing up for service.

Within only two years, it was apparent that a fourth area code was needed for metro Atlanta. On September 2, 2001, area code 470 was overlaid on top of the 404, 770, and 678 area codes. When telephone numbers in area code 678 are exhausted, 470-numbers will be assigned. The number was chosen by the Georgia Public Service Commission and approved by the NANPA, as were the previous splits and overlays for new area codes in the state. This has the effect of allocating 31.2 million numbers to a metropolitan area of 6.4 million people.

Telephone numbers for high-capacity lines, such as for contest lines for radio stations, are assigned with the central office prefix 741. When 770 was split, these numbers continued to work as both 404-741-xxxx and as 770-741-xxxx, so that only seven-digit dialing was necessary. That lasted until 678 came into use. There are also other prefixes that are not assigned to just one exchange, such as 499 and 528 used by Cobb County government and formerly SPSU. These were completely moved into 770.

In November 2013, the NANPA announced the exhaustion of available number blocks for area code 404, citing significant population growth in Atlanta. [4]

The entire metro Atlanta region (404, 770, 678/470 and parts of 706/762) is a local calling area, one of the largest in the United States; no long-distance charges are applied for calls from one part of the region to the other.