In Midtown, the windows of a 1990s-era post-modern structure reflect a classical-style building

The architecture of Atlanta is marked by a confluence of classical, modernist, post-modernist, and contemporary architectural styles. Due to the complete destruction of Atlanta by fire in 1864, the city's architecture retains no traces of its Antebellum past. Instead, Atlanta's status as a largely post-modern American city is reflected in its architecture, as the city has often been the earliest, if not the first, to showcase new architectural concepts. However, Atlanta's embrace of modernism has translated into an ambivalence toward architectural preservation, resulting in the destruction of architectural masterpieces, including the Commercial-style Equitable Building (Atlanta's first skyscraper), the Beaux-Arts style Terminal Station, and the Classical Carnegie Library. The city's cultural icon, the Neo-Moorish Fox Theatre, would have met the same fate had it not been for a grassroots effort to save it in the mid-1970s. [1]

Because Atlanta was a settlement that grew from a planned railroad terminus and later a railroad junction, rather than being planned in a grand manner, its antebellum architecture was unremarkable compared to patrician Savannah or other older Southern cities. The town's most important buildings included Edward A. Vincent's Union Station (1853), the Atlanta, Trout House and Washington Hall hotels, and the Atlanta Bank. An 1859 industrial journal noted that: [2]

19 commodious brick stores were erected in 1858…besides a large number of fine residences, mostly of brick. Many of the new improvements are imposing structures, and would not suffer by comparison with the most elegant portions of our modern cities.

Not a single antebellum building from what was the town of Atlanta remains today. Remaining antebellum architecture inside the city limits consists of four houses that were well outside the city limits in the 19th century, as well as the Tullie Smith House which was moved to the Atlanta History Center from a location in North Druid Hills, an adjacent suburb. [3] The oldest building in Downtown Atlanta is the Georgia Railroad Freight Depot (1869). 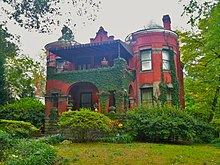 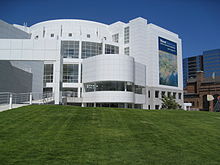 Most of Atlanta was burned during the Civil War, depleting the city of a large stock of its historic architecture. Yet Atlanta, architecturally, had never been particularly "southern." Because Atlanta originated as a railroad town, rather than a patrician southern seaport like Savannah or Charleston, many of the city's landmarks could have easily been erected in the Northeast or Midwest, [1] and indeed this was one reason why Atlanta referred to itself frequently as "the New York" or "the Chicago of the South." [4] [5] [6] [7]

Throughout the American Renaissance and beyond, Atlantans were amazed at successive waves of ever more impressive hotels, civic and industrial architecture, and office buildings, such as the Equitable Building (8 stories, 1892), Candler Building (17 stories, 1906), and Rhodes-Haverty Building (21 stories, 1929). Among the most notable architects active in Atlanta between the Civil War and World War Two were A. Ten Eyck Brown, Francis Palmer Smith and G. Lloyd Preacher.

During the Cold War era, Atlanta followed global modernist trends, especially with regards to office towers and commercial buildings. Examples of modernist architecture include the Westin Peachtree Plaza (1976), Georgia-Pacific Tower (1982), the State of Georgia Building (1966), and the Atlanta Marriott Marquis (1985).

The era's most notable architect may be Atlanta-native John Portman, whose Hyatt Regency Hotel (1968) made a significant mark on the hospitality sector. A graduate of Georgia Tech's College of Architecture, Portman's work reshaped downtown Atlanta with his designs for the Atlanta Merchandise Mart, Peachtree Center, the Westin Peachtree Plaza Hotel, and SunTrust Plaza.

In the latter half of the 1980s, Atlanta became one of the early-adopters of postmodern designs which reintroduced classical elements to the cityscape. Many of Atlanta's tallest skyscrapers were built from the late 1980s to the early 1990s, with most displaying tapering spires or otherwise ornamented crowns, such as One Atlantic Center (1987), 191 Peachtree Tower (1991), and the Four Seasons Hotel Atlanta (1992). And at 1,023 feet (312 m), Atlanta's tallest skyscraper—the Bank of America Plaza (1992)—is the 61st-tallest building in the world and the 9th tallest building in the United States. [8]

More recently, Atlanta's built environment has been getting more eclectic and diverse. For example, 3344 Peachtree (2008) is more in the glass-walled modernist vein, while Millennium Gate (also completed in 2008) is the largest classical monument in the U.S. to have been dedicated since completion of the Jefferson Memorial in Washington, D.C. [9]

With the dawn of the twenty-first century, many former industrial buildings were repurposed for residential and retail use, many along the BeltLine, former railroad rights-of-way which became a ring of trails around the central city. Examples are Ponce City Market, Krog Street Market, Telephone Factory Lofts, Fulton Bag and Cotton Mills, King Plow and Goat Farm Arts Centers and many others, particularly in the Old Fourth Ward, Inman Park Village, Cabbagetown and Reynoldstown, and the Marietta Street Artery.

Arts facilities have led the way for modernists in Atlanta architecture with the High Museum designed by Richard Meier with a 2005 addition by Renzo Piano. A recent design competition resulted in Freelon Associates (in conjunction with HOK) being selected as the architect for the new $100 million home of the Center for Civil and Human Rights. Michael Graves' post-modern style is exhibited in the Ten Peachtree Place office building in Midtown and the Michael C. Carlos Museum on the campus of Emory University. The 50-story One Atlantic Center was designed by Philip Johnson in association with John Burgee. Completed in 1980, the Atlanta-Fulton Central Public Library was designed by one of the 20th century's most notable modernists architects, Marcel Breuer, who holds the distinction of having studied and taught at the Bauhaus, where early in his career Breuer first became a renowned furniture designer. Atlanta also has its own Flatiron Building, built in 1897, five years before the more famous Flatiron Building in New York City (1902). [10]

The classical Federal Reserve Bank of Atlanta at 1000 Peachtree Street

The Young Architects Forum of the Atlanta chapter of the American Institute of Architects sponsors open design competitions, exhibits, and lectures of interest to the profession and the general public.