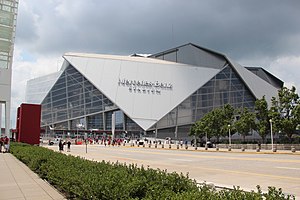 Sports in Atlanta has a rich history, including the oldest on-campus NCAA Division I football stadium, Bobby Dodd Stadium, built in 1913 by the students of Georgia Tech. Atlanta also played host to the second intercollegiate football game in the South, played between the A&M College of Alabama (now Auburn University) and the University of Georgia in Piedmont Park in 1892; this game is now called the Deep South's Oldest Rivalry. The city hosts college football's annual Chick-fil-A Peach Bowl and the Peachtree Road Race, the world's largest 10 km race. Atlanta was the host city for the Centennial 1996 Summer Olympics, and Downtown Atlanta's Centennial Olympic Park was built for and commemorates the games.

The Atlanta Braves baseball team has been the Major League Baseball franchise of Atlanta since 1966; the franchise was previously known as the Boston Braves (1912–1952), and the Milwaukee Braves (1953–1965). The team was founded in 1871 in Boston, Massachusetts as a National Association club, making it the oldest continuously operating sports franchise in North American sports.[ citation needed] The Braves won the World Series in 1995 and had an unprecedented run of 14 straight divisional championships from 1991 to 2005.[ citation needed]

Before the Braves moved to Atlanta, the Atlanta Crackers were Atlanta's professional baseball team from 1901 until their last season in 1965. They won 17 league championships in the minor leagues. The Atlanta Black Crackers (I) and Atlanta Black Crackers (II) were Atlanta's Negro league teams from 1919 until 1949. The Braves' Triple-A affiliate, the Gwinnett Stripers of the International League, has been based in the Gwinnett County suburb of Lawrenceville since 2009.

The Falcons have been Atlanta's National Football League franchise since 1966. The Falcons recently completed construction of a new retractable roof stadium, Mercedes Benz Stadium, playing their first pre-season game there on August 26, 2017. [1] They have won the division title six times in two different divisions (NFC West and current NFC South), and two conference championships, going on to lose to the Denver Broncos in Super Bowl XXXIII and the New England Patriots in Super Bowl LI. Super Bowl XXVIII, XXXIV, and LIII were hosted in Atlanta with the first two taking place in the now-demolished Georgia Dome.

The Alliance of American Football's Atlanta franchise, the Atlanta Legends, began play in 2019. They played at Georgia State Stadium, but the league's football operations were reportedly suspended and the team folded.

The Atlanta Hawks of the National Basketball Association began in 1946 as the Tri-Cities Blackhawks, playing in Moline, Illinois. The team moved to Milwaukee in 1951, then to St. Louis in 1955, where they won their sole NBA Championship as the St. Louis Hawks. In 1968, they came to Atlanta. [2] The Hawks' NBA G-League affiliate, the College Park Skyhawks, is based in College Park (immediately southwest of Atlanta).

The Atlanta Dream are a 2008 expansion team in the Women's National Basketball Association. From their inception until the 2016 season, the Dream shared Philips Arena with their NBA counterpart; however, the Dream moved to McCamish Pavilion on the campus of Georgia Tech due to renovations of Philips Arena conflicting with the WNBA schedule during the 2017 and 2018 seasons. After one more season in State Farm Arena (after the Philips was renamed during the renovations), they moved their home games to the new Gateway Center Arena for the 2020 season.

Atlanta was selected in April 2014 for an expansion team to join Major League Soccer and begin play in 2017. [3] The team, operated by Falcons owner Arthur Blank (co-founder of The Home Depot), shares Mercedes-Benz Stadium with the Falcons and is named Atlanta United FC. [4] In 2018, Atlanta United launched its reserve team, Atlanta United 2, in the USL Championship.

The original Atlanta Beat of the Women's United Soccer Association (WUSA, 2001–2003) was the only team to reach the playoffs in each of the league's three seasons.[ citation needed] The new Atlanta Beat made its debut in Women's Professional Soccer (WPS) in April 2010, and the following month played its first game in the new soccer-specific stadium that it shared with Kennesaw State University in the northern suburb of Kennesaw. WPS played its final season in 2011 and folded just before its scheduled 2012 season; the Beat folded along with the league and are not part of WPS' effective successor, the current National Women's Soccer League.

Atlanta was previously home to the Atlanta Silverbacks of the North American Soccer League and the Atlanta Silverbacks Women in the W-League. In 2007, the men's Silverbacks had their best season, advancing to the USL Finals against the Seattle Sounders. The women's Silverbacks won the league title in 2011. Both teams briefly ceased operations after the 2015 season, the men's team due to lack of ownership in the NASL and the women's team because the W-League ceased operations. New ownership came to the rescue prior to the 2016 seasons, as both have resurfaced in the NPSL and WPSL, respectively.

The Atlanta Chiefs won the championship of the now-defunct North American Soccer League in 1968. Atlanta United won the MLS Cup in 2018.

In 1972, The OMNI in Atlanta became home to the Atlanta Flames of the National Hockey League. In 1980, the team departed for Calgary, Alberta, as the Calgary Flames. In 1999, the NHL returned to Atlanta in the form of the Atlanta Thrashers. The Thrashers played in Philips Arena; however, the team moved to Winnipeg, Manitoba, and became the current Winnipeg Jets in 2011, again leaving Atlanta without an NHL franchise.

From 1992 to 1996, Atlanta was home to the short-lived Atlanta Knights, an International Hockey League team. Their inaugural season was excellent for a new team, and was only bested by their sophomore season in which they won the championship Turner Cup. In 1996, they moved to Quebec City, Quebec, and became the Quebec Rafales.

Since the Thrashers moved to Winnipeg, their former ECHL affiliate in Duluth, Georgia, the Atlanta Gladiators, became the area's only professional hockey team. The Gladiators moved to Gwinnett County in 2003 after seven seasons as the Mobile Mysticks, and has won three division championships, and a conference championship since 2006.

In 2015, Atlanta became the furthest south box lacrosse team in the National Lacrosse League (NLL) when John Arlotta moved the Minnesota Swarm franchise from St. Paul, Minnesota, to Duluth, Georgia, and renamed the team to the Georgia Swarm. [5] In the three seasons in the Atlanta market, they have made the playoffs each year, including in 2017 winning the National Lacrosse League Cup in 2017. [6]

Atlanta Rhinos of the USA Rugby League represent the city at rugby league. The club is linked with professional Super League club the Leeds Rhinos.

Atlanta is home to many rugby union clubs. On September 21, 2018, Major League Rugby, the top-level rugby union league in North America, announced that Atlanta was one of the expansion teams joining the league for the 2020 season. [9] The team name Rugby ATL was revealed on February 26, 2019. [10]

Other rugby union teams include the Atlanta Harlequins, who ranked number two in the United States in Division 1 for women's clubs under USA Rugby,[ when?] the governing body for rugby in the United States. [11] From 2014 to 2016, the suburb of Kennesaw hosted the USA Women's Sevens, an event in the annual World Rugby Women's Sevens Series in the sevens version of the sport, but that event has since moved to Las Vegas.

In the Arena Football League, the Georgia Force played in Philips Arena and Infinite Energy Arena in suburban Duluth since the franchise relocated from Nashville in 2002 until 2012.

The Atlanta Kookaburras are a successful Australian rules football club that compete in men's and women's divisions in the MAAFL and SEAFL and USAFL National Championships.

Atlanta is home to two of the nation's Gaelic football clubs, the Na Fianna and Clan na nGael Ladies' and Men's Gaelic Football Clubs. Both are members of the North American County Board, a branch of the Gaelic Athletic Association, the worldwide governing body of Gaelic games. [12]

Atlanta has a rich tradition in collegiate athletics, with two NCAA Division I programs in the city and a third in the metropolitan area.

The Georgia Tech Yellow Jackets participate in 17 intercollegiate sports, including football and basketball. Tech competes in the Atlantic Coast Conference, and is home to Bobby Dodd Stadium, the oldest continuously used on campus site for college football in the southern United States, and oldest currently in Division I FBS. [13] The stadium was built in 1913 by students of Georgia Tech.

The Georgia State Panthers, representing Georgia State University, field varsity teams in 16 sports, also including football and basketball. GSU, like Georgia Tech located within Atlanta proper, is currently in its second stint as a member of the Sun Belt Conference. It had been a charter member of the league in 1976, but left in 1981. In 2013, GSU returned to the Sun Belt from the Colonial Athletic Association. The Panthers play football at Center Parc Stadium, which was originally built as Centennial Olympic Stadium for the 1996 Olympics before being converted to Turner Field, a baseball stadium for the Atlanta Braves.

The Kennesaw State Owls, based in the northern suburb of Kennesaw, represent Kennesaw State University in 17 varsity sports in the Atlantic Sun Conference (ASUN). KSU did not start a football program until 2015. Since the ASUN has never sponsored football, KSU announced that the new football team would join the Big South Conference. [14] 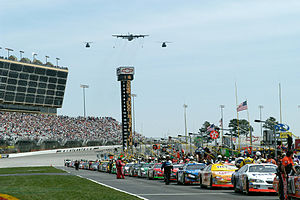 Racing facilities include Atlanta Motor Speedway, a 1.5 mile (2.4 km) NASCAR race track in Hampton, and Road Atlanta in Braselton. In 2005 Atlanta competed with other major U.S. cities for the NASCAR Hall of Fame. In March 2006, Atlanta lost to Charlotte, North Carolina.

In golf, the final PGA Tour event of the season, The Tour Championship, is played annually at East Lake Golf Club. [17] This golf course is used because of its connection to the great amateur golfer Bobby Jones, an Atlanta native.