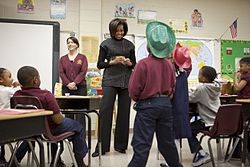 Atlanta Public Schools (APS) is a school district based in Atlanta, Georgia, United States. It is run by the Atlanta Board of Education with superintendent Dr. Lisa Herring.The system has an active enrollment of 54,956 students, attending a total of 103 school sites: 50 elementary schools (three of which operate on a year-round calendar), 15 middle schools, 21 high schools, four single-gender academies and 13 charter schools. The school system also supports two alternative schools for middle and/or high school students, two community schools, and an adult learning center.

The school system owns the license for, but does not operate, the radio station WABE-FM 90.1 (the National Public Radio affiliate) and the Public Broadcasting Service (PBS) public television station WPBA 30.

The Atlanta Board of Education establishes and approves the policies that govern the Atlanta Public School system. The board consists of nine members, representing six geographical districts, [3] and three "at-large" districts. One person is elected per district to represent the schools in a given district for a four-year term. Under the provisions of the new board charter, approved by the Georgia Legislature in 2003, board members elect a new chairman and vice chairman every two years. The day-to-day administration of the school district is the responsibility of the superintendent, who is appointed by the board. [4]

Established by ordinance of the Atlanta City Council, the Atlanta Public Schools opened three grammar schools and two high schools in 1872 to educate the white youth of the city. This brought the total number of schools offering free education to the city's children to seven, as the Freedman's Bureau had established two schools for black children in 1866.

Last week the moral siege of Atlanta (pop. 487,455) ended in spectacular fashion with the smoothest token school integration ever seen in the Deep South. Into four high schools marched nine Negro students without so much as a white catcall. Teachers were soon reporting "no hostility, no demonstrations, the most normal day we've ever had." In the lunchrooms, white children began introducing themselves to Negro children. At Northside High, a biology class was duly impressed when Donita Gaines, a Negro, was the only student able to define the difference between anatomy and physiology. Said she crisply: "Physiology has to do with functions."

In a 1964 news story, Time would say, "The Atlanta decision was a gentle attempt to accelerate one of the South’s best-publicized plans for achieving integration without revolution."

By May 1961, 300 transfer forms had been given to black students interested in transferring out of their high schools. 132 students actually applied; of those, 10 were chosen and 9 braved the press, onlookers, and insults to integrate Atlanta's all-white high schools.

Brown vs. the Board of Education of Topeka had established the right of African American students to have equal opportunities in education, but it was not until 1958, when a group of African American parents challenged the segregated school system in federal court, that integration became a tangible reality for students of color in Atlanta.

Adding to the accolades for the students and the city, President Kennedy publicly congratulated residents during an evening address and asked other cities to "look closely at what Atlanta has done and to meet their responsibility... with courage, tolerance and above all, respect for the law."[ citation needed]

In 2012, Atlanta Public Schools produced a documentary to honor the 50th anniversary of the district's desegregation efforts. [13] In January 1972, in order to settle several federal discrimination and desegregation lawsuits filed on behalf of minority students, faculty, and employees and reach satisfactory agreement with Atlanta civil rights leaders who had worked over a decade for a peaceful integration plan. Atlanta Public Schools entered into a voluntary agreement with the U.S. Department of Justice, with approval and oversight from the U.S. Department of Education, in an attempt to desegregate Atlanta Public Schools. In the late 1960s and early 1970s, a majority of Atlanta Northside public schools had either token integration, or none at all. Faculty and staff assignments to schools had remained mostly segregated as well.

With strict guidelines, oversight and timeline implementation of the voluntary desegregation plan, the federal courts agreed not to order and enforce system-wide a mandatory busing desegregation program for APS that had been federally enforced in other cities up to that time, most notably Boston and Philadelphia which resulted in widespread anti-busing violence in 1973-74 that Atlanta civil rights leaders desired to avoid. Along with this program for racial balance, the school system's first African American Superintendent, Dr. Alonzo A. Crim, took over leadership of Atlanta Public Schools in August 1973. He remained superintendent until his retirement in 1988.

The City of Atlanta, in 2017, agreed to annex territory in DeKalb County, including the Centers for Disease Control and Emory University, effective January 1, 2018. [14] In 2016 Emory University made a statement that "Annexation of Emory into the City of Atlanta will not change school districts, since neighboring communities like Druid Hills will still be self-determining regarding annexation." [15] By 2017 the city agreed to include the annexed property in the boundaries of APS, a move decried by the leadership of the DeKalb County School District as it would take taxable property away from that district. [14] In 2017 the number of children living in the annexed territory who attended public schools was nine. [16] The area ultimately went to APS; [14] students in the area will be rezoned to APS effective 2024; they will be zoned to DeKalb schools before then. [17]

During the 11-year tenure of former superintendent Beverly Hall, the APS experienced unusually high gains in standardized test scores, such as the Criterion-Referenced Competency Test. In 2009, Hall won the National Superintendent of the Year Award. Around this time, the Atlanta Journal-Constitution began investigating the score increases and suggested evidence of cheating. A state report found numerous erased answers in an analysis of the 2009 test scores. Tests were administered under much higher scrutiny in 2010, and the scores dropped dramatically.

The state of Georgia launched a major investigation as cheating concerns intensified. The investigation's report, published in July 2011, found evidence of a widespread cheating scandal. At least 178 teachers and principals at 44 APS schools were alleged to have corrected students' tests to increase scores, in some cases holding "cheating parties" to revise large quantities of tests. Hall, who had retired in June 2011, expressed regret but denied any prior knowledge of, or participation in, the cheating. [18] The new superintendent, Erroll Davis, demanded the resignation of the 178 APS employees or else they would be fired. The revelation of the scandal left many Atlantans feeling outraged and betrayed, [19] with Mayor Kasim Reed calling it "a dark day for the Atlanta public school system." [20] The scandal attracted national media coverage. [20] [21]