Waycross is the county seat of, and only incorporated city in, Ware County in the U.S. state of Georgia. The population was 14,725 at the 2010 Census. 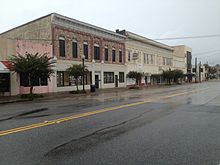 The area now known as Waycross was first settled circa 1820, locally known as "Old Nine" or "Number Nine" and then Pendleton. It was renamed Tebeauville in 1857, incorporated under that name in 1866, and designated county seat of Ware County in 1873. It was incorporated as "Way Cross" on March 3, 1874. [7] [8] Waycross gets its name from the city's location at key railroad junctions; lines from six directions meet at the city. [7]

The city council in Waycross opened municipal primary elections to women in 1917, the first town in Georgia to do so. [9] [10] This action was taken because some of the largest property owners in town were women who wanted a say in how their tax dollars were spent. [9] It wasn't until two years later in 1919 that Atlanta became the second Georgia city to do this. [9] Georgia women would not get the right to vote generally in all elections until 1922. [10]

Waycross was home to Laura S. Walker (1861-1955) a noted author and conservationist. Walker promoted a comprehensive program of forestry activity, including the establishment of forest parks. She erected markers and monuments along old trails and at historic sites, in Waycross and Ware County so that local history would not be forgotten. An effort to recognize her work culminated in President Franklin D Roosevelt issuing a proclamation to establish the Laura S Walker National Park in her honor. She was the only living person for whom a state or national park was named. [11] In 1937, the federal government purchased distressed farmland for the park. [12] [13] Work on the park was undertaken by the Works Progress Administration and the Civilian Conservation Corps. In 1941, the national park was deeded over to Georgia, becoming the State's 13th state park. [13]

Waycross was the site of the 1948 Waycross B-29 crash, which led to the legal case United States v. Reynolds (1953), expanding the government's state secrets privilege.

During the 1950s the city had a tourist gimmick: local police would stop motorists with out-of-state license plates and escort them to downtown Waycross. There they would be met by the Welcome World Committee and given overnight lodging, dinner and a trip to the Okefenokee Swamp. The tradition faded away after the interstates opened through Georgia. [14] [15]

In the mid-1990s, the Bubba Burger, a frozen hamburger that needed no defrosting, was created in Waycross. [16] This was the creation of Eaves Foods, Inc., a company that later changed to Bubba Foods, LLC. in 2000. Bubba Burgers are now sold nationwide as well as worldwide through the United States Military Commissary system. [17]

In May 2010, the city purchased the Bandalong Litter Trap and installed it in Tebeau Creek, a tributary of the Satilla River. The trap was invented in Australia, but is manufactured in the United States. Although the city has maintained a good standing with the state's Environmental Protection Division, the city wanted to take action to reduce the amount of human generated trash entering the Satilla River and ultimately the Atlantic Ocean. Georgia Governor Sonny Perdue said, "Water is one of Georgia's most important and precious resources... the litter trap installed by Waycross is a model of stewardship for the state and the nation." The Satilla River litter trap is the first in Georgia and only the second in the nation. [19]

WXGA-TV, a Georgia Public Broadcasting outlet, is licensed to Waycross and also serves nearby Valdosta.

Waycross is part of the Jacksonville, Florida television market.

Front of the old hospital

Back of the old hospital

With over 1,000 employees and 100 physicians, Satilla Regional Medical Center is a leading center in health care in the area. The three-story facility has a trauma unit, cancer care unit, outpatient surgery and imaging services. In 2012, Satilla Regional Medical Center joined the Mayo Clinic Health System and became the Mayo Clinic Health System in Waycross. Mayo Clinic ceased operations in 2015 of the hospital, which later joined HCA and now renamed Memorial Satilla Health. [25] 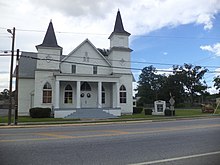 The Ware County School District holds pre-school to grade twelve, and consists of a pre-school, six elementary schools, two middle schools, and one high school. [27] The district has 431 full-time teachers and over 6,370 students. [28]

On the National Register of Historic Places: