Conyers is an Atlanta suburb and the only city in Rockdale County, Georgia, United States. The city is 24 miles (38.6 km) east of downtown Atlanta and is a part of the Atlanta Metropolitan Area. As of the 2010 census, the city population was 15,195. The city is the county seat of Rockdale County. [5] The formerly separate town of Milstead is now part of Conyers. 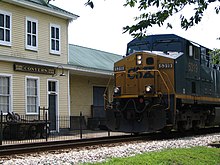 A 1905 Rogers Steam Locomotive, named "Dinky", on display in Conyers: The engine carried freight between Conyers and Milstead until 1961.

Between 1816 and 1821, the area known as Rockdale was open for settlement. John Holcomb, a blacksmith, was the first settler in what is now Conyers. He settled where the current Rockdale County Courthouse is located, in the middle of Conyers on Main Street.

Eventually, pressure arose for a railroad to cross Georgia; the railroad was intended to run from Augusta, through neighboring Covington to Marthasville (now known as Atlanta). John Holcomb was against the railroad and refused to sell his land, and threatened to shoot anyone from the railroad who came onto his property.

Dr. W. D. Conyers, a banker from Covington, eventually persuaded John Holcomb into selling his land for $700. Dr. Conyers then sold the land to the Georgia Railroad. What is now Conyers began as a watering post along this line, named after Dr. Conyers. By 1845, the railroad was in full operation. By 1854, nearly 400 residents lived around the watering post, and Conyers was incorporated.

Conyers has been nearly destroyed several times by fire. It is said to have survived Sherman's March to the Sea due to a friend of Sherman's who lived in the area between Conyers and Covington. The story goes that the houses were spared because Sherman was uncertain where his friend lived.[ citation needed]

In 1870, the surrounding area was incorporated into Rockdale County out of Newton County, Georgia, and Conyers became the county seat.

Over the next decade, Conyers grew into a wild town. It had 12 saloons and five brothels. The more reputable side of the town had 40 stores, Conyers College, a hotel, a carriage manufacturer, and good schools. 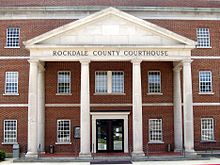 The Conyers post office contains a mural, The Ploughman, painted in 1940 by Elizabeth Terrell. Murals were produced from 1934 to 1943 in the United States through the Section of Painting and Sculpture, later called the Section of Fine Arts, of the Treasury Department. The Works Progress Administration was the largest and most ambitious American New Deal agency, employing individuals to carry out public works projects. [6]

Conyers was also home to "sidewalk churches". Along Main Street grew First Methodist, Conyers Presbyterian, and First Baptist. At some point, the congregants are thought to have persuaded the brothels and saloons to close and leave Conyers for Covington, using a mob. This rose out of revivals begun in 1878 with the Methodist and Presbyterian churches. First Baptist Church of Conyers moved out of downtown in late 2000, moving about 2 mi (3 km) south of the Georgia International Horse Park to their current location.

Tightly connected to Conyers is Milstead, a mill town now incorporated into Conyers. At its peak, Milstead and Conyers had a private railroad that delivered products, such as cotton, from the mill to Conyers for shipping to the textile mills. In the 1960s, the mill closed.

In 1944, a Trappist monastery (a Catholic order), Abbey of the Holy Spirit, was established south of the city by Dom Frederic Dunne. The Protestant community of Rockdale County helped with the completing of the current structure. M. Basil Pennington, one of the founders of the Centering Prayer movement, was abbot of the monastery from 2000 to 2002.

In the 1950s, Conyers had a Coca-Cola bottling facility. In 1957, Lithonia Lighting moved from Lithonia.

In the 1960s, Interstate 20 was built through the county. Gus Barksdale, Clarence Vaughn, Roland Reagan, and Harry Downs helped establish the community for the future by pushing for business expansion.

In the 1970s, parts of the first five episodes of the Dukes of Hazzard were filmed in the town.

In the 1980s, Conyers became known for "White Road", where resident Nancy Fowler claimed to have seen apparitions of the Virgin Mary. Throughout the late 1980s and early 1990s, Conyers played host to pilgrims.

In the early 1990s, several scenes of In the Heat of the Night were filmed around the Conyers Depot. Alan Autry, who played the character of Captain Bubba Skinner, was seen as a regular around Conyers during the filming.

In 1996, Conyers hosted the equestrian and mountain biking events for the 1996 Olympic Games held in Atlanta. For this, Conyers built the Georgia International Horse Park.

On May 20, 1999 a school shooting took place known as the Heritage High School shooting. Six students were injured before the 15-year-old gunman surrendered to the police.

In October 1999, Rockdale County, and by extension the county seat of Conyers, gained substantial notoriety when the Public Broadcasting Service series Frontline aired a nationwide documentary entitled The Lost Children of Rockdale County detailing a syphilis outbreak among middle- and high-school-aged teenagers within the county. [7] The documentary was well received outside Conyers, with rave reviews from such outlets as the Wall Street Journal and Entertainment Weekly; Interviewed by Oprah Winfrey. [8]

In 2010, Conyers was thrust into the spotlight when identical twins and former residents Tasmiyah Janeesha Whitehead and Jasmiyah Kaneesha Whitehead (both born November 27, 1993) were arrested on May 21, 2010 for having committed matricide. The victim was Jarmecca Yvonne Whitehead (born April 18, 1975), who also went by the nickname "Nikki". She was beaten and stabbed and placed in a tub full of water where her daughters left her to die as they left for Rockdale County High School. The crime occurred on January 13, 2010, in the Bridle Ridge Walk subdivision on Appaloosa Way. The crime sent shockwaves throughout the community. Jarmecca's autopsy revealed that she suffered injuries to her lungs and jugular vein, and had a severed spinal cord. Initially, the twins proclaimed their innocence, but in 2014, they pleaded guilty and are serving 30-year sentences in separate prisons. The crime was featured in a few true-crime documentaries and television shows, which include Dateline NBC in an episode titled "Bad Blood", Snapped episode 1403 titled "The Whitehead Twins", and Evil Twins in an episode titled "Honor Roll Killers", a show that airs on the Investigation Discovery network (see also Murder of Nikki Whitehead). [9]

As of 2013, the CW show The Originals began filming in Conyers.

Georgia Revolution FC is a semi-professional soccer team based in Conyers, Georgia. The team was founded in 2010 and is a member of the South Atlantic Conference of the National Premier Soccer League (NPSL), the fourth tier of the American soccer pyramid. Games are played in the summer months at the Rockdale Youth Soccer Association.