The Atlanta Dream are an American professional basketball team based in Atlanta, Georgia, playing in the Eastern Conference in the Women's National Basketball Association (WNBA). The team was founded for the 2008 WNBA season. The team is owned by Dream Too LLC, which is composed of two Atlanta businesswomen: Mary Brock and U.S. Senator Kelly Loeffler. Although the Dream share the Atlanta market with the National Basketball Association's Hawks, the Dream is not affiliated with their NBA counterpart. The Dream play at the Gateway Center Arena in College Park, Georgia.

The Dream has qualified for the WNBA Playoffs in nine of its 12 years in Atlanta and has reached the WNBA Finals three times. The franchise has been home to many high-quality players such as University of Louisville standouts Angel McCoughtry and Shoni Schimmel, former Finals MVP Betty Lennox, and Brazilian sharpshooter Izi Castro Marques. In 2010, the Dream went to the WNBA Finals but fell short to Seattle. They lost to the Minnesota Lynx in the 2011 and 2013 WNBA Finals.

Even before the success of the United States women's basketball team in the 1996 Olympic Games, the American Basketball League had interest in placing a women's professional basketball team in Atlanta as early as 1995. [4] Eight of the twelve Olympians played on ABL teams when the league began play in October 1996. [5] The Atlanta Glory played at Forbes Arena and lasted two seasons before folding before the start of the 1998–99 season, which would be the ABL's final.

Atlanta had been mentioned as a possible future city for WNBA expansion, but efforts did not come together until the beginning of 2007 when an organizing committee with Atlanta businessmen and politicians began the effort to attract an expansion team. [6] The inability of the Atlanta Hawks of the NBA to draw crowds was a concern of the WNBA, and the committee kicked off an effort in February 2007 to gain volunteers and petition signatures. Philips Arena (now State Farm Arena), the Gwinnett Arena (now Infinite Energy Arena) and Alexander Memorial Coliseum (now McCamish Pavilion) were candidates for venues. By May 2007, the committee had over 1,000 pledges for season tickets, although the goal was 8,000 season tickets in ninety days. [7] [8] By July the committee had 1,200 commitments and began searching for an owner. [9] 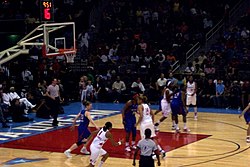 On October 16, 2007, it was reported that Ron Terwilliger, an Atlanta businessman and CEO of a national real estate company would be the future owner of an Atlanta franchise. The next day, at a news conference at Atlanta's Centennial Olympic Park, WNBA president Donna Orender made the announcement that Atlanta would officially be granted a WNBA expansion franchise. [10]

On November 27, 2007, Atlanta named Marynell Meadors, a coach with extensive experience at the college level, the first head coach and general manager in franchise history. This was Meadors' second role as a coach/general manager in the WNBA following a stint with the Charlotte Sting. Afterwards, Meadors had served as a scouting director for the Miami Sol and had been an assistant coach under Richie Adubato and Tree Rollins for the Washington Mystics. [11] Former NBA player Dennis Rodman volunteered his name as head coach for the Dream. Terwilliger declined, stating that he wanted someone with more coaching experience and he felt that the head coach should be a woman, as the WNBA was a women's league. [12]

On December 5, 2007, an online contest was announced for people to vote on the team name and team colors, while the final choice rested with owner Ron Terwilliger. The names offered as choices were "Dream", "Flight", "Surge" and "Sizzle". There were also options for team colors such as lime green or hot pink. [13] On January 23, 2008, the team name was announced as the Dream, inspired by the famous speech of Atlanta native Martin Luther King Jr., [14] and the team colors were sky blue, red, and white. [15]

Atlanta held their expansion draft on February 6, 2008 when they selected one player from each of the 13 teams in the league. Atlanta traded Roneeka Hodges and their number four pick in the 2008 WNBA Draft to the Seattle Storm for Izi Castro Marques and Seattle's eighth pick in the 2008 WNBA Draft. Also, the Dream traded the 18th pick and LaToya Thomas to the Detroit Shock for Ivory Latta.

From May 17, 2008, with a season opening loss against the Connecticut Sun to July 3, 2008, with a home loss against the Houston Comets, the Dream lost 17 consecutive games, setting the WNBA all-time record for both consecutive losses and losses from opening day. The 2006 Chicago Sky had previously lost 13 consecutive games, and the 2002 Detroit Shock had opened their season 0–13. On July 5, the Dream earned their first win in Atlanta 91–84 against the Chicago Sky, ending the losing streak. They later finished with a 4–30 record.

Not wanting a repeat of 2008, head coach and general manager Marynell Meadors acquired players such as Sancho Lyttle, Nikki Teasley, Chamique Holdsclaw, Angel McCoughtry, and Michelle Snow in the 2008–2009 offseason. In 2009, Atlanta reached the playoffs at 18–16, exceeding their previous record by 14 wins, but lost in the first round to the 2008 champion Detroit Shock in a sweep. After the season, their coach, Marynell Meadors, was awarded the Coach of the Year Award.

The Dream's owner, Ron Terwilliger, announced in August that he wanted to give up his position as the primary owner of the Atlanta franchise. On October 29, 2009, Kathy Betty took control of the team under the business entity Dream Too, LLC. [16]

The 2010 season saw further improvement, finishing in fourth place in the Eastern Conference. The Dream then made it through the first two rounds of the playoffs and secured a trip to the WNBA Finals with a win over the New York Liberty, as they swept New York in two games in the Eastern Conference Finals. They eventually faced the best team in the league, the 28–6 Seattle Storm. Seattle took the first two games at home with two close wins. Seattle completed the sweep and won the series in Atlanta. [17] Even though they were swept, the Dream did not lose any game by a margin of more than three points.

Addressing arguably Atlanta's biggest concern, the team traded for All-Star point guard Lindsey Harding prior to the 2011 season. Despite the addition, the Dream struggled to open the season, starting with a 2–7 record due to an injury that sidelined Angel McCoughtry and overseas commitments by Sancho Lyttle. The team then went on a run of 14 wins and 5 losses after the All-Star break. They carried that momentum into the playoffs, sweeping the Connecticut Sun and defeating the Indiana Fever to return to the WNBA Finals. However, they lost to the 27–7 Minnesota Lynx in three games.

During the 2011 season, Betty sold Dream Too LLC to local investors Mary Brock and Kelly Loeffler. [18]

The Dream started the 2012 season with a 12–12 record and fired head coach and general manager Meadors during a dispute with league-leading scorer Angel McCoughtry. [19] [20] Meadors was replaced by Fred Williams, finished with a 19–15 record, and lost in the first round.

The following 2013 season, the team again made it to the WNBA Finals, and again were swept by the Lynx. Williams' contract was not renewed. [21] [22]

On October 18, 2019, the Dream unveiled an updated logo and color scheme, the first change to their branding since the team's inception in 2008. [24]

The Dream played at Philips Arena, now known as State Farm Arena, in downtown Atlanta, shared with the Atlanta Hawks from 2008 to 2016. In 2013, the team qualified for the WNBA Finals, but a scheduling conflict forced them to play home games at The Arena at Gwinnett Center, now known as Infinite Energy Arena, in suburban Duluth. Due to renovations to Philips Arena during the Hawks' 2017 and 2018 offseasons, the Dream played home games at McCamish Pavilion on the campus of the Georgia Institute of Technology.

The team returned to the renovated and renamed State Farm Arena for the 2019 season. [25] Following the conclusion of the 2019 WNBA regular season, team officials indicated that the Dream would not be returning to State Farm Arena for the 2020 season, citing disagreements with the Hawks' management. [26] The team announced on October 18, 2019, coinciding with their rebranding, they would move to the new Gateway Center Arena in nearby College Park for the 2020 season (later delayed to the 2021 season), sharing the arena with the Hawks' NBA G League affiliate, the College Park Skyhawks. [24]

Currently, some Dream games are broadcast on Fox Sports Southeast (FS-SE) and FOX Sports South (FS-S).[ citation needed] All games (excluding blackout games, which are available on ESPN3.com) are broadcast to the WNBA LiveAccess game feeds on the league website. Furthermore, some Dream games are broadcast nationally on ESPN, ESPN2 and ABC. The WNBA has reached an eight-year agreement with ESPN, which will pay right fees to the Dream, as well as other teams in the league. [32]