From Wikipedia, the free encyclopedia
"The A" redirects here. For the Latin character, see A. For other uses, see A (disambiguation).
city nicknames 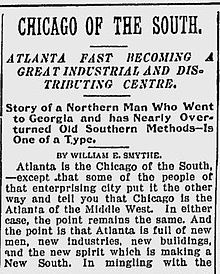 "Chicago of the South"

An 1859 industrial journal was among the first to note nicknames for Atlanta, Georgia: [1]

An orator claimed for it the signification of "a city among the hills" while a writer has declared that it was the opposite of "rus in urbe" ("country in the city") and proclaimed it "'the city in the woods".

Since then, the city has known numerous nicknames. As of the 2010s, The ATL, and The A are the most prevalent.

Nicknames of other Atlanta areas

"The Watermelon 500" is trucker CB slang for the Interstate 285 loop around Atlanta.

SWATS, The S.W.A.T.S. or S.W.A.T.S. ("Southwest Atlanta, too strong") [32] [33] is, in street, hip-hop, or local contexts, Southwest Atlanta, plus territory extending into the adjacent cities of College Park and East Point.[ citation needed] The term "SWATS" came into vogue around 1996[ citation needed] and was initially made popular by LaFace Records groups OutKast and Goodie Mob. [34] [35] This was the same time that "ATL" became popular as a nickname for Atlanta as a whole. [36]

Goodie Mob song "I Refuse Limitation" states "SWATS G.A. by way of Cascade Heights", while their song "Goodie Bag" states "Cause in da SWAT's red hots don't drip or bleed", and in "All A's", Cee Lo Green's chorus states "But don't you dare ride through the SWATS without, at least 30 shots". [35]

Erick Sermon rapped "I'm in New York now but I represent the SWATS and A-Town.", in his song "Future Thug" from his sixth solo album ' Chilltown, New York' in 2004.

Media and artists named after SWATS

S.W.A.T.S. is the name of a 2010 web television series by Golden Street Entertainment taking place in Southwest Atlanta. [33]

Young Ju King of da SWATS is an artist featured on ReverbNation. [38]

Also referenced as location of "Gina's Beauty Shop" in the movie with Queen Latifah.

Nawf Atlanta, or Nawfside is, a term popularized by rap trio Migos in reference to their place of origin Gwinnett County, which is located North of the City of Atlanta proper. [39]