Zoo Atlanta (sometimes referred as Atlanta Zoo) is an Association of Zoos and Aquariums (AZA) accredited zoological park in Atlanta, Georgia. The current President and CEO of Zoo Atlanta is Raymond B. King. 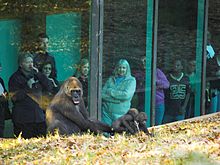 Zoo Atlanta was founded in 1889, when businessman George V. Gress purchased a bankrupt traveling circus and donated the animals to the city of Atlanta. City leaders opted to house the collection in Grant Park, which remains the zoo's present location. Original residents of the zoo included a black bear, a raccoon, a jaguar, a hyena, a gazelle, a Mexican hog, lionesses, monkeys, and camels. [2] The zoo's collection expanded in the 1930s with the personal donation of a private menagerie owned by Asa G. Candler, Jr. [3]

The 1950s and 1960s were decades of renovation and construction at the zoo, but by the early 1970s, many of its exhibits and facilities were outdated and showing signs of disrepair. In 1970, a small group of concerned citizens founded the Atlanta Zoological Society in hopes of raising funds and awareness for the institution.

Following a period of decline in the mid-1980s, the zoo was privatized in 1985 with the creation of a nonprofit organization, Atlanta Fulton-County Zoo Inc., and was renamed Zoo Atlanta that same year. A 20-year period of aggressive restoration followed, marked by several high-profile exhibit openings, including The Ford African Rain Forest, in the late 1980s and early 1990s. A pair of giant pandas, Lun Lun and Yang Yang, made their debut at Zoo Atlanta in 1999. [4] 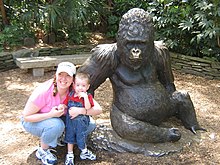 Families often pose with one of the Willie B. bronze statues at Zoo Atlanta.

Twenty-one western lowland gorillas have been born at the zoo since the opening of The Ford African Rain Forest in 1988. Kali and Kazi, a rare set of twins, were born at Zoo Atlanta on October 31, 2005. [5]

The Living Treehouse is an extension of The Ford African Rain Forest completed in 2004. The exhibit houses an aviary of African birds, as well as black-and-white ruffed lemurs and ring-tailed lemurs, with adjacent habitats for Angolan colobus monkeys, drills, Schmidt's guenons, and Wolf's guenons. In 2017, Zoo Atlanta introduced two crowned lemurs.

Zoo Atlanta’s African Savanna, opened in 1989 as African Plains and reopened and renamed in 2019, houses wildlife native to the grasslands and desert of Africa, including lions, African bush elephants, southern ground hornbills, kori bustards, meerkats, and warthogs. Another savanna landscape is home to giraffes, zebras, and ostrich. Also featured is a naked mole rat colony housed in its own building. A giraffe feeding experience opened in 2012. The former elephant habitat will become an exhibit for a new species of animal, the Southern white rhinoceros. [8] The rhinos will come here for the first time this year. Mumbles the rhino has come to Zoo Atlanta from the Houston Zoo on May 20, 2020. 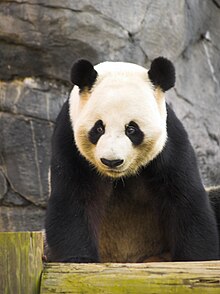 A sixth and seventh cub, both female, were born September 3, 2016. Their names were announced on their 100th day of life: Ya Lun and Xi Lun. Like their older siblings, the twins will return to China once they are fully grown and weaned, likely between 3–5 years of age.

The Orangutan Learning Tree Project, launched at Zoo Atlanta in 2007, utilizes in-habitat touch screen technology to allow orangutans to engage in computer puzzles, games and problem-solving exercises while guests observe their activities on a linked monitor. [14]

The World of Reptiles

The Zoo Atlanta herpetology department manages more than 450 reptiles and amphibians representing over 100 species, though because of the size of the World of Reptiles exhibit building, not all of these animals can currently be displayed. The zoo is the only zoological institution to successfully breed Arakan forest turtles, a critically endangered species harvested nearly to extinction for food and traditional medicine. A rare Guatemalan beaded lizard hatched at Zoo Atlanta in March 2012.

In 2009, the Association of Zoos and Aquariums noted that "the facility is a major concern primarily because of age." The World of Reptiles once housed critically endangered gharial (a species of crocodile from India), but because the aging facility could not maintain adequate heat, they were sent to other zoos.

Construction began in 2013 on Scaly Slimy Spectacular: The Amphibian and Reptile Experience, replaced the World of Reptiles. The exhibit opened in 2015. [15]

Opened in April 2009, Boundless Budgies houses free-flying parakeets which guests are permitted to hand-feed. This exhibit closed permanently in November 2016 to allow for development of the upcoming African Savannah project. [16]

Zoo Atlanta is a participant in the AZA Species Survival Plan for the following programs:

Zoo Atlanta also participates in several international conservation initiatives, among them the Asian Turtle Crisis and Global Amphibian Decline. Staff members from Zoo Atlanta and the Atlanta Botanical Garden have established captive assurance colonies of Panamanian frogs threatened by the spread of chytrid fungus. (Chytrid is the cause of the infectious amphibian disease chytridiomycosis.) [17]

Dr. Terry Maple is Zoo Director Emeritus of Zoo Atlanta. In 1985, he assumed management responsibility for zoo operations of the Atlanta-Fulton County Zoo, Inc, which was privatized and rebranded as Zoo Atlanta. [18]